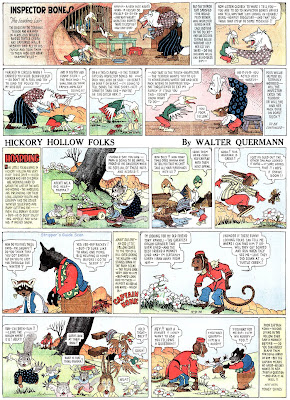 One of the true gems of that niche of newspaper cartooning that is the local strip, Hickory Hollow Folks ran only in the St. Louis Post-Dispatch. Walter Quermann's visual feast of a strip might have been created as a showcase for the Post-Dispatch's unusually fine printing quality used in their Sunday magazine section, a version of color rotogravure that used slick paper and vivid inks. It certainly did take full advantage of the upscale presentation. Quermann drew in the style of animated cartoons and often used unusual and inventive layouts that would have been impossible for syndicated strips that need to be chopped up into a multiplicity of formats.

The feature was originally titled Toy Talkies when it debuted in 1932 and initially featured a cast of living toys. At that time it was a text feature with color illustrations and ran in a tiny quarter-page format. By 1934 the text feature had been renamed Hickory Hollow Folks and the main characters were now woodland creatures, but it wasn't until 1938 that the feature was transferred to the Sunday comics section and became the more typical Sunday page you see above.

Quermann's creation didn't get much respect in the Post-Dispatch's funnies section. Whenever an ad was run it was invariably Hickory Hollow Folks that got chopped down to a half, third or even quarter page format. Since it was produced locally I can imagine someone dropping by Quermann's desk on a weekly basis to tell him how much space he was being granted for his next episode. Quermann must have loved doing the feature because as a staff artist with other duties I imagine he could have asked to drop it as being too much trouble considering how undervalued it obviously was.

Hickory Hollow Folks ran until 1955 when its creator died 'in harness' as they say. Quermann's feature was a favorite of many St. Louis residents and the classic feature is still sought as a collectible by those who remember it fondly. Unfortunately examples of it are ridiculously hard to come by. Not only did it appear in a single paper, but it ran in a roto section for much of its life (in addition to the 1932-38 magazine section period, the Post-Dispatch revamped their funnies section to use the rotogravure process after the war) and rotogravure paper does not survive well unless stored in ideal conditions. This double-whammy makes the strip a rarity, and even when you do find a cache of them they're often in terrible condition.