January 7 1910 --Ad Wolgast is set to face George Memsic tonight at the Naud Junction boxing arena. Herriman suggests in this sports editorial strip that Ad, who is the heavy favorite, just might lose and then all his plans for continuing his climb up the boxing ladder will be in a shambles.

As it turns out, Wolgast will beat Memsic tonight, making him the winner of his last nine bouts. It will not be until a few more fights down the road when Wolgast's luck will run out.

Obscurity of the Day: Dijever 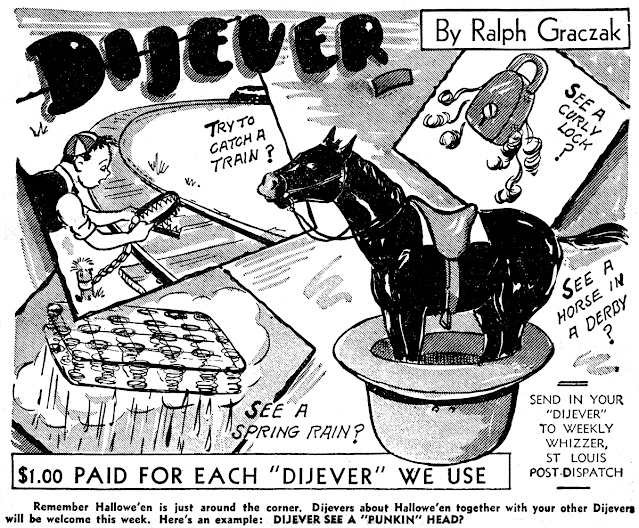 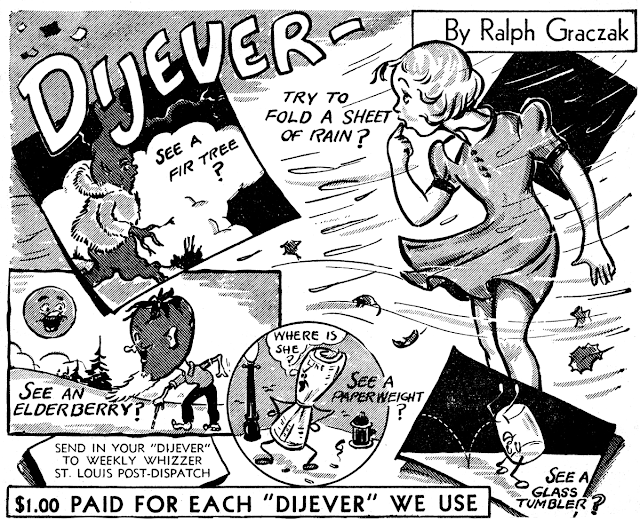 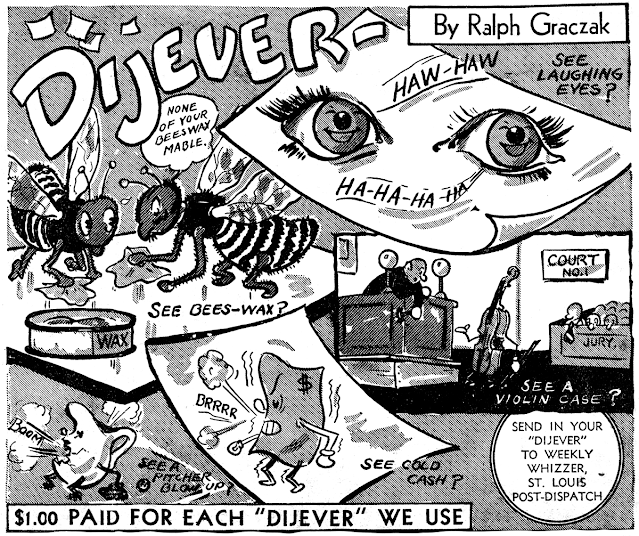 Before creating the long-running Our Own Oddities for the St. Louis Post-Dispatch Sunday comics section, Ralph Graczak was the illustrator of a weekly feature titled Dijever. The feature asked readers to submit puns which Graczak would illustrate. The idea was to complete the phrase "Did you ever ..." with a term, usually two words, where the meaning changes if you treat one of the words as a verb. Look at the samples to get the idea of how it worked. It was a cute idea, and Graczak did his best to eke out a little extra humor from the illustrations.

The feature ran on a Saturday kids page called the Weekly Whizzer, debuting with the page of June 18 1938. Graczak made it a bit less than a year before the Dijever feature was canned in favor of new contest. The last panel ran on March 4 1939.

This is one of those features that I have trouble with. Is it worthy of inclusion in my listings? If Graczak himself were penning the puns, then no problem. But since he was just illustrating reader submissions that sort of makes this an 'activity feature', which my self-imposed rules disqualify. Yes, I know, if that's the worst problem I have, then things are looking pretty darn bright...

Comments:
I note that while he invites reader submissions, offering $1 for each they use; that none of these examples list a submitter. I had always thought that part of the appeal of these sorts of contests were getting one's name in the paper.

Good ppoint Steven, but if memory serves the contributor names were listed in text. That Whizzer page had so many contests going on I seem to recall they had a boxed area just to list off the winning names.

Hello Allan-
This reminds me of Bil Keane's "Sideshow" which was an assortment of play-on-words gags just like these, in fact he often used the tag line "PUN-ishment inflicted by Bil Keane" in the feature, which was usually a rectangle attached to the Sunday FAMILY CIRCUS in the 1960s. They too, were mostly sent in by readers, whose name and city were included, and I think they might have got a small dollar prize. They were pretty bad; gags like a pig in an apron posing like Jolson, "PURE MA HOG ON KNEE"... or Karl Marx's grave, "ANOTHER RED PLOT". I knew Keane, slightly. He loved this kind of stuff. He said he dropped "Sideshow" because after a while, reader contributions were slacking off, and too many repetitons among the ones that did. 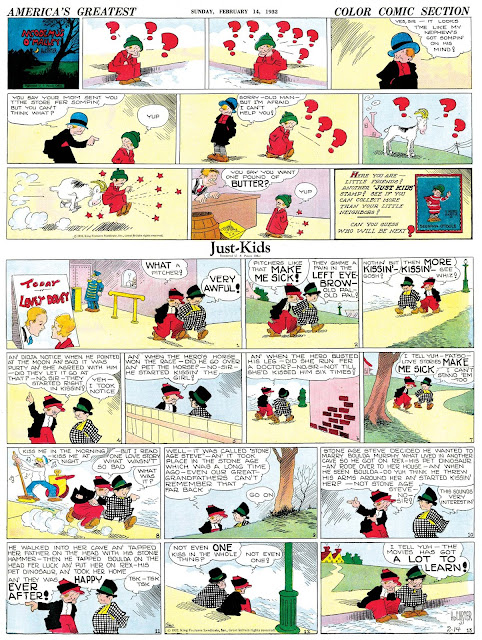 Unlike most cartoonists working for King Features, Ad Carter, the creator of Just Kids, seemed to know almost exactly what he wanted to do when the syndicate decreed that all Sunday pages would have topper strips added. On May 16 1926* Just Kids gained a topper that would last until the strip eschewed toppers altogether almost two decades later.

The topper was titled Nicodemus O'Malley (originally titled Nicodemus O'Malley's Uncle for the first two episodes) and it took one of the minor players from the main strip and simply moved him into a starring role on Sundays. Nicodemus was a younger kid than the rest of the gang, always getting into scrapes and trouble. His uncle was there to keep him in line and offer sage advice.

The relationship is a little murky. Nicodemus was, as best I can tell, the nephew of Mush Stebbins, the star of the main strip. Oddly, though, when Mush played the wise uncle in the topper, he was fitted with a bowler hat and never that I've seen referred to by name. Maybe this was a different uncle than Mush? I dunno.

It's relationship to the characters in the main strip notwithstanding, the dynamic between the two was very much like that between Skippy and Sooky in Percy Crosby's Always Belittlin', a topper strip to Skippy that debuted about six months after Nicodemus O'Malley.

The tiresomely fomulaic strip had little to recommend it until a decade later, when suddenly Ad Carter woke up to the fun he could have if he injected a fantasy element. On March 29 1936** the strip was retitled Nicodemus O'Mally and his Pet Whale Palsy-Walsy, taking little Nicodemus to the seas, riding on the back of his new-found friend all over the world. The strip finally gained visual interest, a sense of fun, and much better gags. I hope it is not too much of an insult to Ad Carter, but it makes me wonder if this burst of creativity speaks to a ghost coming on board.

In the 1940s topper strips started to fall out of favor with newspapers. They had the excuse of wartime paper shortages, but the primary reason was that those third-page holes made good spots for advertising. Ad Carter, probably recognizing the futility of putting a lot of effort into toppers, dropped Palsy-Walsy and the whole fantasy element on August 18 1940***. The topper remained, but went back to its boring old self, now with a slightly more mature Nicodemus and no uncle in sight. The topper drifted along for almost two more years, appearing in fewer and fewer papers, until Carter decided to give up on toppers altogether. The last Nicodemus O'Malley topper ran on April 19 1942***.

Comments:
Hello Allan-
Mush was originally the star of his own series, "Our Friend Mush" in the waning days of the Philadelphia Inquirer syndicate. Do you think there was any problem with, at the time, confusion over who owned the character? I know that eventually, the strip reverted to using his name, as in your post of 14 March 2006:

Hi Allan. I just discovered your site today through a link on Reddit. Very fascinating and engrossing and I'll admit I've fallen down a real rabbit hole here.

Having said that - I was wondering if you knew of a strip (or longer comic) I saw as a kid in 1975. It appeared in some kind of "annual" or a yearbook that my ma picked up at maybe a garage sale in Nashville that summer, for something to entertain me at the hotel we stayed at that summer. Anyway, one particular comic stayed with me, and it involved a girl who...excuse my hazy memory ...was sort of a detective? Our heroine was decidedly frumpy, a bit chubby, possibly bespectacled, and, what I remember most - rode around on a penny-farthing bicycle. Her name may have even BEEN Penny Farthing. It was drawn in the semi-realistic, linear comic style common to the late 60's/early 70's, and if I recall correctly, colored in a two-tone (black lines with brown or sepia coloring) print. Unlike my other childhood books, this one unfortunately disappeared somewhere, likely recirculating back into the realm of garage sales. Again, apologies for the foggy memory, but the one element I can definitely ride on is the Penny Farthing.

Thanks for the cool site, and I hope you can help. It's a mystery almost 50 years in the making.

Hello Allan,
The description that e r offers, the "annual", the coloring, and the character all point to some British publication, wouldn't you say?

I definitely agree that it sounds like one of those British comics. ER needs to find someone who is into that stuff; I'm definitely not.

Thanks, guys. Agreed about the British "annual" thing - I've seen them and they're dreadful.

Wish You Were Here, from Charles Schulz 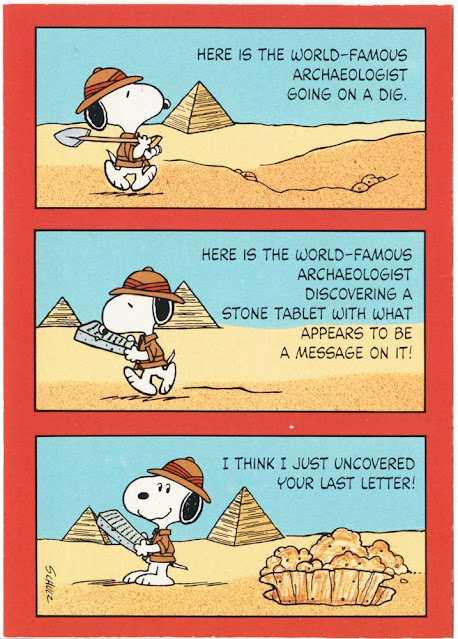 Hallmark published quite a few Peanuts postcards. This one is marked 204-1 on the back. The cards are undated, but I'm guessing, what, 1990s? Good gag card to send to a recalcitrant correspondent!