January 18 1910 -- A rare occasion this, Herriman not only provides the cartoon but also writes the copy for a review of a programme of Vaudeville at the Orpheum. Unfortunately I screwed up and cut off part of the article, but you certainly get the flavor of Garge's prose. It is so convoluted and full of wordplay that it is pretty useless as a review, but it certainly is fun to read!

Obscurity of the Day: Sissy

Ray Doherty seems to have gotten the syndicate bug when he tried to self-syndicate his one-panel gag cartoon Nuttibits, in 1941. Nuttibits didn't set the world on fire, but in 1944 Doherty was back, trying to syndicate Woody Cowan's Sissy, today's obscurity.  This strip was no great shakes either, but the little girl menace strip managed to find a few clients, including the Chicago Daily News.

By early 1945, with the Daily News already having dumped it, Doherty changed tactics and re-offered Sissy, this time as a weekly feature. The material for this re-offering was free to him, because he was just reselling the material already produced by Cowan. Doherty didn't even bother to remove the old date slugs. Once again, he got a few takers but now the revenue would have been truly paltry.

Doherty kept offering the strip in 1946, though I haven't seen anyone running the strip past 1945. He also solicited a new strip called Red Diamond, a daily adventure strip that, in the E&P article, sounds sort of interesting, but I've never found it actually running anywhere.

Ray Doherty Syndicate seems to have hung around for a few more years, but I haven't located any other comics he successfully syndicated.

Looping back to Sissy, I don't know if Woody Cowan is the same guy as Wood Cowan, who did many strips back in the 1910s, then the long-running Mom 'n' Pop, and then wrote Our Boarding House for a few years after the departure of Gene Ahern. If he is, and I'm guessing it is him, his first known syndicated feature began in 1914, making him quite the veteran by this time.

Anyone with additional informtion on Ray Doherty, a definite answer to whether Wood and Woody Cowan are the same guy, running dates for Sissy (daily and weekly versions), or any sightings of Red Diamond, will find attentive ears here. I don't ask for much, do I?

Comments:
Hello Allan-
"Woody" also did PSA series in 1944-6 for Treasury department War Bond pitches called "American Heroes", which appeared in low wattage weekly papers.
I think it's a safe bet this is the one and only Wood Cowan, the high foreheads and dot eyes on the girls seems very typical of his style.

Sissy and Mom ‘n’ Pop were created by Wood Cowan a.k.a. Woody Cowan. He was my grandfather.

Obscurity of the Day: Makin' B'lieve 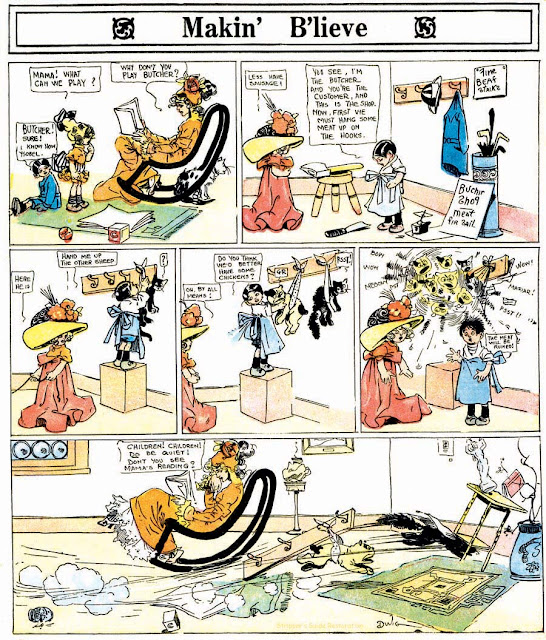 Dwig very seldom produced second rate material, but I must reluctantly place Makin' B'lieve in that category. Penned for the New York World's Sunday funnies section from June 2 1912 to January 26 1913, the strip always ran in a quarter page format that might have made him felt like he was merely producing filler (those quarter pages had been introduced to accommodate the occasional quarter-page ads that had started to appear in the Pulitzer Sunday sections).

The plot was simple and repeated each week with rote regularity; kids come up with a pretend scenario, start acting it out and then some low-key mayhem takes place. Dwig was a master of the mayhem scene, as proven in School Days and other features, but in Makin' B'lieve it was like the economy bargain basement version of mayhem, barely a hair out of place as compared to his normal anarchy.

On a side note, Dwig seems to have invented the idea of ultra-modern sleek furniture design with that rocking chair. It only took nearly a hundred years for someone to actually produce it: 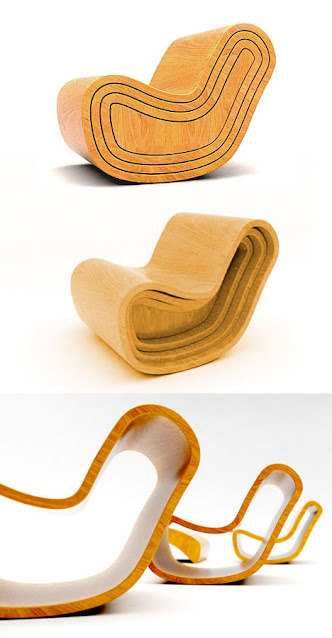 Comments:
I suggest there was a real chair of that design, which Dwig saw somewhere and incorporated for a little visual novelty. It seems unlikely a cartoonist would invent something like that and use it for a generic prop, especially when the rest of the furniture is utterly conventional. It might even be an early case of product placement.

I'm no expert, but that does look much more minimalist than usual for the time. I *think* that sort of design only started to catch on with modernism post 1920 (the Bauhaus having been founded in 1919). Skimming through some Google searches, it definitely seems that way, but again, I know very little. 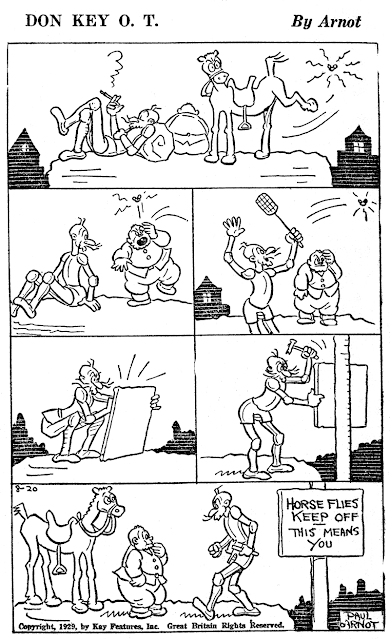 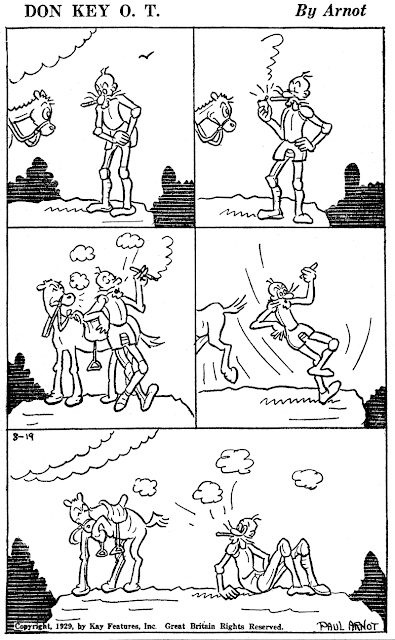 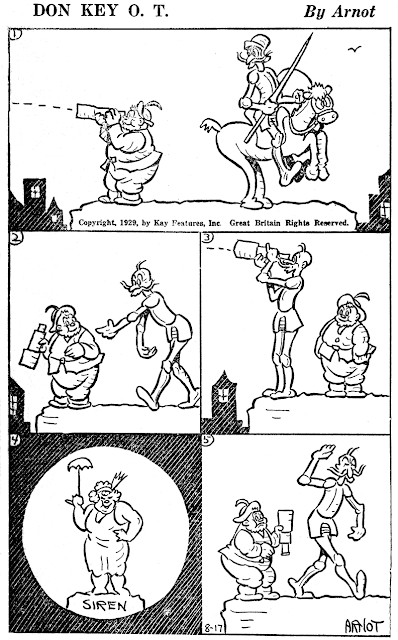 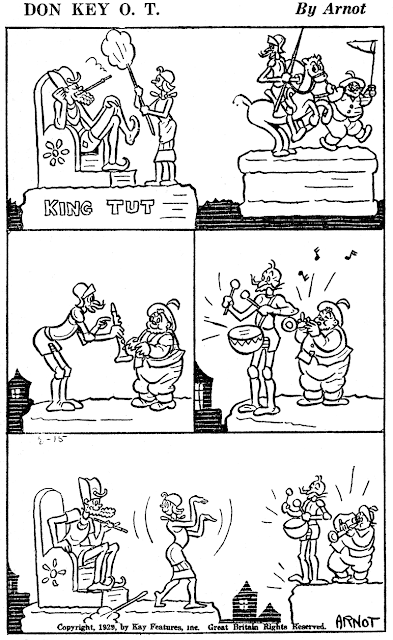 J. P. Arnot's classic pantomime strip The General (check out part 1, part 2, part 3, part 4 of a Stripper's Guide series on the strip), which starred, of all things, a statue, is a tour de force and a favorite of mine. Unfortunately when Arnot returned to the concept later, this time upping the ante by offering three characters (Don Quixote, Sancho Panza, and of course, the horse) the concept fell on its face.

Why? Perhaps in the intervening years Arnot's imagination had lost its fertility, or maybe the chump change he got for producing it made him unwilling to put the effort in, or perhaps his boss forced him to resurrect the strip and his heart was simply no longer in it. Whatever the reason, as you can see from the strips above, they barely even offer anything you can call a gag.

This was Arnot's last syndicated strip, coming after a hugely productive decade and a half in which he was often producing two daily strips in tandem. He'd been in the Hearst bullpen since 1916, and after the last of his strips got the can in 1928, he was lured off the reservation by Moses Koenigsberg.

Koenigsburg, as we know from his autobiography that ran here on Stripper's Guide, was Hearst's top syndicate man until the two had a falling out. Thrown out on his ear, Koenigsberg decided to show Hearst that his golden touch didn't depend on a connection to the newspaper kingpin. Koenigsberg created a new syndicate, Kay Features, and got together a small stable of features including Arnot's Don Key O.T. (others included Cuddles by Charles Forbell and the anonymously penned Dinah Says).

The new syndicate certainly didn't make much of a splash. Doubtless some papers passed on Koenigsberg's wares out of a fear of Hearst retribution, but frankly the quality of some features, like Arnot's, just wasn't up to snuff. Worse for the creators was that Koenigsberg lost interest in the syndicate basically as soon as he got it rolling -- he was at the same time formulating a plan to create a chain of one hundred papers with the owner of the Denver Post, a plan that went nowhere, but took up all his energy. Kay Features, meanwhile, withered on the vine.

Although Don Key O.T., along with most of the Kay Features stuff, was advertised in E&P from 1929 to 1933, I am now 99.9% certain that nothing was produced for Kay past a one year contract, and most if not all for less than that. It seems as if the reason the material was continually advertised is that Kay was soliciting the material to other hole-in-the-wall syndicates to rerun, which did happen in a limited way.

Don Key O.T., as disappointing as it was, seems to have been Kay's longest running feature. Though it was advertised to start in January 1929, the earliest it is found starting is February 4 1929*. The last paper I can find to print it in its original run is Harrisburg Evening News, which cancelled it on December 28 1929. 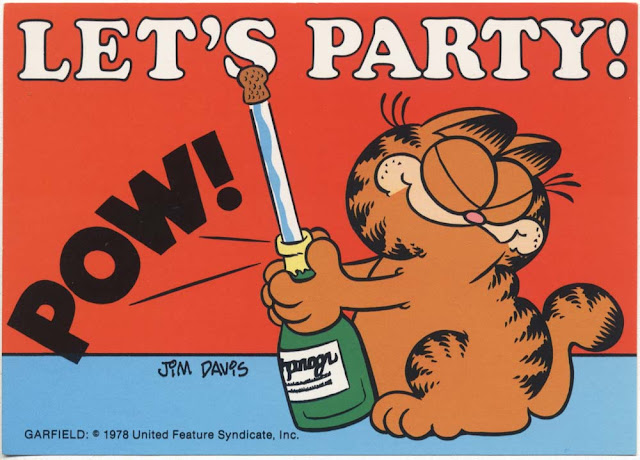 Though some of Argus' Garfield postcards are quite a hoot, this one is pretty meh. This card is coded P2090 on the back.

Comments:
Hello Allan-
If you mean by "MEH" that it's not by Mr. Davis, you're right. The semiskilled hack that did this can't do proper perspective, and has never seen (what I guess was his intention) a champagne bottle, a cork, (or is that supposed to be a tiny slice of toast?), motion lines, or the sound effect that attends such an opening.
I could be wrong,though. Maybe ol' Garf is rattling around a lucite towel bar in a ghastly colored bottle of "Tynogr", his eyes shut so he doesn't have to witness the violent fight that's just offstage.