Boxer George Memsic was, to be quite up front about it, a bit of a punching bag by 1910. In a long string of losses, only Frank Picato could be relied upon to kiss the mat for him. It's not that Picato was a bad fighter, though -- Memsic just seemed to have his number dialed in.

Memsic's next fight, scheduled for the 15th, is with Lew Powell, who has been on a tear. Tomorrow night Memsic will manage to fight him to a draw, but then in a pair of rematches will lose both times.

Obscurity of the Day: Adventures of the Silly Gallillies in Movie Land 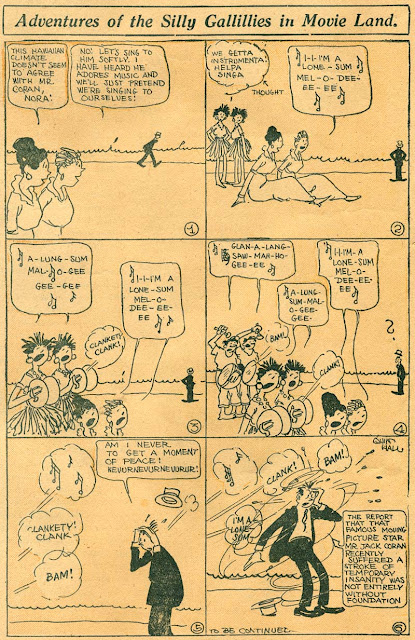 On December 20 1914, the Chicago Tribune's Sunday movie page added a new feature, a comc strip by Quin Hall called Adventures of the Silly Gallillies in Movie Land. The plot was about two teenage girls who are both in love with movie heartthrob Jack Coran. Their weekly adventures consist of them trying to meet and ensnare the poor unsuspecting actor.

After over a year in the pursuit, the girls finally succeed -- Nora (the blonde) turns out to be rich, and she uses her bankroll to legally adopt the clueless deamboat; Coran is willingly enslaved when he finds out that she will open a movie studio just for him, where he can play any part he pleases. The hunt having come to a close, the strip ended on February 13 1916, the day before Valentine's Day, of course.

Obscurity of the Day: It's Presidential Year

When Milton Caniff joined the Associated Press, his first comic strip series was no slam-bang action series, or even a bigfoot comedy series -- no, the AP thought he was just the guy to provide art to a closed-end series offering capsule biographies of politicians who might stage a run for President in the 1932 election.

Caniff had already cultivated a nice style while he worked at the Columbus Dispatch, but evidently he didn't think the AP wanted 'Caniff art' -- he took pains to produce for It's Presidential Year the most bland straight illustration art he could muster. It didn't look like Caniff, in fact it didn't look like anything except Generic Newspaper Illustration Art Level 101. Not that it wasn't professional grade -- it just wasn't exactly an impressive start for the someday-to-be comics legend.

There were a total of nine installments to the series, all sent out sometime in April 1932 to AP-subscribing papers. I've never found a paper that ran all nine -- those who did bother running any of them tended to offer only the frontrunners, or only those of the political bent preferred by the newspaper.  Not having ever found a definitive run, or even enough agreement to constitute a likely intended start date, The best that I can offer for running dates is that the series ran in April - May 1932.

Caniff himself had trouble remembering the series. In R.C. Harvey's biography, Caniff reminisces that it was a series of portraits, with only a few installments offering multiple panels (actually they all did). His only vivid recollection was that he was embarrassed by the job he did on the portraits of Roosevelt and Hoover (and Hoover did not appear as paert of this series, so he may be conflating several early assignments).

Comments:
Allan, this is quite a rare little find — Caniff's very early AP work. Quite amusing to see him trying to dumb down to please AP.

Hello Allan-
One paper did run the full series, the Warsaw (Ind.) Union from 3 to 14 May 1932. They are:
Franklin Delano Roosevelt
Albert Cabell Ritchie
Al Smith
Owen D. Young
John Nance Garner
Melvin A Traylor
Newton D. Baker
William H. Murray
James Hamilton Lewis
These were all Democratic contenders, Sitting president Hoover would naturally be the GOP's man.
It would seem these were issued just as the primaries were occuring, and timed so that most of these men had no more chance or relevence before the strip could be run, therefore, most papers never ran the entire set.
Over at AP they were using Caniff like, actually very much like R. J. Scott over at Central Press. these samples are rather unimaginatively copied from Scott's irregular man/topic in the news format strips, which were often issued in sets of six, sometimes more, as early as 1931. They also had Caniff doing just portraits, as he recalled(also like Scott), so AP could offer line art pictures with a longer shelf life for papers that preferred them to half tones. I have a great one he did of Hitler on the cover of a 1933 edition of The Hollywood Citizen. 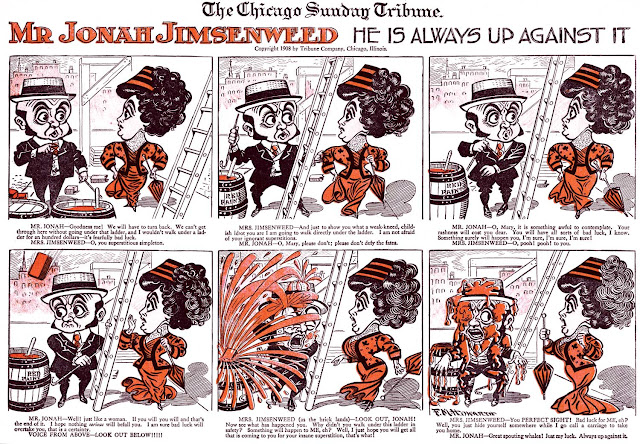 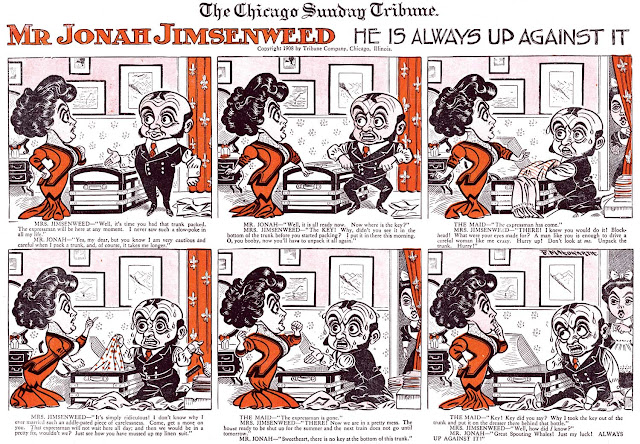 Mr. Jonah Jimsenweed was the swan song for one of the great pioneer newspaper cartoonists, F.M. Howarth. He died unexpectedly from pneumonia at the young age of 43, in September 1908.

This final series shows that Howarth was still at the height of his powers at the time, his bold and fascinating, yet creepy and repellant cartooning style shows no signs of flagging. The subject was one of his favorites, the never-ending battle between husband and wife. In this case the wife is a  harridan and the husband a weak-kneed schmuck. Pretty standard fare for Howarth, but executed as well as always.

Mr. Jonah Jimsenweed was created for the Chicago Tribune, where Howarth spent the final year or so of his career and life. The strip debuted on July 5 1908, and the material ran out on November 22, showing that Howarth had several months of material banked at the Trib prior to his death. Howarth's flagship Trib strip, Old Opie Dildock's Stories, was not as far ahead and that material ran out in September. 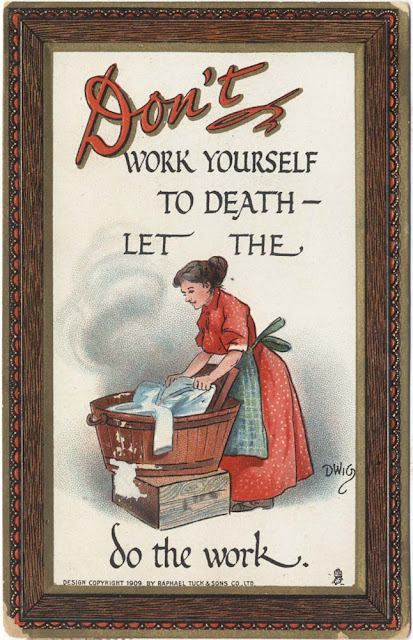 Here's a Dwig card from Tuck's Series #165 ("Knocks Witty and Wise"). I can't decide if the sentiment here is meant to be taken literally (as in the recipient is assumed to have a maid) or it is meant to be funny (as in, wouldn't it be great to have a maid). Today it would definitely be the latter, but in the 1900s, maids were surprisingly common in even middle class homes.

Comments:
I think it means "let the wife do the work." She's not dressed like a rich person's maid.

Hello Allan-
Yes, I believe Mr. Shetterly is right, it's probably a wife as the implied gag, but there were lots of servants that didn't wear formal uniforms, the middle class or farm families often had a "Hired Girl" that would assist in the household chores in those days before wide use of electricity and labor saving devices. My own Grandmother was hired out as a child of twelve (in 1910)to help a busy rural family. No special uniforms were called for. Drudgery need not be fancy.