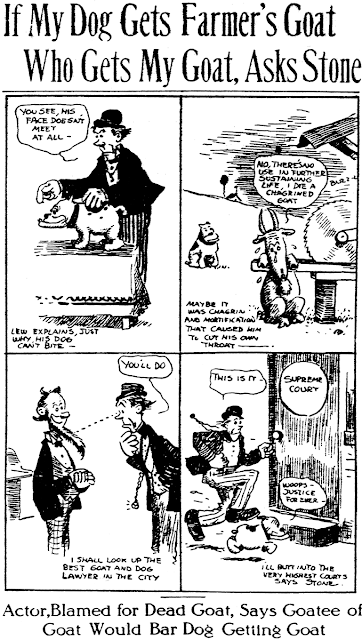 March 30 1910 -- A bizarre non-story with at best a tiny grain of truth behind it brings Herriman out of his semi-vacation period, in which his contributions to the paper disappear for days and weeks at a time.

Lewis S. Stone, appearing in a local play, owns a bulldog. Said bulldog is accused of having killed a goat. Maybe that much is actually true, though I wouldn't lay odds. But the story then goes on to discuss a supposed oral deformity of the bulldog, a death wish on the part of the goat, and a major court battle in the offing. This story is obviously playing for laughs, and that's fine, but the whole thing seems to be a shaggy dog (and goat) story from the git-go, which is generally frowned upon in the journalistic profession. But then again, we're talking about Hearst...

Just to be fair, I searched the other LA papers that are available online, and none of them reported on this story. 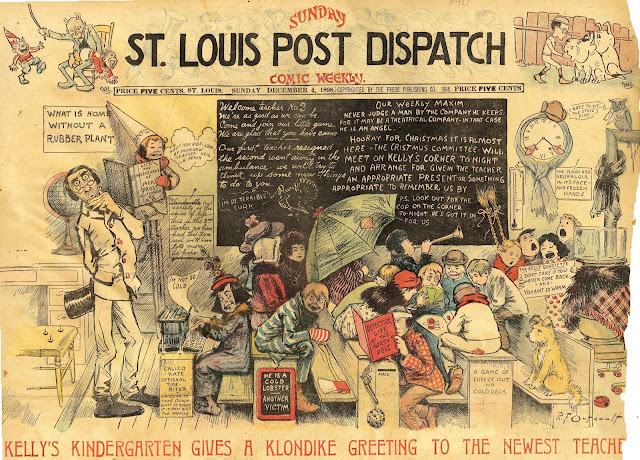 Teacher #3 looks like a real pushover to me. I predict a trip the emergency room is in his near future.

By the way, surely yesterday someone identified the masthead cartoons as the work of George B. Luks?

Comments:
Hello Allan-
The chilly reception the kids give their latest temporary teacher is characterized as a "Klondike greeting", because this was also the time of the Yukon gold rush. Klondike was a hot new word, or even a concept, and would be referenced constantly in popular media, quite a lot in comic sections, for instance. 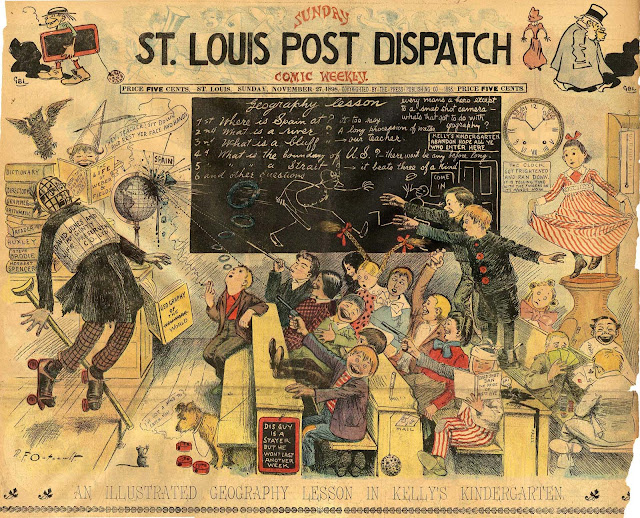 Notice those great little cartoons in the masthead, signed GBL? First person to identify the cartoonist gets 100 internet points.

I notice this is a few months after the Spanish-American War. That explains shooting the ink at Spain, and the question on the blackboard.

Active fighting with Spain had pretty much stopped with the complete crushing of the Spanish fleet and the capture of Cuba in July, but when this comic section was published,the war technically was still on, actually ending with the Treaty of Paris on 10 December.
During the spring and summer, there had been some amazing anti-Spain cartoons in this same space, like a raging monster matador surrounded by "bubbles" that had various Spanish atrocities depicted within, or a MacDougal cartoon of 13 year-old King Alphonso kicking Admiral Segasta down the cobbled streets of Madrid! 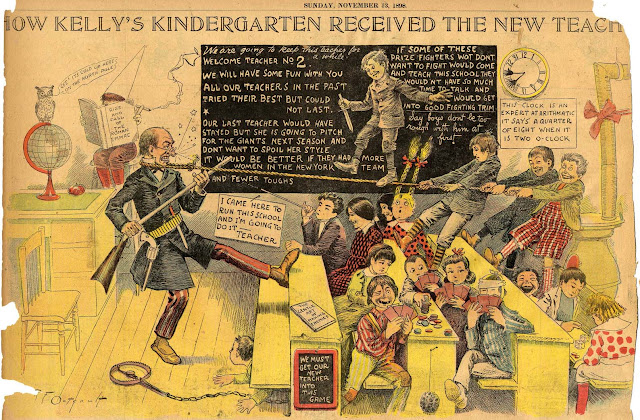 The new teacher has arrived, and he has smartly outfitted himself with a pistol and shotgun. Perhaps he will succeed in taming these wild animals. 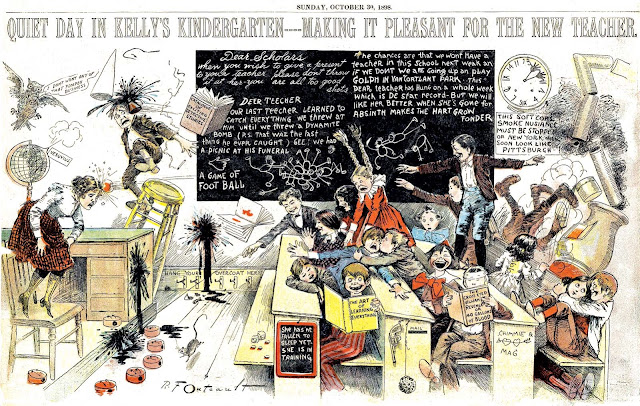 Teacher certainly didn't age well since last week, and who could blame her?

Kelly's Kindergarten was essentially a rehash of a series that Outcault had created for the Philadelphia Inquirer, called The Country School. Even a few of the characters are re-used, like the kid with the bandages on his head.

Comments:
This is pretty timeless. Just add some cell phones, laptops and a TV on the wall and you've got a 21st c.entury classroom (Maybe minus the coal fired stove)

Obscurity of a Fortnight or So: Kelly's Kindergarten 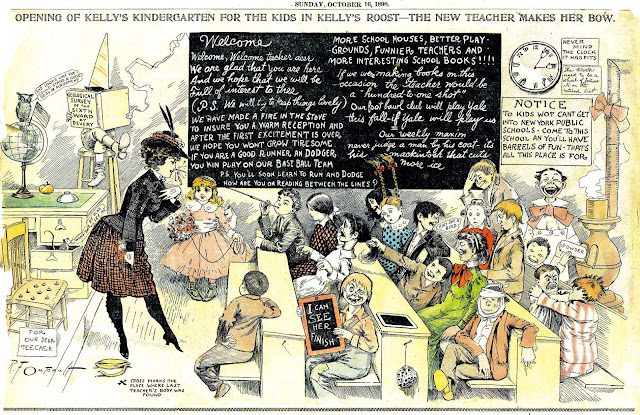 Pretty much anything R.F. Outcault produced is worth an extended look, even one of his more obscure series. With dozens of gags and bits of funny business shoehorned into each installment, Kelly's Kindergarten is definitely a series that rewards long and leisurely study. Luckily, Cole Johnson sent me a treasure trove of examples of this series, so we will depart in this case from our usual custom of running just a few samples. Over the next couple weeks we'll run Kelly's Kindergarten as a weekday feature of the blog.

Outcault's stardom began in the Sunday funnies of the New York World in 1895 with the Hogan's Alley pages, but as most any comics fan knows, not much more than a year later he was was lured away by Hearst. What is less well known is that Outcault continued bouncing around from paper to paper, ending up back at the New York World in the period 1898-1900. Kelly's Kindergarten was produced during this second act at the World.

The series brings Outcault back to the subject that brought him fame -- depicting the raucous lives of New York City tenement kids. The series began on October 16 1898 and was initially set in the classroom though that would eventually become too confining for Outcault. The first installment (above) introduces us to some of Outcault's new characters. He would add to the cast throughout the series, coming up with some truly bizarre ones along the way, like the kids whose faces spell out their names. There will also be a character who refers back to Outcault's original superstar.

Kelly's Kindergarten, later Kelly's Kids, would run until August 6 1899, and Cole has supplied us with the first and last episodes, and lots in between. So keep reading, and enjoy!

Comments:
Hello,
Thanks for the wonderful strips you have been publishing.
I read somewhere, I think Alfredo Castelli's Here We Are Again, that Oucault also had a strip entitled "Nonsense", do you know anything about it, any samples?
Marco

Marco --
Was not aware of this, but I checked Here We Are Again. Castelli mentions a panel called "A Nonsense Rhyme" running in September - December 1901 in the NY Herald by Outcault. He credits Bill Blackbeard's collection as his source for the info.

According to OSU's index of the Blackbeard NY Heralds, a panel by this name ran from September 15 to December 15 1901.

If anyone has a good quality scan of one of these, I'd love to see it.

Also a not-so-good run would be appreciated. I'd be happy to post it here: https://www.nonsenselit.org/comics/
Marco

Neat strip but just how old were kids in kindergarten in 1898?!

Thanks for sharing. Always a pleasure to read. 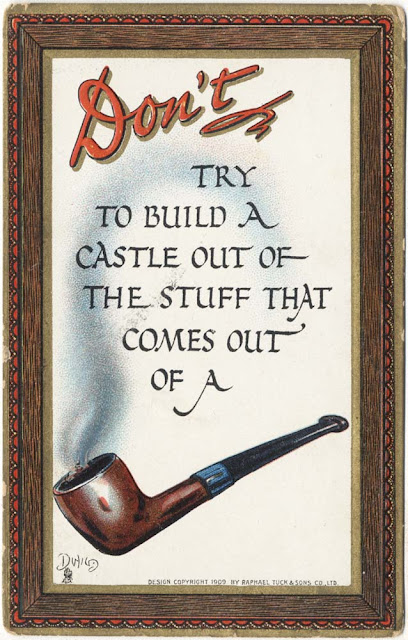 I'm guessing there is a saying about building castles out of ashes (or smoke?), but it's not a saying I'm familiar with, and a few attempts at prying it out of Mr. Google came back empty. Anyone?

Ah, I was thinking too hard, focusing on the castle. That makes perfect sense. Thanx, Allan