An old neighbourhood speed ordinance, long ignored, has now been revived. Trolley cars in certain Los Angeles neighbourhoods are now limited to speeds no greater than eight miles per hour. Commuters in good shape can keep up with the trolleys now if they keep a jaunty pace. 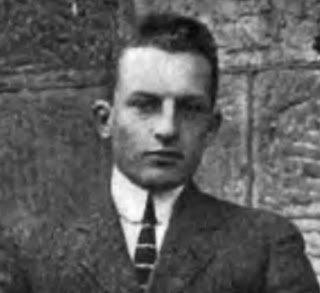 1912
Carl Francis Ludwig Zeisberg was born on September 25, 1891, in Lexington, Missouri, according to his World War II draft card and death certificate, which named his parents: Francis J. Zeisberg and Catherine Binder.
The 1900 U.S. Federal Census recorded Zeisberg, his parents, older brother and younger sister in Bristol, Tennessee, at 1131 Windson Avenue. His father was a German emigrant and music teacher. His mother’s name listed as Clara.
In the 1910 census the Zeiberg family resided on Valley Street in Abingdon, Virginia.
Zeriberg attended Hampden-Sydney College in Virginia. He contributed art to the school’s yearbook, The Kaleidoscope 1909 and 1911. He continued his education at the University of Virginia. Zeisberg drew around fifty illustrations for the 1912 yearbook, Corks and Curls. The Phi Gamma Delta, 1913, said he was a member of the Omicron Chapter.
Soon after graduation, Zeisberg got a job at the Baltimore Sun. About a year later he was a reporter at the Philadelphia Evening Ledger. For the Evening Ledger, Zeisberg drew The Geometric Kids from May 31 to June 12, 1915. The writer was Collins. For about two month in 1916, Zeisberg filed reports on the First Brigade of Philadelphia (composed of the First, Second and Third Regiments) as it traveled south to Texas. 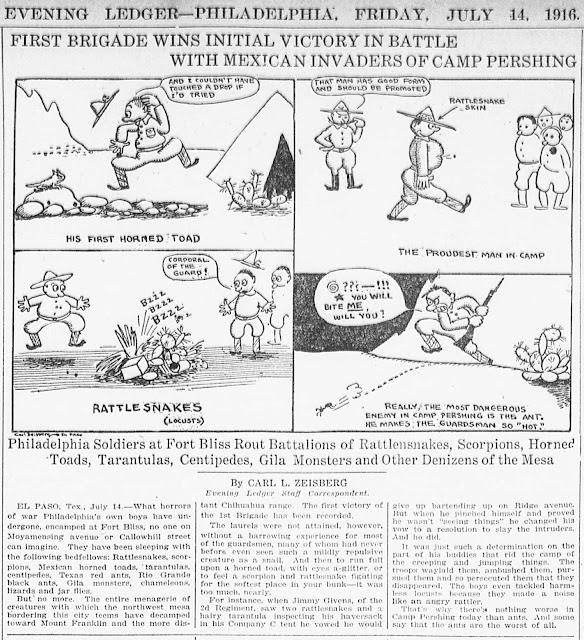 Evening Ledger 7/14/1916
On June 5, 1917, Zeisberg signed his World War I draft card. An Army Transport Service List, at Ancestry.com, said he was a private in Company “F”, 316th Infantry, which departed from Hoboken, New Jersey on July 9, 1918. In late May 1919, Zeisberg was headed home. The Evening Ledger published excerpts from Zeisberg’s diary on May 30, 1919; May 31; June 2; June 3; and June 4.
Editor & Publisher, August 21, 1919, said Zeisberg joined the editorial staff of the Philadelphia Evening Bulletin.
The 1920 census said newspaper writer Zeisberg was a Philadelphia resident at 119 South 52nd Street. After the census enumeration, Zeisberg married Frances C. Mitchell in Philadelphia.
Zeisberg did the cover of The Virginia Reel, May 15, 1920. He also contributed articles to magazines such as the Atlantic Monthly.
According to the 1930 census , the Zeisbergs lived in Cheltenham, Pennsylvania at 305 Paxson Avenue. Zeisberg’s occupation was newspaper cartoonist.
An entry in the Directory of the Living Alumni of the University of Virginia, 1931, Volume 423, said Zeisberg was the class of 1913.

Zeisberg was a table tennis enthusiast who became president to the United States Table Tennis Association in the 1934–1935 season. His remarkable and controversial role in table tennis is explored in great detail at Team USA, USA Table Tennis.
The 1940 census said Zeisberg was an assistant city editor. He and his wife lived at 430 Sylvania Avenue in Abington, Pennsylvania.
Zeisberg passed away on June 7, 1950, in Philadelphia. An obituary appeared in the Baltimore Evening Sun, June 8, 1950.

Carl F. L. Zeisberg, 58, former Baltimore newspaper man and an editorial staff member of the Evening Bulletin, died of a heart attack late yesterday in Pennsylvania Hospital. A native of Missouri, Mr. Zeisburg attended the University of Virginia, where he contributed to undergraduate and alumni publications then and later have become a university tradition.
On Sun Staff in 1913
He began his newspaper career with the Baltimore Sun in 1913 and a year later worked for the Evening Ledger here before serving with the Army in World War I. He joined the Bulletin staff in 1919. Mr. Zeisberg served on the Bulletin at various times as a rewriteman, copy reader, picture and city editor. An authority on table tennis, he contributed an article on the subject to the Encyclopedia Britannica. He made his home at Ambler. His wife, Mrs. Frances M, Zeisberg, survives.

Zeisberg was laid to rest at Holy Sepulchre Cemetery.

Obscurity of the Day: The Geometric Kids

If Flatland had comic strips in their newspapers, The Geometric Kids might have been quite popular. Unfortunately for artist Carl Zeisberg and writer "Collins", their strip ran in the Philadelphia Evening Ledger, with an audience firmly entrenched in the third dimension. The novelty of a comic strip about characters made up only of circles, rectangles and lines wore out pretty darn quickly, and sputtered out after a mere two weeks. Birth, May 31 1915, unmourned death, June 12.

Zeisberg had one other series published in the Evening Ledger which lasted a bit longer, but otherwise he never made any impact I know of as a cartoonist. "Collins", the one-named writer, is unknown to me.

Comments:
Hello Allan-
Would this be considered a local, one paper series? The Ledger Syndicate would appear to begin about 1919 with Somebody's Stenog finding it's way into several papers, but the Evening Public Ledger had cartoons like this one before that.

As far as I know these early Ledger strips never appeared anywhere else. --Allan

Obscurity of the Day: Dear Dad and his Daughter

When Winsor McCay defected to Hearst, his new duties included penning weekday strips in addition to his Sunday In the Land of Wonderful Dreams and editorial cartoons (not to mention moonlighting with animation). Perhaps due to overwork, the weekday strips tended to be, for McCay at least, relatively simple productions graphically.

Dear Dad and His Daughter, also known as He Meant Well and (as can be seen above) episode-specific titles, ran from November 28 to December 27 1912, making it one of McCay's shorter-lived weekday strips. It concerns a father who constantly puts his foot in his mouth around daughter's beaus. Does he do it intentionally to chase them off, or is he just clueless? You be the judge. 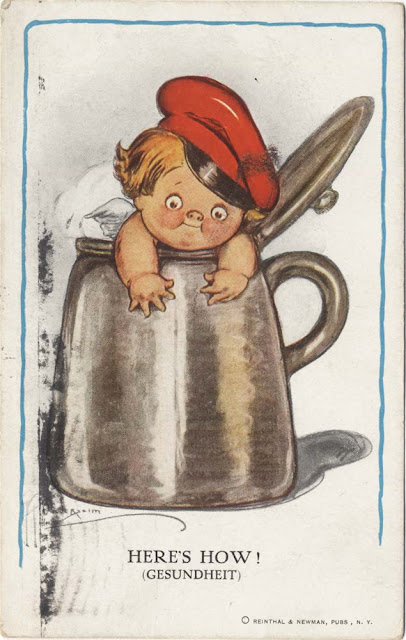 A Reinthal & Newman card (coded #174) drawn by Grace Drayton under her married name of Weiderseim. Okay, so the cherub is supposed to be German, based on the cap and the beer stein. "Gesundheit" is German. But what does that have to do with the kid in the stein? What's the gag here?

Comments:
A toast, as well as a blessing for a sneeze.