Woodson Messick Cowan was born on November 1, 1886, in Algona, Iowa, according to his birth certificate, at Ancestry.com, and Who’s Who in American Art, 1976. His parents were James and Rachel Cowan. Cowan was also known as Wood and Woody.
In the 1888 Iowa state census, Cowan was a year old and the youngest of four siblings. The family of six lived in Algona.
The 1900 U.S. Federal Census recorded Cowan, his parents and two older siblings in Algona. His father was a brick layer. The 1905 Iowa state census said the Cowan family were still Algona residents.
Cowan described his early life and career in the Arizona Republican (Phoenix, Arizona), April 10, 1920.

One day a rash reporter asked Woodie Cowan, the cartoonist and sports writer, to tell him the, story of his life. No more was necessary.
“I’m glad you asked me, old thing,” said the obliging Woodie. “I’ll start at the very beginning and spare neither time nor imagination to make it interesting. To begin with I, was born on Friday at 3:17 a. m. My full name is Woodson Messick Cowan, which you will admit is so full that it staggers. I was a howling, success for six months and then became a democrat. As late as two years I objected to kissing, but I soon learned better. At three, having attained self-consciousness, I turned republican. I showed a fondness for bread and jam in 1896, was dumb at school, but struggled hard and became a bricklayer at 15.
“Work was not in my line, however, so I entered the Chicago Art institute in 1908, where I learned to exist on $2.50 a week. I turned waiter and later sang in cabarets and movies. Then I became proficient in art, and 30 cents sufficed me for a week.
“I first did cartoons for the Chicago Inter-Ocean which is now no more.The rumor that my art was responsible for its demise is false, however. Then I went to the New Orleans Item where I did a humorous column, a court sketch, and a cartoon every day, and slept the other hour. The war found me with the Washington Times. https://chroniclingamerica.loc.gov/lccn/sn84026749/1914-06-27/ed-1/seq-13/#date1=1777&index=2&date2=1963&searchType=advanced&language=&sequence=0&lccn=sn84026749&words=COWAN+WOOD&proxdistance=5&state=&rows=20&ortext=&proxtext=&phrasetext=wood+cowan&andtext=&dateFilterType=yearRange&page=1 At the opening of the 1916 shearing season, I plunged into Wall street, and am still trying to get even. I am now doing cartoons, comic strips, and articles on sport subjects with a New York syndicate. …

Local Drawer Debuts.
New Orleans, Dec. 17.
Wood Cowan, local cartoonist, made his stage debut at the Orpheum Monday. He sings while sketching conventional characters in the conventional way. His act lacks coherency evidencing hasty production. It is hardly pretentious enough for the better grade of vaudeville. Cowan is of the staff of the New Orleans Item.

Wood Cowan, reporter and cartoonist, who broke into the game on the Journal and afterwards served on the Inter-Ocean and joined Jim Crown’s stellar aggregation down in New Orleans, is doing the heavy cartoon work for the New York Tribune. The Chicago Tribune reproduced one of his cartoons on its editorial page the other day.

“Newfangles” Artist Is a Genuine Ruralist
Wood Cowan, who draws “The Newfangles”
Truly rural ... but with a New York accent ...  is Wood Cowan, who draws “The Newfangles.” He lives at the end of the end of the trail ... somewhere in Connecticut ... in an old farmhouse, with oak beams and a flagstone walk. In cold weather, though he becomes a city feller, and moves to a studio apartment in New York. Cowan has a reputation for being one of the finest tellers of tall yarns on the Eastern seaboard ... strong men weep when they hear his imitations of nutmeg Yankees. At 15 he had learned the rudiments of bricklaying ... and three years later entered the Chicago Art Institute. Been a cartoonist ever since. He’s happily married ... has one youngster ... is proud of his home-made wines ... and disapproves of spats ... but wears them. 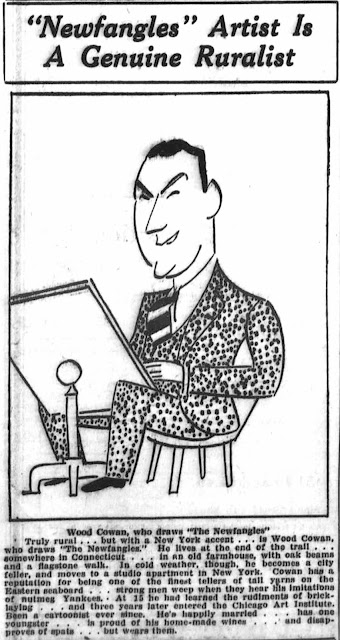 In 1929, there was a contest to name Mom ’n’ Pop’s cat. A photograph of the winner appeared in the Bismarck Tribune (North Dakota), April 30, 1929.
The Waterbury Democrat, August 23, 1933, published the syndicated column “In New York” which included the following anecdote. 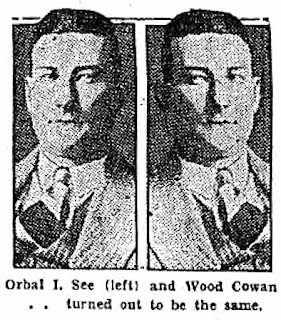 O. I. See
One fine old name not in the directory any longer is that of Orbal I. See. Mr. See, who is really Wood Cowan, the comic artist who draws “The Newfangles,” has moved to Connecticut. Some years ago, though, he went into the phone company’s office to apply for service in his town apartment.
“What is your name?” asked a clerk.
“What did you say?” asked the artist.
“I said I must have your name,” replied the clerk, a little impatiently.
“Oh, I see,” drawled Cowan.
“And your first name Mr. See?” Inquired the clerk, busily scribbling on a card.
This so amused the applicant that he invented as name on the spot. “Orbal,” he said. And Orbal I. See it was, through four issues of the directory. His friends had heard the story, so they had no difficulty remembering his nom de telephone.

Cowan’s work appeared in comics books from the late 1930s to mid-1940s.
According to the 1940 census, Cowan, his wife and two sons were Weston, Connecticut residents. His house was valued at $50,000 and he earned $5,000 in 1939.
On April 27, 1942, Cowan signed his World War II draft card. He lived in Weston–Westport, Connecticut. His employer was the Press Alliance in New York City. His description was five feet nine inches, 180 pounds, with brown hair and eyes.
Cowan was involved with over a dozen comic series including In Our Office, Sissy, and American Heroes, here and here.
Cowan was mentioned in Life magazine, August 8, 1949.

... The Westport Artists Club, which was formed only four years ago, already has 148 members. The club’s president: Wood Cowan, who once drew the newspaper cartoon Our Boarding House (Major Hoople) and is now semi-retired.

Wood Cowan, 90, Dies; Cartoonist, Ex-Official
Weston—Woodson Cowan, 90, of Godfrey road, a former First Selectman here and a nationally recognized professional cartoonist best known for “Major Hoople,” died Friday in Norwalk hospital.
Mr. Cowan drew “Major Hoople” from 1931 until his retirement in 1956. He also drew political cartoons for the Bridgeport Post-Telegram and the New Haven Register, as well as newspapers in New Orleans, New York and Philadelphia.
He was co-author and illustrator of “Famous Figures of the West,” and the author of “Iowa Cracker Barrel.”
Mr. Cowan was born in Algona, Iowa, the son of a pioneer homesteader in that state, where he lived in a sod hut on the Iowa prairie during his first two years. He came to Weston in 1927 and resided here the rest of his life.
He was the town’s First Selectman foam 1955 to 1957 when a dispute with the Republican town committee led to his retirement from politics. Previously, he had also been elected to three terms in the State House of Representatives on the Republican ticket.
During his tenure as First Selectman, Weston obtained its first post office, its first state trooper and the first town fire department, accomplishments Mr. Cowan pointed to with special pride at an Historical society meeting in October 1974.
But the cartoonist’s chief claim to fame was his “Major Hoople,” the fat major who is the chief character in “Our Boarding House,” which still appears in Bridgeport Telegram and Sunday Post.
“When I drew him,” Mr. Cowan said in a 1974 Bridgeport Sunday Post interview, “Major Hoople would do the most outrageous things, but always with a reason. Like crossing a lightning bug with a bed bug so he could read in bed at night.”
Survivors are his wife, Mrs. Frances Cowan; two sons, Thaddeus Cowan [1934–2012] of Manhattan, Kan., and Conrad Cowan [1931– ] of Santa Monica, Calif.; and five grandchildren.
Memorial services will take place Tuesday at 3 p.m. in the Norfield Congregational church, with the Rev. Evelyn Towle officiating. Burial will be private.
The Lewis funeral home, 210 Post road east, Westport, is in charge of arrangements.