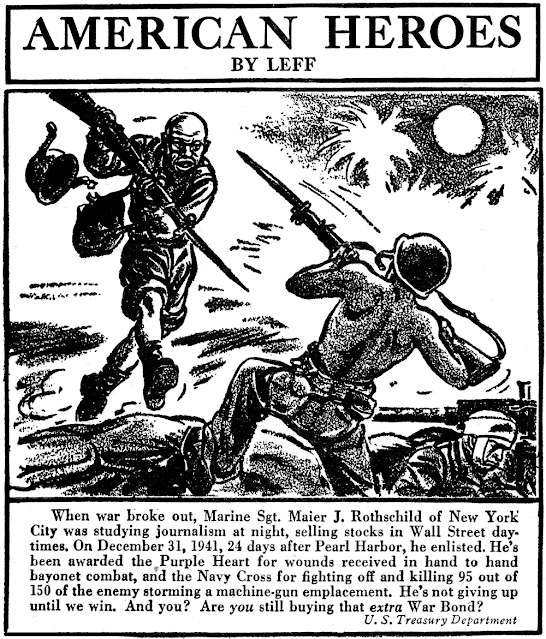 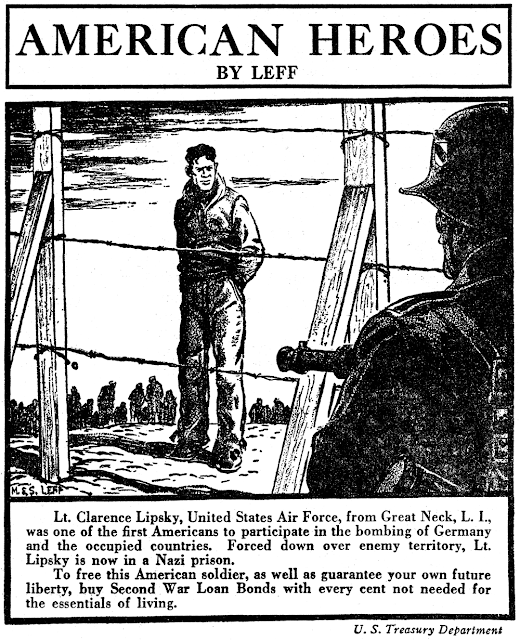 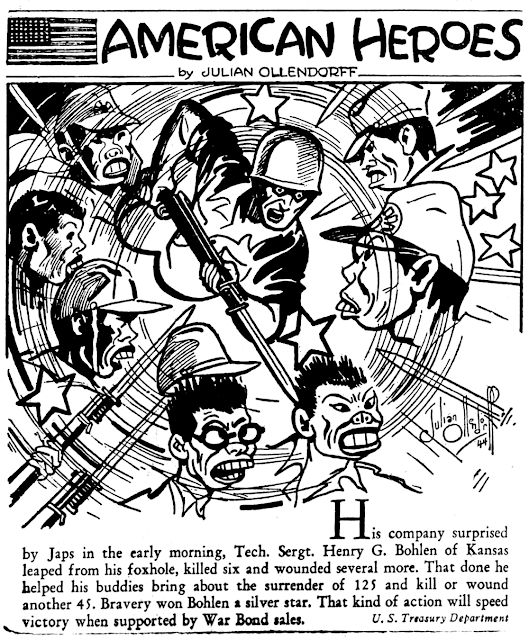 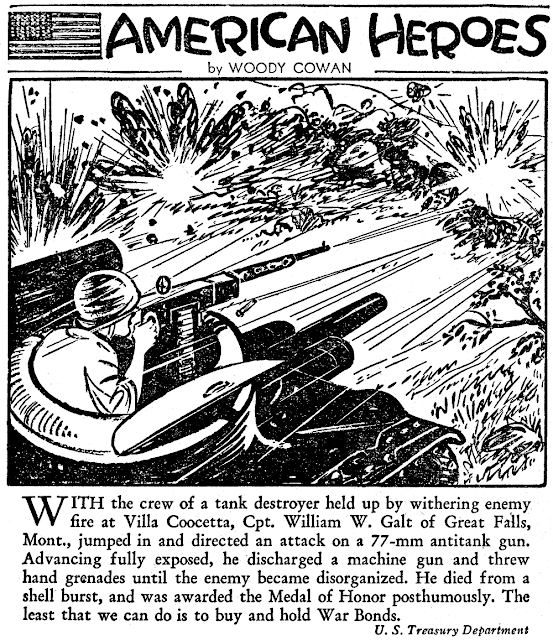 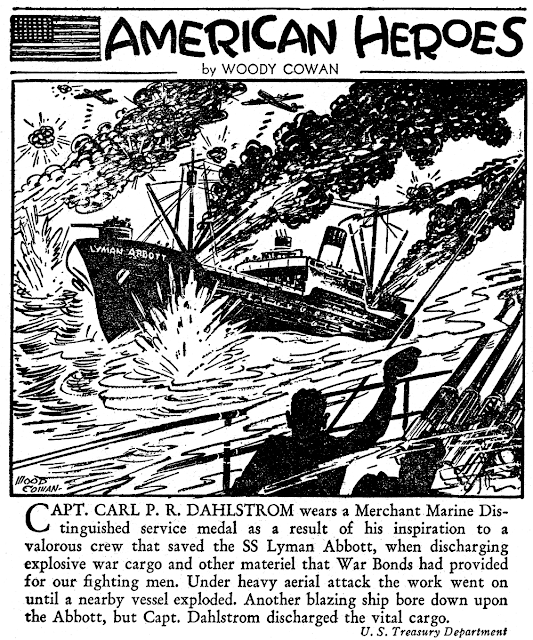 The US Treasury Department, tasked with the relatively easy job of selling War Bonds during World War II, nevertheless wasn't above the hard sell to squeeze the last few dollars they could out of the wallets of those not in uniform.

The panel cartoon series American Heroes offered tales of heroism from the warfronts, always with a stinger about the need to buy War Bonds. The panels were presumably sent out in batches, and newspapers were free to use them as they wished, whether on a regular basis or to fill holes whenever needed.

The first batch went out in February 1943, and were bylined "by Leff." In my book I mistakenly assigned these to Mo Leff, but later I looked at the microscopic signatures that were inscribed on a few panels (most were unsigned) and see that it actually says "M & S LEFF", indicating that the brothers Mo and Sam both worked on the series, presumably with Mo pencilling and Sam inking.

The Leffs were responsible for most of the series, but with the batch that went out in November 1944, the new artist was Julian Ollendorff, who offered up the most hell-raising illustrations for the series (see above), showing that at 60-some years old he still had some lively ink left in his pen.

He didn't last long though, as the batch sent out in April 1945 switched to veteran cartoonist Wood (or Woody) Cowan. The batch by Cowan was the last batch sent out, as the war was soon over, though War Bonds did continue to be sold for awhile after the end of the conflict. Although newspapers continued running the panels well into 1946, I'm pretty confident that Cowan only produced a single lot of them.

I presume the series was weekly, but I confess I haven't beaten the bushes to figure out exactly how many panels were actually produced. There may not have been enough offered for that frequency. If someone wants to put in the work to figure that out, you'll find plenty of papers running them in online archives.

On a side note, I was able to verify the stories of the men cited in all the panels above except that of Henry G. Bohlen. No one by that name seems to have won a Silver Star, and I find no trace of the name in wartime newspaper accounts. Did Ollendorff make up a hero from whole cloth?

Comments:
I've got a decided oddity for you. There *wass* a Henry G. Bohlen, he *was* from Kansas, and he *was* a decorated soldier...but not in the Pacific!

https://www.honorstates.org/index.php?id=44700 shows that he was indeed a Technical Sergeant from Osborne Co., Kansas with the 90th Infantry Division, 357th Infantry Regiment, and he won a *Bronze Star* (not Silver Star), and he was killed in action on July 6, 1944. He's buried in the cemetery at Colleville-sur-Mer, in France.

I have no explanation for this. It could have been something badly garbled, or it could be, shameful to say, an outright lie.

A statement in the Bohlen item was eyebrow-raising: he and his buddies killed or wounded 45 Japanese, and got 145 to surrender? That doesn't sound right.

It only sounds wrong because you don't know the name he went by in the service -- Sgt. Fury. And if anyone could have engaged the Japanese in Europe, it would be him.

Now that I read Wilbur's comment, I readily see his point; very few IJA soldiers surrendered in combat, and 145 surrendering in one battle would have been an extraordinary number, indeed, and likely trumpeted loudly. So, yes, I agree with Wilbur, that should be a red flag.