Obscurity of the Day: Sambo Remo Rastus Brown is Now a Policeman 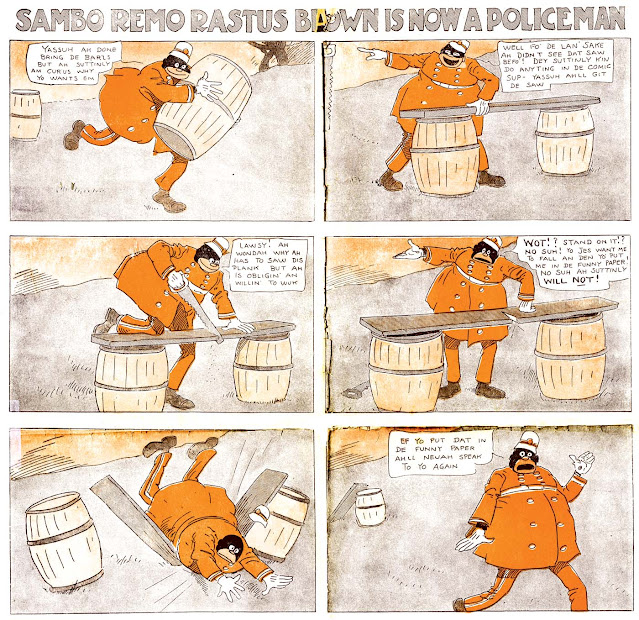 Today Clare Briggs is mostly remembered, by those who remember him at all, for his daily series with running titles like When a Feller Needs a Friend, The Days of Real Sport, and Somebody's Always Taking the Joys Out of Life. What is seldom recalled is that in his days at the Chicago Tribune he created a long-running and popular Sunday series titled Danny Dreamer. That was a strip about a kid who's imagination was compared in each episode with considerably different reality.

After about four years milking that plot, Briggs tired of it and shifted the focus to Danny's father, who luckily enough also turned out to have a vivid imagination. Shortly after making that switch, though, Briggs seems to have realized that Senior was too generic of a character for the comics section, so he gave him a wacky black sidekick to liven things up, and dropped the reality vs. imagination schtick in favour of physical comedy with the inevitable racial overtones.

That sidekick was Sambo Remo Rastus Brown, and he came completely equipped with all the hoary black stereotypes typical of the era. Brown's role in Danny Sr.'s life is never fleshed out, but he seems to live with the Dreamer family, so perhaps he was what was then called a "hired man", sort of the male version of a maid, tasked with all manner of male-oriented work around the house.

After almost a year of Dreamer Sr. and Brown sharing the spotlight, Briggs decided that Sambo Remo was the only real draw and so he put the whole Dreamer family out to pasture. Since the new star needed to go out on his own, Briggs decided it would be hilarious to have a black man as a policeman. Not that black policemen were totally unknown in this era, but it can be safely assumed that their patrols were generally limited only to black neighborhoods.

In the new series, with the unwieldy title of Sambo Remo Rastus Brown is Now a Policeman, much of the comedy would come from Sambo Remo interacting with white folk who don't take well to him being a figure of authority. Since you can easily imagine how those gags went, I've decided to instead include the above superb fourth-wall breaking strip that is not at all typical fare for the series.

Sambo Remo Rastus Brown is Now a Policeman, which I count as a separate series though it has family ties to Danny Dreamer, ran from October 13 1912 to February 23 1913.

A minor mystery about this series: for some reason Briggs never signed the strip once it gained this new title. It certainly appears to be his work, so I don't know why there would have been such an abrupt change.