Obscurity of the Day: Look Out for the Jinx 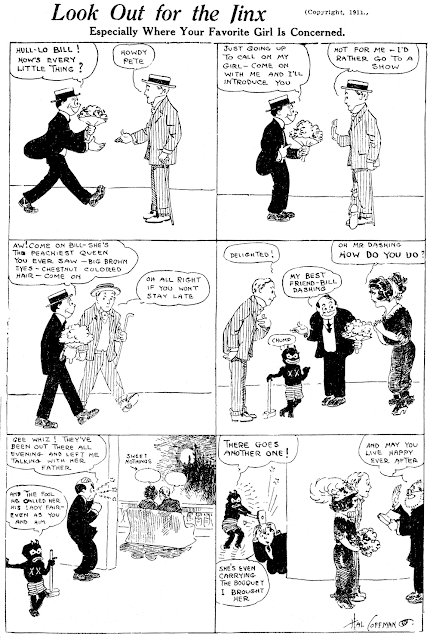 Hal Coffman put most of his efforts at Hearst into producing editorial cartoons for the Arthur Brisbane editorials, but he was also sometimes tapped early on to contribute a strip here and there.

In the case of Look Out for the Jinx, though, it appears not to have run in the Hearst flagship papers, and so was not caught by my Hearst indexers who worked off of the New York American and Journal. For some reason I can only find this strip running in the Washington Evening Star, not part of the Hearst chain, where it appeared sporadically from June to September 1911. It was definitely syndicated by Hearst, though, as a few examples show a copyright to National News Association, one of the many Hearst sub-companies.

The strip is good fun. A little imp called The Jinx is the personification of trouble, and he causes, or at least appears as an eyewitness, to all sorts of bad outcomes. The only problem with the strip is that it is basically a rehash of Jonah, A Whale for Trouble, which Frank King penned a year before for the Chicago Tribune.

Comments:
In the same vein as "Joys And Glooms."