Obscurity of the Day: Kisses 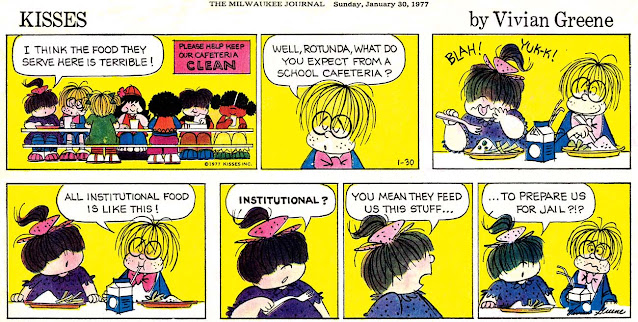 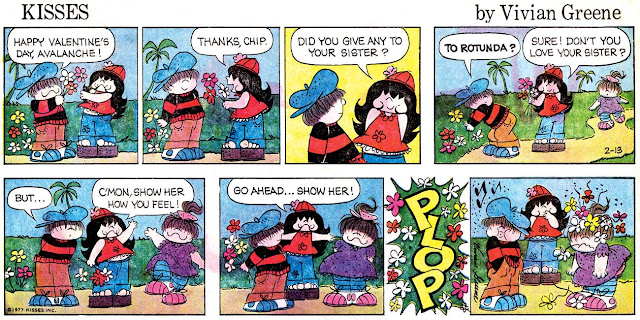 Yesterday we ran a 1976 Editor & Publisher article about the comic strip Kisses and its creator, Vivian Greene, so let's extend our coverage with a history of the strip.

Greene says that around 1971 she was signed to a development contract with a major New York syndicate  to create a Kisses-like strip. Greene wanted to create a strip that would appeal to kids, and though she was not herself a cartoonist, she wrote the material and worked with anonymous artist collaborators. Just shy of launching with a healthy list of clients the syndicate went bankrupt. I don't know what syndicate this might have been, Bell-McClure? Or maybe Newsday Specials?

Greene made lemonade out of those lemons and adapted her ideas to greeting cards. Selling them herself to distributors, she soon had a multi-million dollar business going. But that comic strip bug just wouldn't leave her alone, and she started shopping Kisses around once more.

In 1974, the Register & Tribune Syndicate listed her strip in the E&P Syndicate Directory, but it turns out nothing ever actually became of that. In 1975, a few newspaper articles claimed that her strip would soon be syndicated by the Chicago Tribune-New York News Syndicate. Never happened. What did actually happen was that John Dille's National Newspaper Syndicate picked up the strip and it debuted on May 4 1975*.

In contemporary interviews Greene seemed happy with the syndication of her strip, and she should have been as the strip might not have been putting up huge numbers of clients, but it did have some quite high-paying ones. But unfortunately it would not last long. In early 1976 NNS was in the process of shutting down, and Greene says they sold off her contract to United Feature Syndicate without her input. Specific reasons are unknown, but Greene was unhappy with the arrangement. United got their syndicate stamp on Kisses for a very short time, from February 9 to March 20**.

From then on Greene self-syndicated, handled the business end of the strip as well. For such an accomplished self-promoter, she was well-suited to this task. I say that notwithstanding the downright creepy marketing promotion discussed in the E&P article run here yesterday! However, a self-syndicated comic strip is rarely a well-paying proposition, and by 1979, evidently the businesswoman saw that her time was more profitably spent elsewhere. Kisses ended on December 29 1979***.

PS: Greene's reminiscences would make for an interesting article, but after a very promising start to an email correspondence, she inexplicably disappeared. Ms. Greene, if you're out there and want to talk about the Kisses strip, I'd love to hear from you!

Comments:
She has a blog that she keeps up. She does say that she "is still selling Kisses". Also books, cards, speeches, memes, etc.