Obscurity of the Day: Snapshot Bill 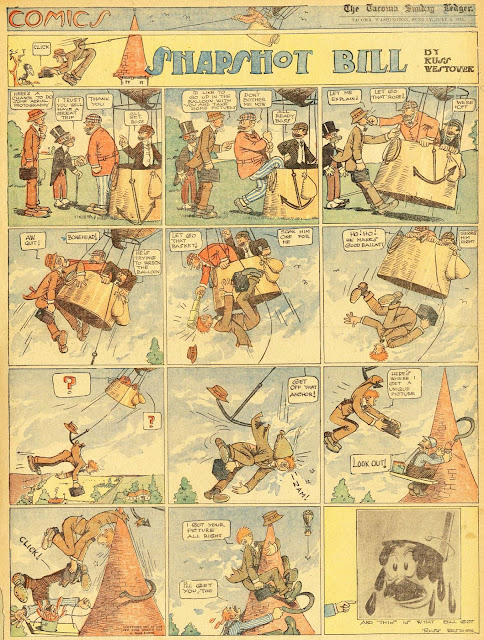 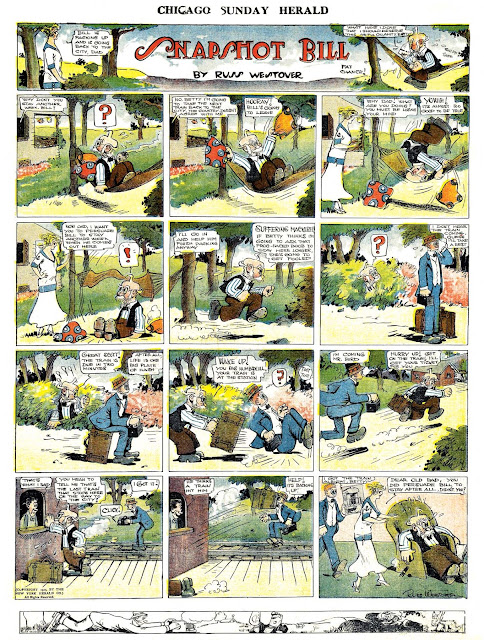 Between Russ Westover's inglorious early days as a Bud Fisher copyist at the San Francisco Chronicle and his mature work as the creator of Tillie the Toiler, much of his output was for the the New York Herald. One of his Sunday features was Snapshot Bill, a strip about a camera bug.

Cameras had become ubiquitous among the middle class with the debut of the Kodak Brownie camera in 1900, and the fiend who would go to crazy lengths to get a great photo had already become a comedy staple by 1914 when Snapshot Bill debuted on April 19*. Westover's bit of ingenuity was to put his hapless hero through the wringer in the quest for a photo, and then show the resulting bad photo as the punch line. The 'photos' were merely gray wash drawings, sometimes more or less convincing as photographic simulations. I can't help wondering if Westover would have had a real hit on his hands if he had connived to stage actual photographs as the climax of his strips; but that's just me Monday morning quarterbacking.

Westover seemed to tire of the Bill character who in later years was sometimes incidental to his own strip; the strips became increasingly about his girlfriend's irascible papa, and even the photographic denouements were sometimes pointless or dispensed with altogether. Papa's appearance and schtick was almost identical to Pa Perkins of Polly and her Pals, showing that Westover had not yet tired of being a me-too cartoonist.

The strip was well enough received to have what in the 1910s would be considered a very long run. It ran for just short of four years, ending on March 10 1918*. You can read more Snapshot Bill samples over at Barnacle Press.

Comments:
Hello Allan-
It's an interesting miniifad for a few weeks at the Herald at that time that had a giant full page figure be part of the strip, at least I remember others, Pinheadus of "Great Cæsar's Ghost", f'rinstance.
Westover might have stuck with the "much effort to get punk pic" theme, but it really is a limiting, one-note gag.Perhaps ditching it might make sense, but instead of say, making Bill into a newspaper photog story, he went after that blatant Polly & Her Pals clone.
I always wondered why he'd even want to do such an obvious phony like that. Maybe the Herald saw how hot Polly was, and decided they could have their own. But it's right up there with "Dem Boys" as among the most flagrant fake funnies.
Though named Snapshot Bill, it had Bill in it less and less as I recall. At it's termination, was the series just the fake Polly characters?

Bill was in it to the end; you can find a 1918 episode on the Barnacle Press site. But he still acted more like a walk on guest spot rather than the star of the show.