Arthur Lowell Talbott was born on September 26, 1907, in French Creek, West Virginia, according to his World War II draft card. His parents were Elliott L. Talbott and Minnie Merle Colerider who married in 1906.
The 1910 United States Census said they resided in Glade, West Virginia. Talbott’s father was a barber.
On September 12, 1918, Talbott’s father signed his World War I draft card. He was a Texas ranger who lived in Big Wells, Texas. Apparently he was divorced.
The 1920 census said Talbott’s mother remarried to Arthur N. Smith, a farmer born in Nebraska. Also in household was Talbott’s younger brother, Stanley, a step-sister, and servant. They lived in Meade, West Virginia.
According to the 1930 census the family had grown to eight members plus a servant. They were residents of Omaha, Nebraska at 1031 35th Avenue. Talbott was unemployed.
The Republican (Oakland, Maryland), June 4, 1931, published marriage license notices for several couples including “Arthur Lowell Talbott, 23, school teacher, France [sic] Creek, W. Va., and Garnet Ellen Simons, 21, Abbott, W. Va.” Additional information about their marriage has not been found.
Talbott had an entry in the Catalog of Copyright Entries, Part 3, Musical Compositions, New Series, 1934, Volume 29, Number 4.

The 1940 census said Talbott was a self-employed commercial artist. He lived with his parents and three step-sisters in French Creek, West Virginia. They were at the same location in 1935.
Information about Talbott’s art training has not been found. He produced three series in 1936 and 1937: See For Yourself—In West Virginia; West Virginia Hall of Fame (with Fortney); and West Virginia Walton aka Gary O’Neil in West Virginia (with Byers). They appeared in the Martinsburg News where Talbott was a staff artist. The identities and background of his collaborators, Fortney and Byers, remain a mystery.
On October 16, 1940, Talbott signed his World War II draft card. His description was five feet five inches, 145 pounds, with blue eyes and blonde hair. Talbott’s Department of Veterans Affairs BIRLS Death File, at Ancestry.com, said he served briefly with the Merchant Marine from February 20, 1945 to April 16, 1945, and April 30, 1945 to July 5, 1945. 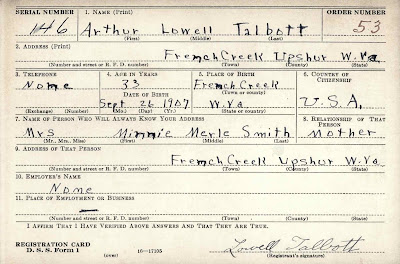 At some point Talbott moved to Florida where he married Lois Mildred Yancey on April 3, 1946.
The 1950 census said Talbott had two sons and two daughters. They were Sarasota, Florida residents at 412 45th Street. Talbott painted newly constructed houses. His wife was a curb girl at a snack bar. The 1953 and 1955 Sarasota city directories listed Talbott as a painter who lived at 313 39th Street.
Some years later Talbott returned to West Virginia and wrote a weekly column for the Beckley Post-Herald. The Congressional Record of the Senate, September 21, 1965, reprinted his piece “White Sulphur Springs—Nation’s Oldest Resort”. Some of Talbott’s writings were mentioned in West Virginia History, Volume 30, 1968.
Talbott passed away on March 13, 1993. The Social Security Death Index said his last residence was Buckhannon, West Virginia. He was laid to rest at the French Creek Presbyterian Church Cemetery.