Obscurities of the Day: A Trio From Martinsburg, West Virginia

Small weekly newspapers seldom run cartoon or comic strips produced in-house, but they're not such a tremendous rarity that I'd call it "Man Bites Dog" level news when I find one. But when I find THREE in the same paper, and all by the same creator, that's probably a once in a lifetime occurrence. And so I did in the Martinsburg (WV) News, a weekly that was published from 1934 to 1983.

In my occasional riffling through eBay newspaper listings, where I sniff around for smalltown papers that might have something odd or unusual lurking in them, I came upon a listing for two 1937 copies of the Martinsburg News. The listing photos showed, among other things, an interior page from one that included some sort of comic strip, though the resolution wasn't good enough to tell exactly what I was looking at. The price was cheap, though, so I sprang for them.

To my delight, when I received the papers I found that there wasn't just one comic strip, but also another comic strip and a panel feature in each paper! They were all by a fellow named Lowell Talbott who was on staff at the News. I know practically nothing about this fellow except that he was a surprisingly good cartoonist/illustrator, apparently had boundless energy, and he really, really loved West Virginia. (But Alex Jay, a better sleuth than me, will be weighing in on the 19th with an Ink-Slinger Profile).

Unfortunately, the Martinsburg News is not a digitized newspaper and the microfilm for the paper is only available from one library, so this could have been a very short story. But excited as I was about the find, I decided to contact that one library, the West Virginia and Regional History Center, on the off-chance that they would consent to checking their microfilm. To be honest, I didn't hold out much hope, as in the past when I've made library requests I've seldom come away with anything to show for it.

This time, though, I got lucky. Reference supervisor Jessica Eichlin agreed to have a graduate assistant spend some time on the trail, and before I knew it I had start and end dates for all three features, additional sample scans, and additional details about their runs. So with a big tip of the hat to the West Virginia and Regional History Center, let's get on to our now well-documented obscurities for today.

The first of Talbott's features in the Martinsburg News was called See For Yourself - In West Virginia. My samples of this feature (shown below) seemed to indicate it might just have been more of a straight illustration rather than a feature in which we'd be interested. However, additional samples sent to me by the library show that my two samples are not typical, that this was more often a panel with multiple cartoon vignettes, and not just showing beauty spots but also events from West Virginia history, like a Ripley's or Scott's Scrapbook sort of feature. It ran from November 27 1936 to November 19 1937. 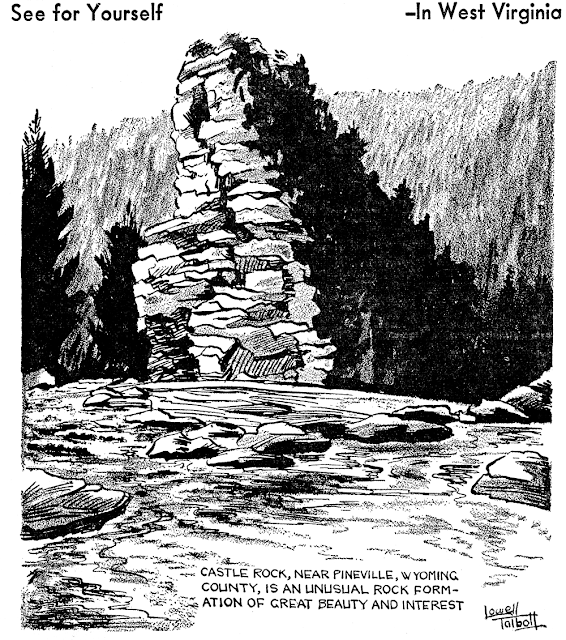 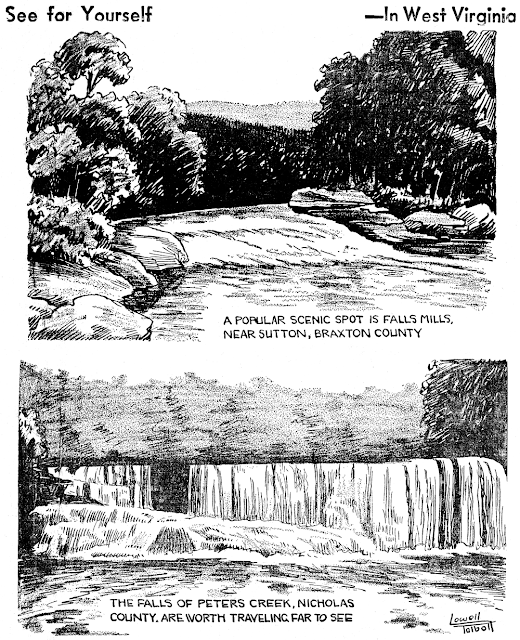 Evidently not content with his one weekly feature, on January 29 1937 Talbott added two more. Here is the promo article announcing them: 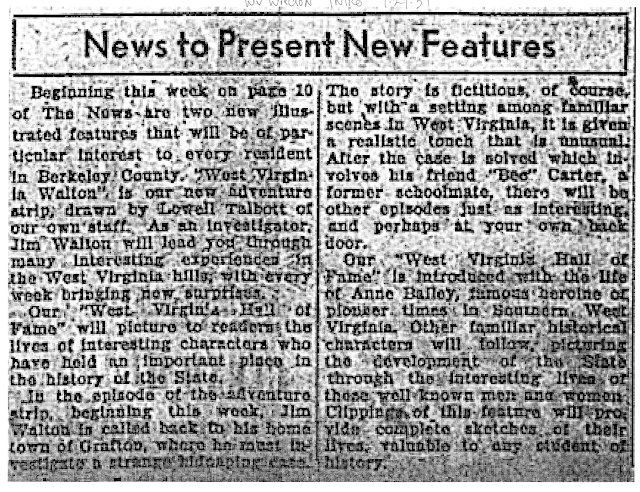 The first was a strip telling the stories of famous pioneer West Virginians, titled West Virginia Hall of Fame. Talbott shared credit with someone named Fortney on this strip; presumably Fortney contributed to the writing. The strip was really well done, both the writing and drawing were top-notch. Its only fault was the obvious disinterest of the typesetter in transcribing the text properly! Impressively for the times, two of the biographies were of pioneer women, Betty Zane and Anne Bailey. This feature ended on August 20 1937.

And now, the highlight of the three, a two-tier action-adventure strip about a pair of West Virginia fire investigators. The strip was initially titled West Virginia Walton. Here is the first strip, January 29 1937 (from microfilm): 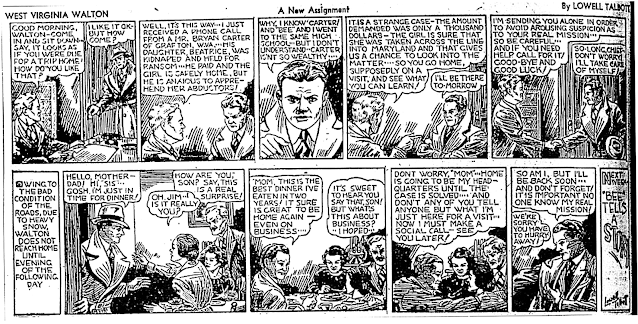 For some reason Talbott had trouble deciding who his primary character was going to be, and on April 23 he changed the title to Gary O'Neil in West Virginia (or Gary O'Neal or just O'Neal depending on the News' careless typesetter). By this time Talbott had also gained a writer, apparently, named Byers. Here is the first strip carrying the new title, from microfilm: 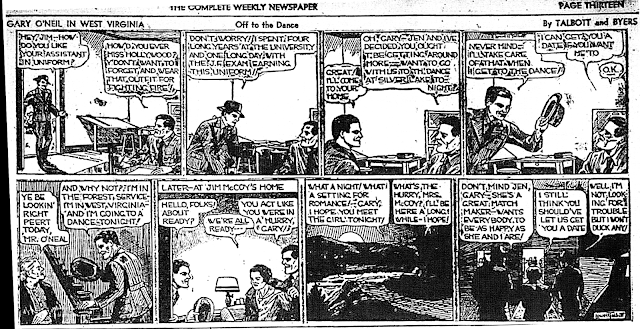 The firebug investigation continued, and here are the strips from my printed copies:

The strip ended on September 24 1937 with the capture of the firebug and the engagement of the lead with his girlfriend. The final strip, from microfilm: 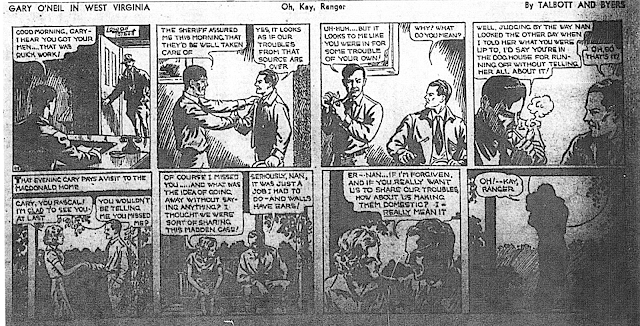 I think Talbott might have been better off writing his own material for this strip, as I'm not too impressed by Byers' writing. Although Talbott did not leave much of a digital footprint, I did discover that he wrote a weekly column in the 1960s for the Beckley Post-Herald, and by then he had indeed developed into a very fine writer.

While this might seem to cover all the bases, I can't help but think that Lowell Talbott, that whirlwind of creative energy in 1936-37, didn't begin and end his newspaper cartooning career with these three short-lived features. If and when the Martinsburg News is digitized, or someone in West Virginia takes the time to make a more thorough investigation of the microfilm, I have the sneaking suspicion that we will find more Talbott material lurking out there ... and he's worth the hunt, don't you think?

If anyone reading this is in the Morgantown area, please consider taking a day at the West Virginia & Regional History Center to give the Martinsburg News a more thorough search. Who knows what else Mr. Talbott might have produced!