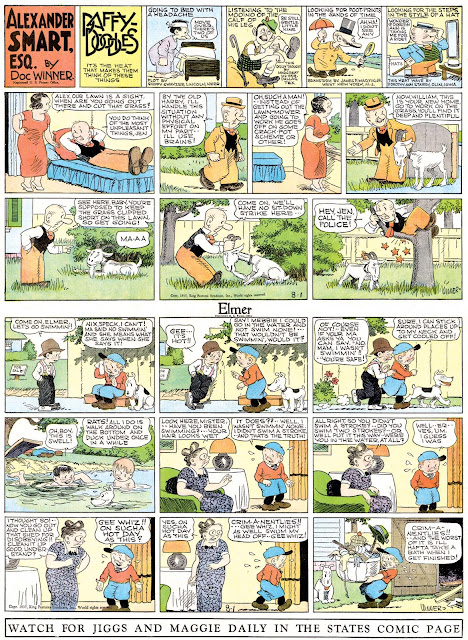 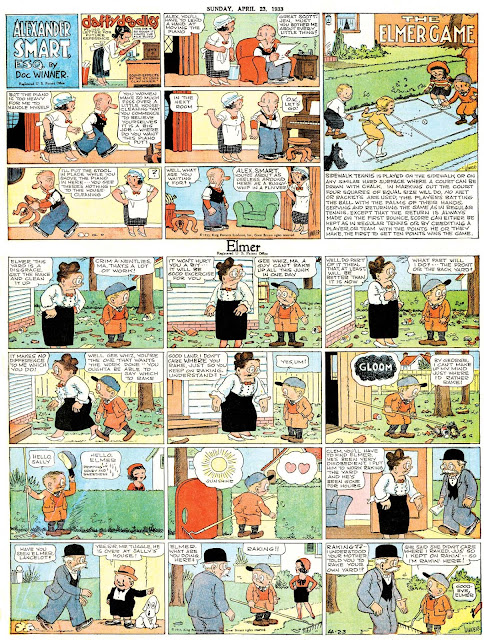 Maurice Horn described Elmer as "genial", which is probably the highest praise it is ever likely to receive. It seems to be one of those strips that stayed in papers due to inertia. The strip was about a 10-year old kid who got into relatively genteel comic strip boy troubles and escapades every Sunday. Under its original creator, A.C. Fera, the strip had a modicum of life, oddly benefiting from the cartoonist's flat, scratchy style. But when Fera for some reason left the strip and it was handed over to Charles "Doc" Winner in 1926, it became so formulaic that you can accurately extrapolate the entire thirty years' worth of Winner Sundays based on any one example.

When all the Hearst Sundays gained toppers in 1926, Winner (who was still ghosting the page under Fera's name until late 1926) tried out a few candidates, but finally settled on Alexander Smart Esq., starting with the July 4 1926 page. The character was not an attorney, so I assume that Winner used the term "esquire" in the British sense of someone untitled but of social importance. The strip was just as formulaic as Elmer itself; Alexander tries to outsmart someone, or to attack some problem with his supposed high intelligence, and everything backfires.

When other Hearst Sundays started adding multiple toppers, Winner added Daffydoodles on July 31 1932 It was a feature in which Winner would illustrate puns and other funny turns of phrase. Originally a single panel, it eventually grew to most often have four single-panel gags. Shortly after the feature began Winner began to credit the ideas to reader submissions. Given that he never told readers how or where to send in their submissions, my guess is that Winner made up a lot of the gags and reader names, but I must confess a spot-check of one unusual  name seen above, Dorothy Ann Starry, came up with an actual person.

Soon after Daffydoodles was added, a second topper began, called The Elmer Game. This large panel was, I think, the best thing about the Elmer page. Each week Winner would explain a simple game that kids could play with a minimum of equipment and setup. For kids looking for something to do on Sunday afternoon The Elmer Game must have been a real boon. It ran from January 1 1933 to June 9 1935, losing out to an expanded set of weekly Daffydoodles.

An interesting bit of trivia about Elmer and its toppers: while the main strip never merited a reprint book, and certainly Daffydoodles and Alexander Smart Esq. didn't either, The Elmer Game did. The book was titled Games Of Fun and was issued by K.K. Publications in 1934.

During World War II a lot of strips lost their toppers, or at least found fewer and fewer papers willing to give space to the typically second-rate material. Alexander Smart, Esq. and Daffydoodles seem to have succumbed to this trend. The latest I can find them running is on July 30 1944 in the Nebraska State Journal. But they could have been produced longer, and the papers that ran them became so few as to evade my radar. Anyone have any later dates?