Obscurity of the Day: Hapless Towser 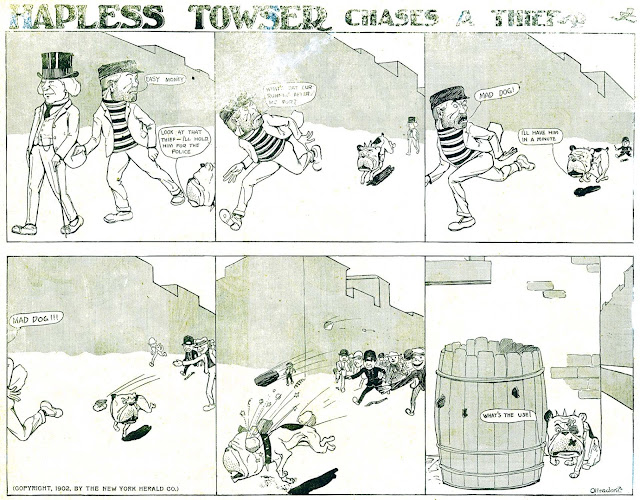 Hapless Towser was a short-lived strip about a dog who can't catch a break; it ran in the New York Herald Sunday comics section from January 26* to April 13 1902**. The creator signed himself Ollendorff.

At the time I was putting together my book, American Newspaper Comics, I weighed whether I was willing to assume this was Julian Ollendorff, an accomplished cartoonist who has series credits in the 1930s-40s. At the time I thought of that lengthy missing span of years and decided that chances were against it. I ended up listing the creator of this strip as just Ollendorff.

But now that Alex Jay has done the legwork to do Julian's Ink-Slinger Profile, I can be pretty confident that the wet-behind-the-ears 20-year old did actually produce this strip. Ollendorff is on record saying that he was working at the New York World as early as about 1901, and so it's no long-shot that he was shopping his wares around to other Big Apple papers at that time.

The art on Hapless Towser is a bit rough but it's easy to see that there's a wonderful cartoonist just at the cusp of mastering his trade. After this lone series Ollendorff would explore other venues for his art, mostly illustration and fashion work, for almost thirty years. Once he finally came back to the fold it was as an accomplished and confident cartoonist, producing wonderful series like Gloria and Olly of the Movies.

Comments:
Hello Allan-
I'm confused, you credit this to the New York Tribune, and Barker having a Tribune index, but I didn't think they had any comics that early, and the example shown has a Herald identia. Do you mean Herald all along?

Argh! Thank you for catching that. Yes, it should be Herald!