Obscurity of the Day: Maiden Meditations 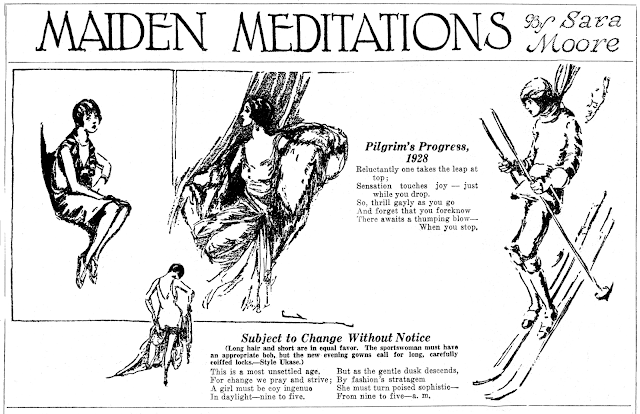 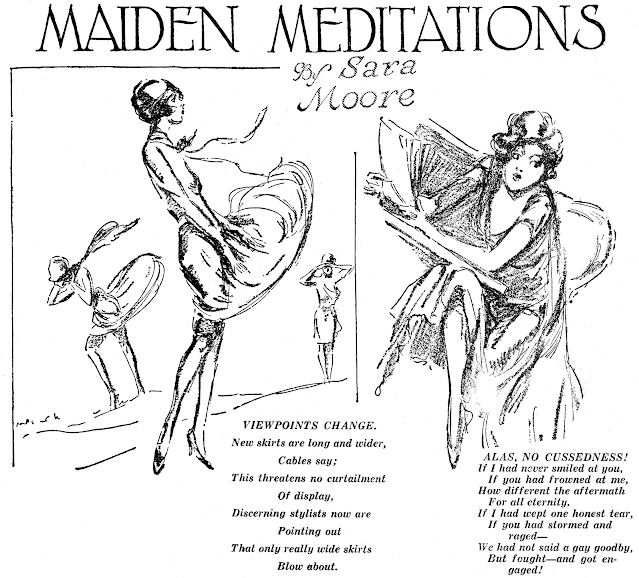 Among the women cartoonists of the earlier part of the 20th century, Sara Moore (aka Sara Moore Eastman) stood out for not having what I would call a 'frilly' or feminine style. She was a darn fine cartoonist/illustrator, and although her subjects were often touching on that female cartoonist staple, romance, I think she rose above the sterotypical material. What she lacked, though, was the instantly recognizeable style of the top echelon of her sorority. Although she had a long and prolific career, she never became a household name by any means. She even stayed under the radar to cartooning historian Trina Robbins, not rating a mention in any of her books on women cartoonists.

Moore created several newspaper series over a span of three decades, including some that involved just as much writing as art. We're going to look at her latest known cartooning work today, the feature Maiden Meditations that she penned for the Chicago Tribune from December 27 1925 to March 27 1932. The weekly half-page feature, usually consisting of several vignettes, mostly hits the subjects of romance and fashion with cheesecake drawings for the fellas. Although the feature was offered in syndication, it is rarely found outside the pages of its home paper.

As best I can tell Sara Moore retired after this feature ended, but it wasn't because she was elderly. Although I don't have a birth year, she died in 1969, some thirty-seven years after Maiden Meditations ended.

Comments:
I have a Sarah Moore, per Editor & Publisher in 1913 - likely to be the same one? I have no images to share, unfortunately. My entry for Sarah Moore: In 1913, while working for the Detroit News, she contributed a drawing to a national cartoon compilation of autographed sketches, begun in 1904 and possessed by James D. Preston, Superintendent of the Senate Press Gallery.

Probably, I recall a Detroit connection. She was already nationally syndicated by this time, starting in 1911.