Obscurity of the Day: Preparedness 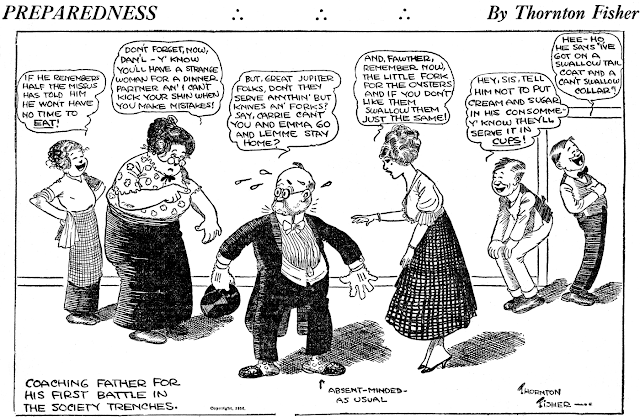 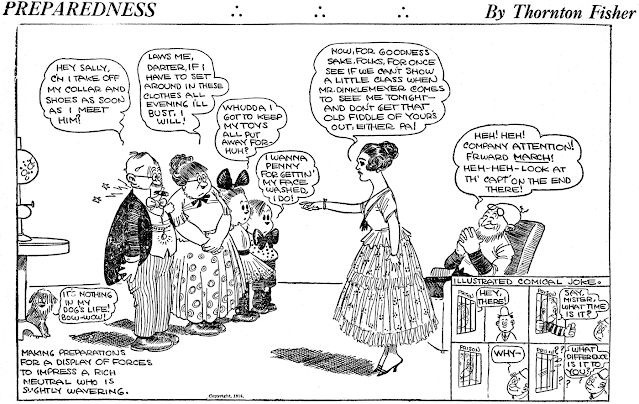 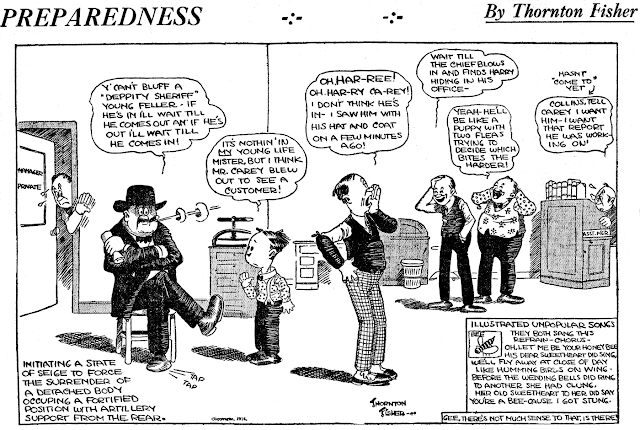 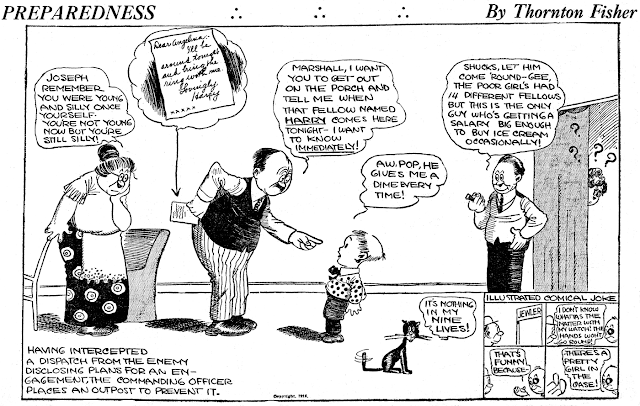 Here's a feature whose reason for being is arguable more interesting than the feature itself.

Thornton Fisher, a mainstay at the New York Evening World in the 1910s, took a break from his usual strip work to create the panel series Preparedness, which debuted on January 31 1916. Reading samples today you may be forgiven if the theme of the panels is anything but apparent. The key, it turns out, are the captions, all of which use militaristic terminology to describe the activity going on in the cartoon.

In 1916 the U.S. was still sitting out the war in Europe, officially neutral though leaning heavily toward supporting the Allies. The more hawkish contingents in the U.S. were itching to get involved, and they came up with a proposed national policy called 'Preparedness'. The idea as it was put forth was that to keep us safely out of war we need to immediately develop a strong and highly prepared military -- no one would dare attack us or risk our involvement if we are seen as an unbeatable juggernaut. The concept was pure misdirection and everyone knew it, but the notion did catch on as the war in Europe ground on. Even President Wilson, originally a vocal critic of the idea, cozied up to it in 1916, evidently realizing that our involvement was just a matter of time and that we should indeed start getting prepared.

Okay, so with that in mind, we can reread these panels and see how they all tie together. The day's actors (there were no recurring characters) are in the midst of some sort of crisis, and they are preparing to meet the situation head on and with strength of numbers. The theme is carried through into the captions, where Fisher uses military mumbo-jumbo to drive the theme home.

Preparedness ran in the Evening World until April 6 1916.

Comments:
I was more taken with the "Illustrated Comical Jokes". The title suggests they're lame on purpose, an early example of ironic, almost inside snark. Problem for a modern reader is whether they really were lame compared to the main panel.

"Illustrated Unpopular Songs" leans the same way, the title itself being a clearer gag. The "illustration" being a tiny captioned square is also kind of clever. The verse and the added comment sadly fall short.

Of course, a hundred years from then who'll care?