March 10 1910 -- Fireman Jim Flynn has signed on to duke it out for a third time with Sam Langford, a fighter who pretty consistently had his number. In the first fight he lost by knockout, in the second he was either awarded a close decision or it was a draw, depending on who you believe.

This fight will be different in that it is scheduled for a whopping 45 rounds, a rare long bout that was generally out of fashion by 1910, and unusual enough for Herriman to devote a strip to it.

Comments:
Outcome of the fight:

From the Sub-Basement of the Archives: Ads for "All The Funny Folk" 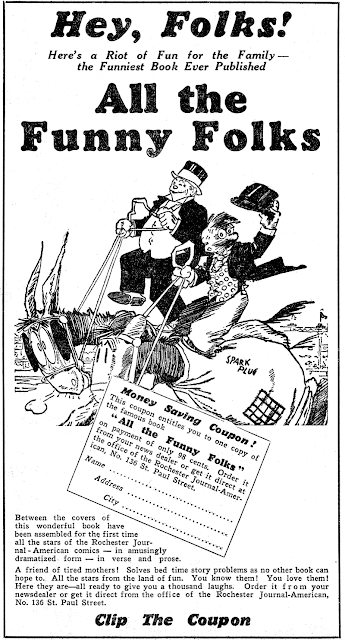 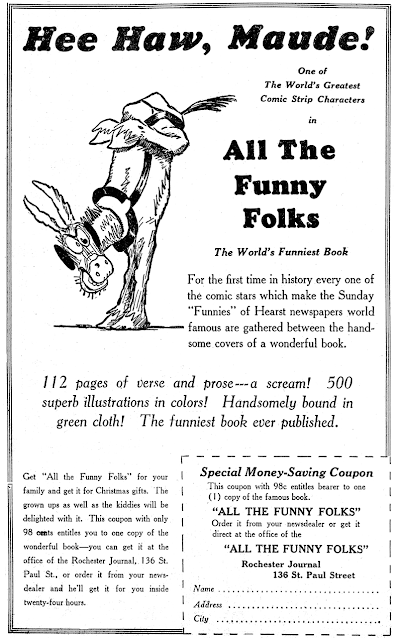 Here's a pair of ads for the 1926 children's book "All The Funny Folk", which starred the whole galaxy of Hearst comic strip stars. The Rochester Journal-American is willing to discount the large hardcover book to a mere 98 pieces of copper. I don't know what the regular price was, but I have seen that Cliff Sterrett autographed copies in a Brooklyn department store that Christmas, and charged a buck apiece. Two cents for the autograph of a famous cartoonist seems quite the bargain, even in 1926!

If you're trying to remember what this book looks like, simply look at the cover of your copy of American Newspaper Comics -- An Encyclopedic Reference Guide. The cover is adapted from that 1926 tome. 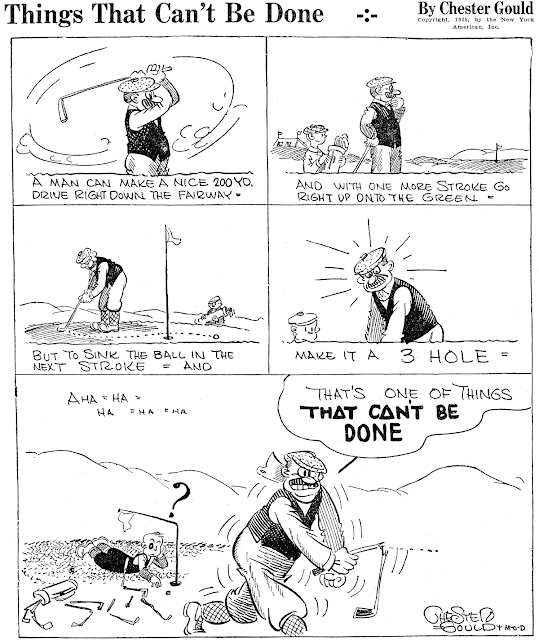 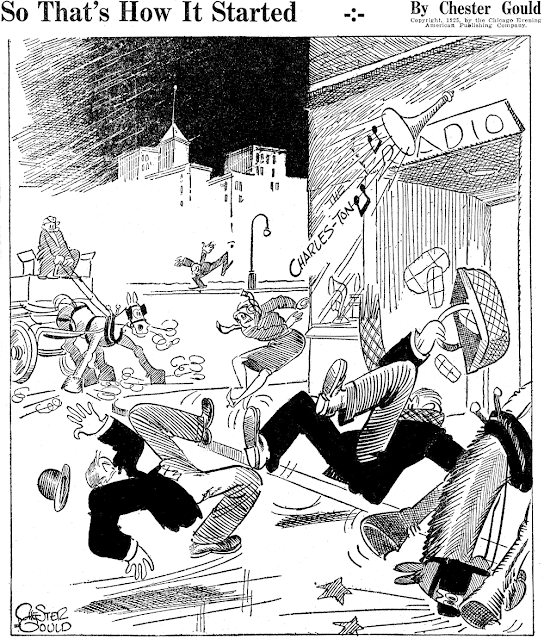 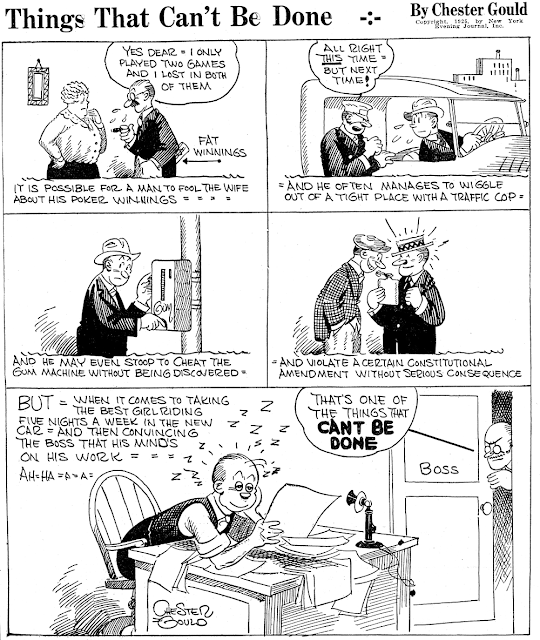 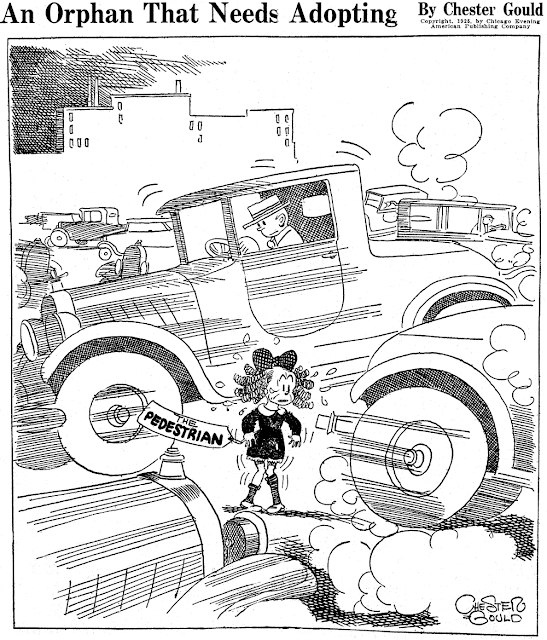 Chester Gould, later of Dick Tracy fame, spent several years at the Chicago Evening American in the mid-1920s honing his craft and producing a slew of material. Unfortunately this early work by Gould is little known, and the histories I've read only talk of it in vague generalities and offer a lot of incorrect information. To that problem I have not been immune, and the information about early Gould material in my own book ticks both boxes -- it is vague and offers incorrect information.

For instance, I have since learned from Jean Gould O'Connell's book about her father that The Radio Catts and The Radio Lanes (which I list separately) are actually the same strip -- it went through a title change partway through the run.

O'Connell also shows a few samples of an untitled panel cartoon series Gould produced, but doesn't really say anything about it in her text. She seems to consider these editorial cartoons, even though most of them are strictly gag-oriented.

I recently got a sampling of the cartoons, all of them dating from August 1925. Although some are vaguely and limply editorial in nature, like the bottom example here, most are strictly playing for laughs. In fact, there was at least one running title used (Things That Can't Be Done) that would seem to indicate that Gould was trying to achieve something at least adjacent to the Briggs/Webster mold.

Based on this sampling I believe there was a series worthy of listing in my book, though my information is essentially a mere few shards of a smashed pot. O'Connell's book seems to show a sample of the feature from 1926, so I gather it ran a good long while. I also note with some bemusement from my examples that they are copyrighted to just about any newspaper Hearst owned, the choice apparently being based on nothing more than what the typesetter took a fancy to at the moment.

If anyone knows of a source for good primary source information on Gould's early series, I'd sure like to know about it. I confess that I haven't kept up with the various Dick Tracy reprint books, wherein there might very well be the occasional article about his early work. Of course, the ideal solution would be a trip to the Abraham Lincoln Presidential Library in Springfield Illinois, the only library that has a substantial amount of Chicago Evening American microfilm, albeit missing some important months. Sadly, crossing the Canada-US border in these days of covid is a major undertaking and I won't be making that trip anytime soon.

Comments:
Hello Allan-
I see that "THINGS THAT CAN'T BE DONE" lasted at least to 6 November 1925 in the Rochester Evening Journal, and Gould's (apparent)one shots were there at least to 23 July 1926.However, if you're familiar with the online files of that paper, you'll know it's rife with gaps and missing pages.
It would seem that they were going to have Gould be a lesser member of the editorial cartoonist pool for the Hearst chain papers, which was lead by T.E.Powers, and O.P.Williams. Gould's contributions seem to appear least frequently, maybe every fortnight. A similar thing hapened about 1929-30, with Jimmy Hatlo out of the SF Call, except that Gould had a great idea for a humor panel, and Gould's comics for Hearst, (Like "Fillum Fables") generated no interest.

That is, HATLO had a great idea for a humor panel....That being of course, "They'll Do It Every Time".
-MJ

Richard Marmon Brand was born on July 25, 1900, in Urbana, Ohio, According to his World War II draft card. In the 1910 U.S. Federal Census, Brand was the only child of Thomas, a dentist, and Bessie. The family resided in Urbana at 403 Church Street.
On September 12, 1918, Brand signed his World War I draft card. He was a student who lived at 229 Scioto in Urbana. His description was slender build, medium height, with blue eyes and light brown hair. Brand named his mother as next of kin.
The same address was recorded in the 1920 census. Unemployed Brand lived with his parents.
Shortly after the census Brand moved south to Cincinnati. The 1921 Cincinnati city directory listed Brand as a Commercial Tribune reporter whose address was 540 West 7th. Editor & Publisher, February 11, 1922, said “Richard Brand has left the Cincinnati Commercial Tribune to go on the desk of the Columbus (Ohio) Dispatch.”  “Richard M. Brand” was his byline at the Dispatch.
The Ohio Archaeological and Historical Publications, Volume 31, 1922, told the story of Brand’s portrait of Senator Thomas Morris that was drawn based on a person’s memory.
Brand illustrated at least one of his articles. Below are details of his illustration in the Dispatch, April 25, 1926. 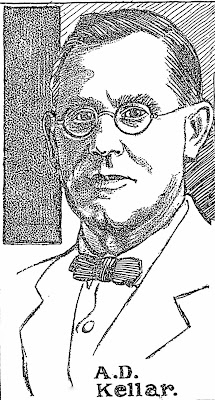 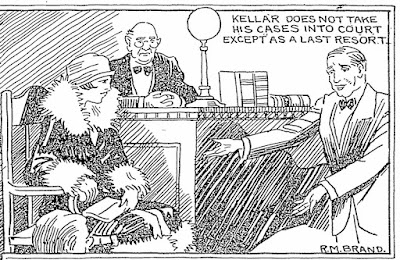 American Newspaper Comics (2012) said Brand produced the Sunday panel, Along Our Street, from September 12 to December 5, 1926, for the Dispatch. Information about his art training has not been found.
The Dispatch, October 12, 1927, reported Brand’s marriage, to Helen Armpriester, which took place on June 4. The paper said Brand attended Wittenberg College at Springfield and Ohio State University where he was a member of Phi Kappa Psi.
In the 1930 census, the couple were Columbus residents at 55 Hamilton Avenue. Brand was a newspaper reporter. The 1931 Columbus, Ohio city directory listed the same address. He was employed at the Dispatch.
According to the 1940 census, Brand had returned to Urbana where he was the head of the household, which included his father, a widower. Brand’s house was valued at $6,000 and located at 239 Scioto Street. He was a self-employed magazine writer who had three years of college education. The Dispatch, March 10, 1952, said Brand wrote true detective stories for several national magazines.
Brand signed his World War II draft card on February 14, 1942. His address was unchanged. He was described as five feet five-and-a-half inches, 138 pounds, with blue eyes and brown hair.
The Dispatch, February 27, 1944, said Brand was named news editor of the Urbana Daily Citizen. He also served several terms as coroner of Champaign County. In 1950 Brand settled in Naples, Florida where he was editor of the Collier County News.
Brand passed away on March 9, 1952, in Fort Myers, Florida. He was laid to rest at Oak Dale Cemetery. 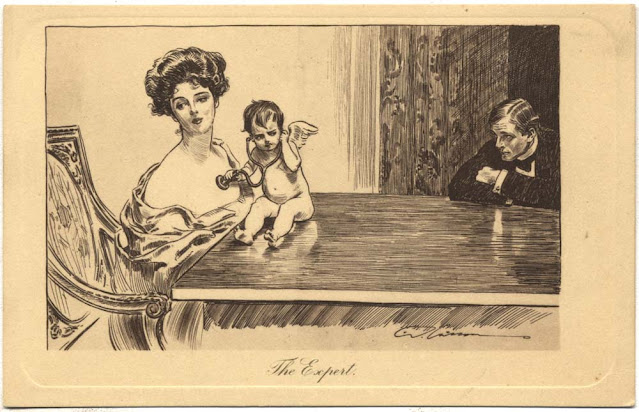 Here's a Charles Dana Gibson card from the British postcard firm, Henderson and Sons. Others that I've seen are numbered, but this one isn't. It features one of Gibson's more famous cartoons, "The Expert." The expressions on the three subjects make this a real tour-de-force.

Comments:
Wonderful! Gibson's art is usually much better than his subject matter, but not here.

Any idea what it is trying to say?

It would seem, judging by the expressions, that Mr. is anxiously waiting for Cupid to relay his opinion of what is in the heart of Miss, (vis-à-vis HIM)and though her expression is oblivious, Cupe's would imply an unfavorable outcome for Mr.
The allegory is Cupid is a heart specialist, or, expert, like a doctor,and using a stethescope makes the connection.
Weren't the Victorians precious?

Thanks Mark. That makes a lot more sense when you put it that way. Interesting look into the minds of another era.