March 13 1910 -- Herriman suggests that Jim Jeffries needs all the great boxers of his bygone era to come to his aid in getting ready for the Fight of the Century. Whether Fitzsimmons of Tom Sharkey ever actually showed up at the training camp I don't know, but James J. Corbett did become his lead trainer and cornerman at the fight.

Obscurity of the Day: Feet of Clay 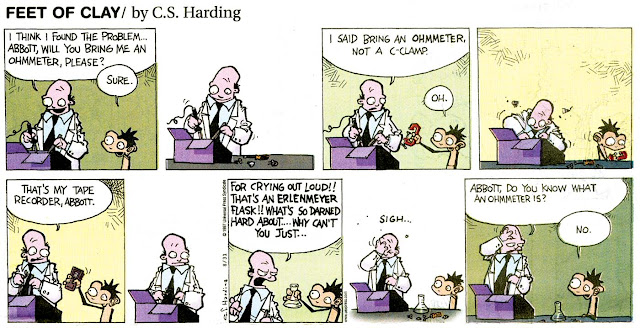 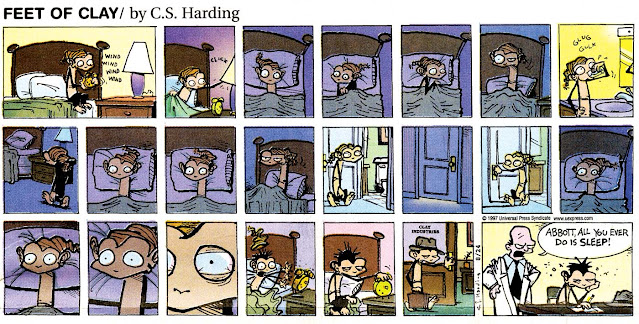 Chris Harding came down with a bad case of the cartooning bug at the University of Arizona, where he was working on a degree in engineering. He began submitting cartoons to the Daily Wildcat, and eventually found that he was much more interested in that than his courses. He switched to an art major and after a few other series he created the strip Feet of Clay for the student newspaper. Feet of Clay takes place in a science lab and stars scientist Dr. Peterson and his monkey lab assistant, Abbott, along with secondary characters like Herriman the robot.

Nearing graduation, he sent the strip around to syndicates, and got a development contract from Universal Press Syndicate. He also got a job offer from Hallmark Cards that was too good to pass up, so he accepted both gigs.

The daily and Sunday Feet of Clay debuted in a very small list of client papers on August 28 1997*. Only months into the strip Harding realized that his occasionally dark humor was not considered fit for newspapers, taking some of the shine off syndication for him. He had to water down his material for the audience, a fact that evidently didn't come up during the development period. There was also the small matter of working incredibly hard to keep up with both the strip and his day job.

Barely six months into the run of Feet of Clay, Harding decided that he had to choose between Hallmark and syndication. His decision, made easier by the lack of money coming from Feet of Clay, was to dump the strip. The final episode would run on March 7 1998*.

Harding has since made a name for himself in the animation world, and with an online comic strip called We The Robots.

* Source: Detroit News (but they only ran the comic on Saturdays and Sundays, so they did not actually start it until the end of the first week cited).

Comments:
Love this. It would work perfectly today as a digital/online comic strip on it's own website and around the internet on social media, too.

For the 1988 survey we had two papers that printed their last editions (Springfield Leader and Press (MO) and News (Paterson, NJ)) also we had 5 papers missing their information for this month so for this survey we had 273 papers.

In the Top 30 strips this year we had 31 because the 30th position was a tie. Two strips enter the Top 30, one new and one returning after dropping out. Calvin & Hobbes is our new entry and Berry’s World is the returning strip. The strip that fell out of the Top 30 was Funky Winkerbean.

The biggest movement was the Far Side which gained 5 places, going from 13 to 8. Andy Capp makes the biggest drop, losing three spots and going from 16 to 19.

Garfield gained 4 papers and now is one strip away from knocking Blondie out of the 2nd spot. No new strips entered the 100-paper club keeping its membership at 15, but a few strips are getting closer to that magic number. Cathy and Born Loser continue their small gain and if Calvin & Hobbes continues its big gain, it should join the 100-club next year.

Here are the Top 30 strips:

The popularity of the universal comic section continues to grow. Here is the breakdown:

The Tampa Tribune takes back its crown of the most universal comic section with every one of the top 15 strips.

Here are the remaining strips that appeared in the Top 300 papers, ranked by newspaper count and increase/decrease:

2 – A Little Leary, Ben Wicks, Boner’s Ark, Bringing Up Father, Captain Vincible, Dollars and Nonsense, Duffy, Inside Out, Mickey Mouse, Off The Leash, Popeye, Ripley’s Believe It Or Not, Winnie the Pooh

As always, you can get a complete list of features and the specific newspapers in which they appeared, just shoot an email request to strippersguide@gmail.com.

Jeffrey Lindenblatt's Paper Trends: The 300 For 1988 -- Biggest Gainers and Losers

The biggest losers are two recent strips, U.S. Acres down by 16 papers and Gummi Bears dropping 11 papers. The rest are the adventure strips on their slow downward spiral, and the incremental loss of popularity of the NEA package. Here are  the rest of the biggest losers:

And again we track the continued losses of the adventure strips. The only one gaining was Brenda Starr, perhaps reflecting the writing of relative newcomer Mary Schmich, a respected name in newspaper circles:

It is interesting that 1988 will be the last year for both Steve Canyon and Captain Easy. When we started this survey with the year 1978 Steve Canyon had 62 papers and Captain Easy only had 42 papers. Now in its last year Captain Easy had more papers than Steve Canyon, though of course both are way down from those 1978 figures now. Maybe in the future we can go backwards and see what their highest totals were. Also, it is clear that the syndicate did not want to continue with Steve Canyon after Milton Caniff passed away. I wonder how many years the strip would have continued if Caniff hadn’t passed away.

On the soap opera strips it was a much better year, They only lost 4 spots.

The most popular rookie strip starting in 1987 continues a pattern we had in previous years -- a strip from the NEA package replacing another NEA strip that was cancelled. The last time this happened was in 1985 when Arlo and Janis replaced Levy’s Law. This time we had the Grizzwells replacing Snake Tales. The Grizzwells debuts with 22 papers which is an increase of 5 more papers than Snake Tales had in 1986.

Coming in second is What A Guy with 14 papers. This is by Bill Hoest, who now offers his third comic strip, along with Agatha Crumm and The Lockhorns. This is case of the previous success of the artist being rewarded with editorial trust and approval.

The rest of the rookies of 1987 did not make much of an impact on the daily newspapers, at least early on. The best only ran in 6 papers. The trend continues to be that editors are being very conservative in changing their features, mainly adding strips that have been successful in other newspapers. Here is the breakdown of the rest of the rookies.

Comments:
Hoest also had a weekly panel in Parade, the syndicated Sunday supplement. It was about Howard Huge, a lovable Saint Bernard.

Wish You Were Here, from Rube Goldberg 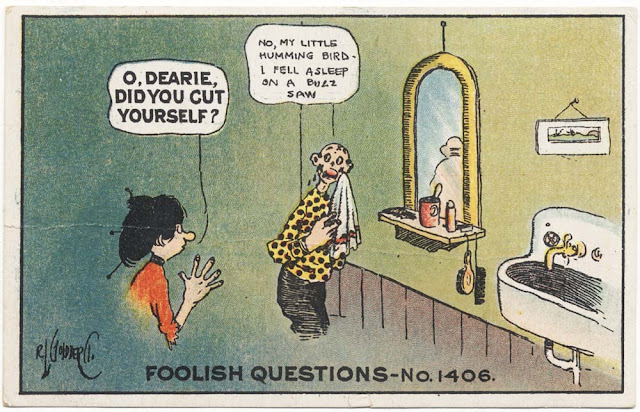 Here's another Foolish Questions postcard from Rube Goldberg, issued as part of series #213 by Samson Brothers. Another lackluster entry in this series, which seemed to use Goldberg's cartoons more or less at random, offfering both masterpieces and clunkers from that very popular series.