March 17 1910 -- It's the day of the 45-round Fireman Jim Flynn - Sam Langford fight, the big scrap that Herriman has been flogging in his cartoons now for over a week. And where is Herriman on the big day? He's off giving a pan to a new theatrical revue!

Herriman not only drew the cartoon for this piece, but wrote the article, too. Shame, then, that my fleet-footed copying of these cartoons led me to miss that fact and not get the review as part of my takings. Refunds will be offered on your way out the door, folks.

The only name here that rings a bell is Charlie Ruggles, an actor who would eventually become an ubiquitous character actor, on stage, on radio and on large and small screens.

Comments:
I believe "Lew" Stone is Lewis Stone, who played Judge Hardy in the Andy Hardy series of movies.

Philadelphia cartoonist Joe Cunningham went off to fight in World War I, and when he was finished with his part of winning the war, it occurred to him to chronicle his re-entry to civilian life in cartoon form.Thus was born John Sapp, Demobilized Doughboy. The feature began as a series of illustrated columns in the Philadelphia Evening Ledger in January 1919, then lay fallow for awhile before restarting as a daily strip on March 31 1919.

Cunningham was never going to give S.J. Perelman a run for his money as a humorist, but the gags in John Sapp, which soon devolved into, at best, standard jokebook fare, are downright embarrassing. Cunningham was a perfectly adequate sports cartoonist, and he should have stuck with that. But he must have had some dirt on someone at the Ledger because his whims to start strips were indulged over and over again. As a returning war vet, perhaps the Ledger felt this strip was his due. But even honoring a veteran has its limits, and the Evening Ledger stopped running the strip on August 23 1919. But in syndication, surpringly, the strip actually lasted even longer. The final strip in the series, shown as the bottom example here, ran on September 20 1919**. Thankfully John Sapp's 'vacation' proved to be permanent.

Obscurity of the Day: Still Life 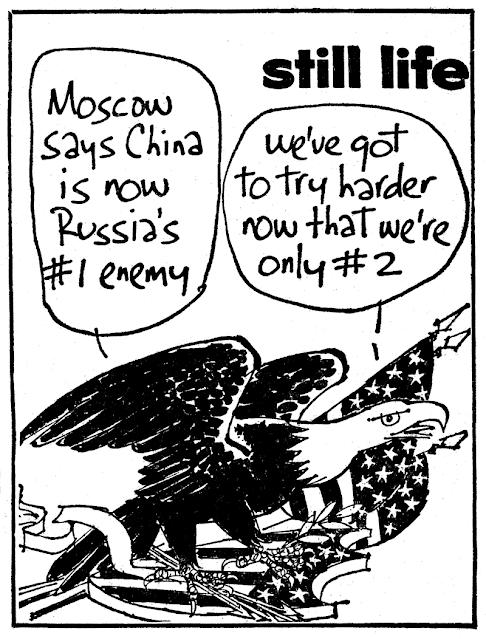 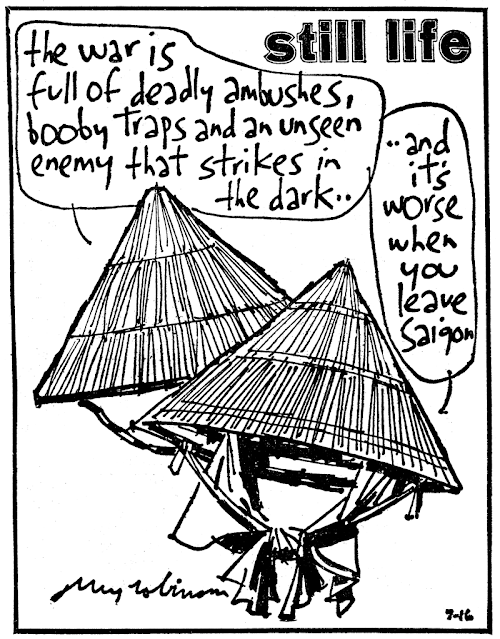 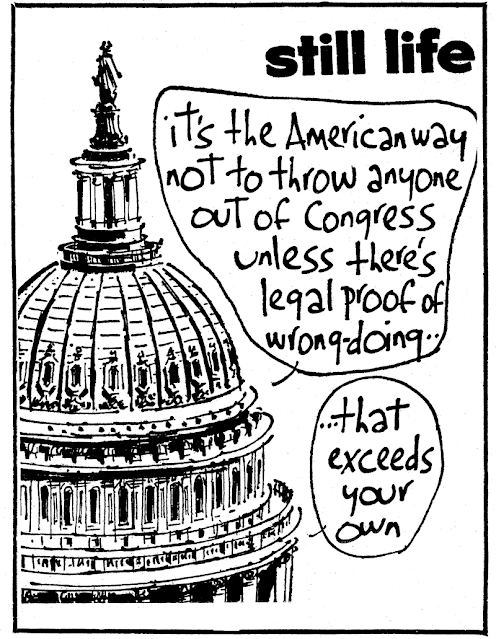 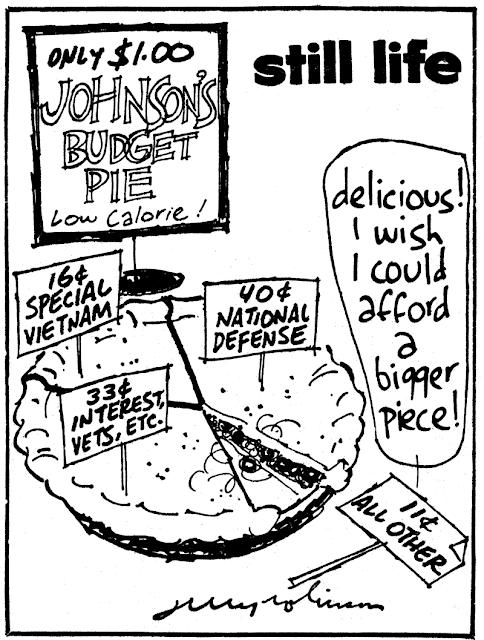 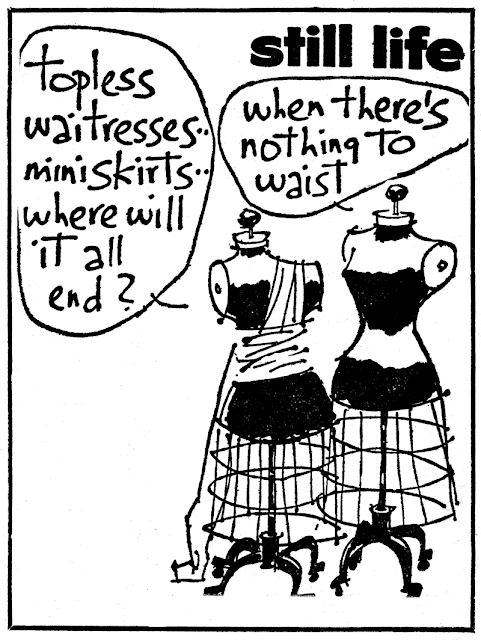 Jerry Robinson, best known for his important role in the early years of the Batman comic book, later moved from comic books to newspaper cartooning, and not only had several successful features but even ran a small syndicate for many years.

Robinson's first foray into newspaper work was as the artist on Jet Scott, an impressive but ultimately unsuccessful adventure strip that ran 1953 to 1955. With that bad taste in his mouth, it is perhaps unsurprising that Robinson's next feature did not get into papers until eight years passed.

On January 17 1963*, right in the middle of a newspaper strike at the New York Daily News, Robinson's new feature Still Life debuted in the Daily News' strike version, which was called the Metropolitan Daily.  Although the feature was half-heartedly offered in syndication by the Chicago Tribune-New York News Syndicate, it never had more than a few clients. The bread-and-butter client for the panel was always the Daily News itself.

Still Life attempted to answer the question, "what would inanimate objects have to say if they talked about the state of the human world?" While that may seem like a rather bizarre question, in Robinson's capable hands it gave him the ability to comment on politics, society and current events in a quite serious way, yet offer those opinions in a way that could produce a smile. The sidestepping of human caricatures also gave the feature an original look that worked well on either the op-ed page or with the comics.

It may well be that the feature's spanning the gap between the worlds of editorials and gags made it a no-sale. Too serious for the funnies page, too flippant for the editorial page, it occupied a no-man's-land and newspaper editors just didn't know what to make of it.

Thankfully, the New York Daily News did not fail to see the value of Still Life. It ran there for almost a decade and a half, ending on October 15 1977** only because Robinson decided to replace it with a new but very similar feature, Life With Robinson.

Comments:
Hello Allan-
I remember this panel. I never thought much of it, it came off as an unfunny knock-off of PIXIES. I never realised that it preceeded and anteceeded Wohl's panel.
Quite understandable it wasn't widely syndicated. It's kind of a given that editors don't want to put politically charged features among the neutral, family-friendly material on the comics page, and generally speaking, every inch of the editorial pages is too important to fill with more than one topical cartoon, that would be a formal editorial effort.
One thing I recall about it, and you have one here-it ran against it's own premise- the term "still life" means inanimate objects, yet it often had bugs or mice, or even birds in play. 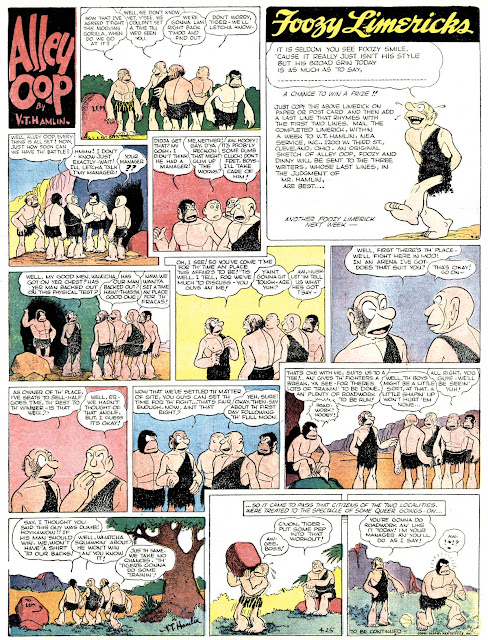 Alley Oop went through its fair share of toppers in the 1930s and 40s, several of them offering a starring role to Foozy, the Oop character who always spoke in rhyme. Depending on how you feel about that conceit, extra Foozy on Sundays might make your day or ruin it.

Foozy Limericks was a panel feature and contest in which readers are invited to submit their ideas for the last line of a Foozy rhyme. You didn't have the leisure to mull it over, because V.T. Hamlin wanted your submissions by the end of the coming week. Production schedules for colour Sundays being six weeks or more, contest winners could not be announced in the strip itself, but were instead sent as press releases to NEA-subscribing newspapers. The quality of the submissions must have been plain awful, because those press releases always gave the names of the prize-winners but never the lines that they had submitted.

Foozy Limericks didn't last very long. It debuted on February 21 1937, and the last contest was on May 16* of that same year. It was replaced by a cut-out feature that we'll cover here one of these days.

Wish You Were Here, from F.R. Morgan 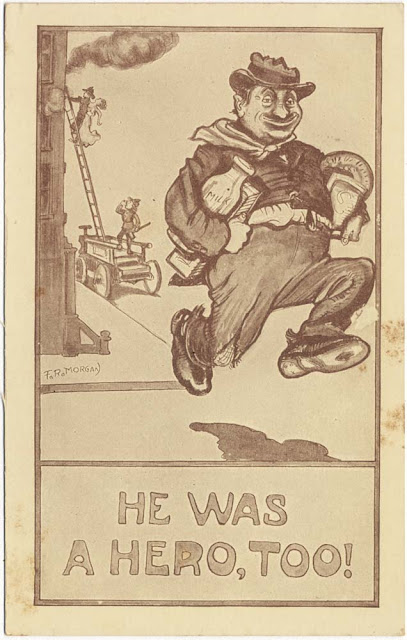 This postcard is by F.R. (Fred Royal) Morgan. The maker of this series of cards is anonymous, but they did code each card; this one is A-493. In Morgan's 'hobo series' (the only series I know he produced) are lots of standard hobo gags, but I confess I really don't get this one. Is it that this hobo has gone above and beyond the call of duty, thus a hero, by stealing a prodigious amount of food from somewhere?

Comments:
He saved the food from the fire, isn't it?

It would seem it's sarcasm; the hobo's actions mock the fireman's. The smoke eater is called a hero for saving the girl from a fire, he is selfless,heroic. The 'bo saves the eats from the same conflagration because he is selfish, a looter.
So Mr. Morgan finds comic irony in casting his actions on par with the firemen.