March 19 1910 -- Three days after Sam Langford knocked out Fireman Jim Flynn, Herriman finally weighs in with a comment that the "lily white club" of fighters had better get used to Sam Langford, like the cat in the old song, to just keep on coming back. Next in Langford's sights is an easy mark, Jim Barry. After a short run of wins when he went pro in 1907, Barry's record has been sinking steadily. He's just off an uncharacteristic string of four wins, though, so Langford can take him on without seeming like he's just taking easy pickings. 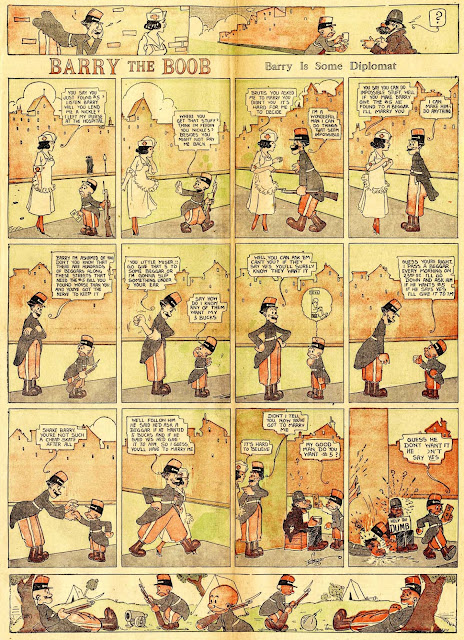 I have nothing new to say about E.C. Segar's early feature, Barry the Boob, which we covered as an Obscurity of the Day back in 2015. However, that post offered a sample of the strip that was in pretty sad shape, and here's a much better one that Cole Johnson sent me way back when. This one dates to November 11 1917.

Obscurity of the Day: The Strange Adventures of Bob and Betty in Cut-Outs 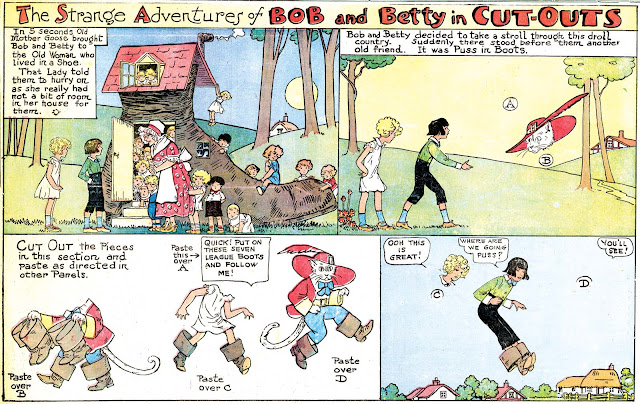 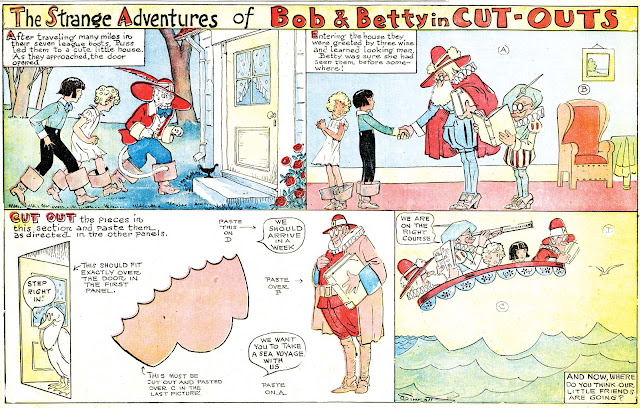 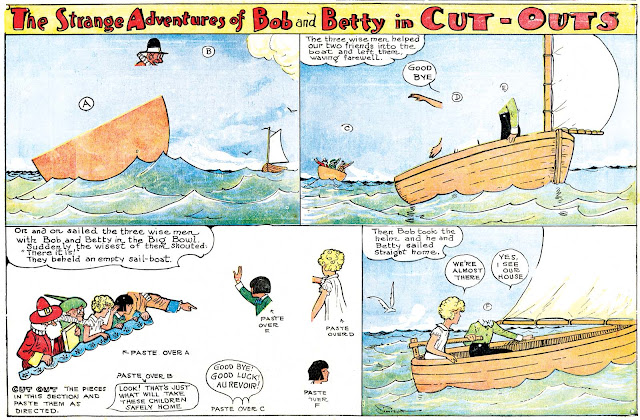 It always astounds me these days to look up a cartoonist on Stripper's Guide and find that they've never been discussed here. Granted, that's to be expected for cartoonists who only had a single obscure feature, but when I realize that someone like William J. Sinnott*, who was an active newspaper cartoonist for two full decades or more, has been ignored here for almost twenty years, I just have to scratch my head and be amazed at how much ground there is to cover.

To add insult to injury, I've finally got a post about one of his features, and it is certainly the weakest one he produced. It is The Strange Adventures of Bob and Betty in Cut-Outs, and it offers us a brother and sister on a tour of classic fairy tales. The novelty, though, is that each panel is missing bits and pieces of art and word balloons. The idea being that junior will have a gay old time cutting out all the missing bits and pieces that have been corraled into an extra panel, then place them where they should be in the remaining story panels. Once all that is done our industrious rugrat is treated to reading the strip in its now complete glory.

I realize kids were entertained by simpler pursuits in the 1920s, when TSAOBABICO (as we fans  know it) was running, but this just seems a bit pointless. It doesn't exactly take genius level mental gymnastics to make the substitutions in your head as you go along. There seems to be a maximum of two 'puzzle pieces' missing from each story panel, and they are identified so that there is no guesswork involved. Plus, there's no payoff for paper doll lovers, because most of the bits and pieces are incomplete and there's no clothes to add to the characters.

The feature ran in the Boston Globe's Sunday funnies section as a half-page, in which relatively small space (by 1920s standards) Sinnott could only manage three panels of story per week. He does his darndest to make things move along quickly, but that comes at the expense of character development and plot. Bob and Betty just hop mindlessly from one fairy tale character to the next.

The Strange Adventures of Bob and Betty in Cut-Outs ran from November 4 1928 to April 7 1929. This was William J. Sinnott's final feature for the Globe, and he was already by this time only cartooning as a moonlighting job -- he became advertising manager of a Boston department store in the mid-1920s.

When Sinnott bowed out, someone at the Globe still evidently thought this cut-out concept was a winner. Bob and Betty were sent into retirement, but a different creator jumped in with a very similar feature called Around the World with Pinky and Peggy in Cut-Outs. It only lasted about three months.

* Major oops: I use the named Arthur Sinnott on all of William J. Sinnott's features in my book; Arthur was actually the editor of the Paterson Evening News.

Found in the Stacks: Ed Carey Draws the Cartoonist's Nightmare 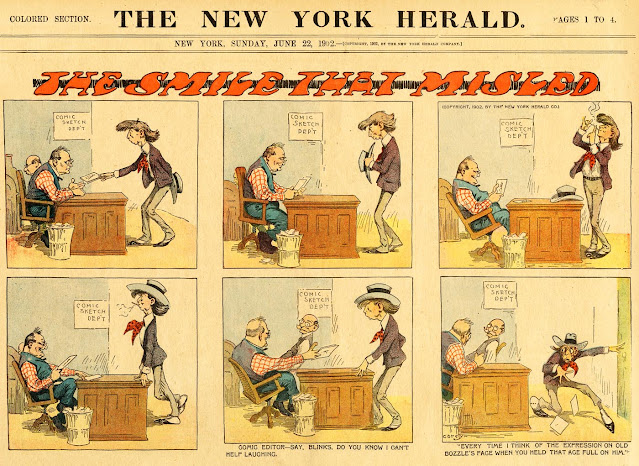 In this 1902 one-shot strip for the New York Herald, Ed Carey shows us that the aspiring cartoonist's REAL nightmare is not rejection, or even being thrown out on your keister. No, it is the sublime pain of utter indifference. What a masterpiece of body language and expression in this incredible strip!

Comments:
Incredible indeed. Have you posted any of Carey's other cartoons here, or do you have any that you can post?

A very sophisticated understanding of the uses of the (relatively new) art form, the comic strip. Kudos for Ed Carey in 1902!

Anon--
try typing "Ed Carey" into the blog's search boxto find other features by him.

Wish You Were Here, from Grace Drayton (?) 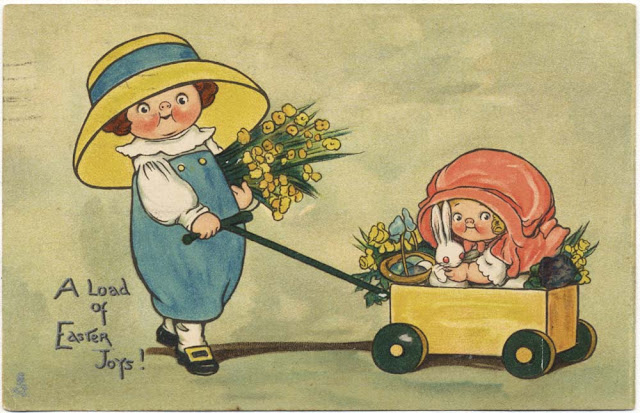 While we recently saw that Tuck had a Grace Drayton imitator doing some cards, to my eye this appears to be the real deal, though it is unsigned. This was card #1000 in the Tuck "Glad Easter" series, and is undated but postally used in what just might be 1914 (the cancel is blurry).

I had no idea that the 'approved' adjective for Easter was once "Glad" until I was trying to do a little research on this card. Today "Happy Easter" is accepted just as much as "Merry Christmas" and "Happy New Year". I rather like Glad, it's a little more picturesque than the rather generic Happy.

Comments:
Are they the Campbell Soup twins? They look exactly like them.

Ah, Wee Billy, know ye not that Grace Drayton was the creator of the Campbell Kids? It's always easy to spot her work, because she had only one face for ny and all of her characters.

Hello Allan-
The term "Glad" for Easter was often seen as the fuller "Glad Easter Tidings", and once also, "Christmas Tidings". If you see late Victorian cards, not necessarilly of the Postal variety, the phrases have become commonly abrevieated to "Glad Easter" and "Christmas Tide". Perhaps moreso in British and Empire use.