Here's a rarity that ran only in the New York Herald-Tribune. We've talked about the H-T's filler strips on several occasions (here and here and here and here for instance). None ran every week, but rather only when ads dictated that a sixth-page slot was left open.

Sunday Morning Giggles is one of the last of the breed, and has the distinction of being the last new filler title to start in the H-T, though it is not the last to run; that distinction belongs to another Henry Boltinoff feature, Sergeant Fumble. Sunday Morning Giggles, a gag feature offering multiple yocks on a common subject, ran only three times between February 26 and October 7 1956.

Robotman, debuting on February 18 1985, was intended to be nothing more than a coldly calculated money-grubbing tie-in to a music-playing plush toy. Kenner got together with United Feature to do the cross-marketing strip with no goal in mind except to stimulate toy sales. But what they hadn't counted on was that in tapping young cartoonist Jim Meddick to draw the strip, they'd inadvertently created a spin-off that was far greater than the toy they were trying to hawk.

Robotman the toy came and went pretty quickly, a marketing scheme that quickly fizzled, but the Robotman strip was good enough to find a decent client list (though assuredly nowhere near the 250-paper debut they claimed). Meddick was eventually left alone by the corporate suits at Kenner and the strip blossomed. He reshaped the strip, dumped the silly robot with the heart emblem on its chest, and renamed the strip in honor of its new human star, Monty. He created memorable new characters like Fleshy the hairless cat, Monty's buddy Moondog, and my personal favorite, the spoiled rich kid Sedgwick Nuttingham III. The strip turned into something quite wonderful that has now endured and become the classic that it is today.

For more on Jim Meddick and Robotman, check out this interview from Hogan's Alley.

Above, the first week of dailies of Robotman, showing little hint of the great strip it would one day become.

Comments:
Hello Allan-
UFS originally urged Bill Waterson to include Robotman into a Clavin & Hobbes storyline, which he resisted, which lead to the decision to launch a seperate strip by Jim Meddick.
Meddich could finally ease Robotman from the strip and change it over to star his own character Monty in 2001, long after the Robotman toy was discontinued,a year after the Kenner Toys company was merged into oblivion, and one might guess, the Trade Mark for Robotman expired.

I'm a longtime fan of Robotman / Monty. Actually remember the early strips, and noting the edgier gags that were sneaking in (Robotman's romantic fixations on appliances, for example).

Robotman debris: Long ago I turned on the TV before work one morning, and instead of the usual syndicated cartoon series there was "Robotman & Friends", evidently an unsold series pilot. It felt like another Care Bears clone, surrounding Robotman with marketable robot buddies and syrupy cuteness (Hearts! Rainbows! Love!). The human characters were realistically drawn, and there was zero connection with the strip. All in all a typical DIC production.

You'll find it on YouTube broken into pieces. No better than what I remembered.

While poking around also found a Robotman & Friends Move and Match game on eBay, plus a references to a Robotman float in the 1985 Macy's Thanksgiving Parade. Since it looked like big money was being spent, one wonders that there wasn't more effort to pull everything together. Even Carl Barks's epic adventures stayed true to the design and character of Donald Duck, grounding him in what felt like the world seen in the animated shorts.

A Series that Never Was, or, The Perils of Microfilm Indexing

If you have my book, today's one of those days when you need to crack it open and do some surgery. It turns out that listing #5768, Smiling Tatters, needs to be stricken.

Why, you wonder? Well, this situation is another illustration of how even when you have the material right in front of you, errors can happen. I indexed the early McClure Syndicate sections based on the New York Press. I went through the paper on microfilm, which can be tough because Sunday comics are usually dark and muddy, making signatures (when they exist) hard or even impossible to read, and art-spotting prone to error for the same reason.

Compounding those problems is that back in those early days of newspaper comics there were lots of one-shots, which can muddy the waters as the researcher writes tons of notes just in case it turns out that what seems like a one-shot turns into a series. You record character names for all those one-shots just on the off-chance that the artist will decide to return to that character after all.

When you think you have a series, you still have the challenge that installments of it might pop up weeks or even months apart. Series strips in those days were rarely identifiable by a standard continuing title, but just by the recurrent characters therein. In other words, imagine the every time you open your current Sunday comics that Mutts isn't titled Mutts -- it varies every Sunday, with titles perhaps like "Mooch and Crabby Agree on One Thing," and "Summer Can't Get Here Too Soon for Earl", and so on. In order to identify the series, you look at art style and characters.

So, with all those excuses out of the way, here's an example of a situation in which I screwed up. On July 13 1902 I saw this strip, keeping in mind that I was seeing it on microfilm, not a scan from a tearsheet like this: 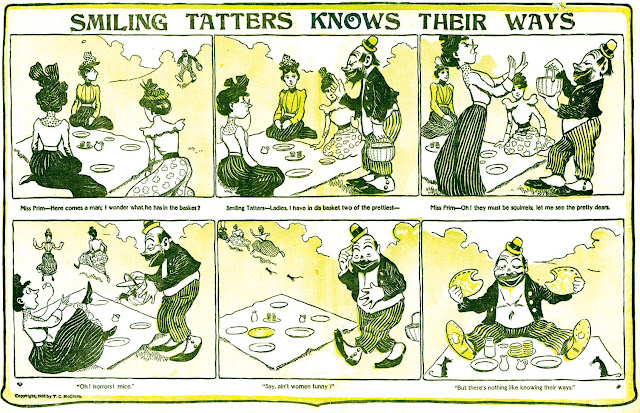 It was unsigned, and way back when I did this indexing I was somewhat less sure of myself at IDing art styles. I'm still not nearly as good as I'd like to be, but I now say with pretty good confidence that this is most likely the work of Ed Carey. Anyway, when I saw this on microfilm I saw a plausible beginning of a series starring a beggar names Smiling Tatters, and wrote it in my indexing notes.

Several reels of microfilm later, in the August 31 1902 New York Press I encountered this strip: 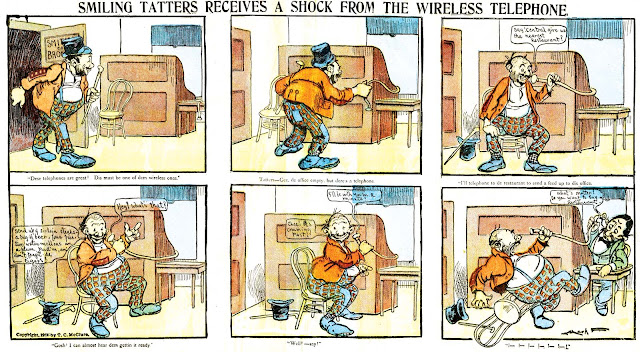 Not having a photographic memory I see this strip, note that I already had an index entry for Smiling Tatters, and think, hey, I've got a bona fide series! And bonus, this episode is initialed by Mark Fenderson, so now I know the creator. If I was looking at the two strips in good shape,  in colour, and right next to each other like this, I would have seen the obvious -- the characters are not designed the same (beyond being standard hobo types), and the art style is different, too. But short of engaging a second microfilm viewer, reloading the reel that had the other strip, and comparing them side by side, I was on my way down the yellow brick road.

An aside -- character names for certain types were used over and over, making this sort of error all too easy. Half the kids in comics in those days were named Willie, the cops were mostly Clancys, and hoboes, who were exceedingly popular subjects, were very often Tatters or Waggles. But they threw me a real curveball on this one, adding the adjective 'Smiling' to really seal the deal on me makng an error.

Now that I thought I had a series, I compunded my error by finding another 'Tatters' strip many reels later, on November 23 1902 (sorry, this one I can only show from digitized microfilm): 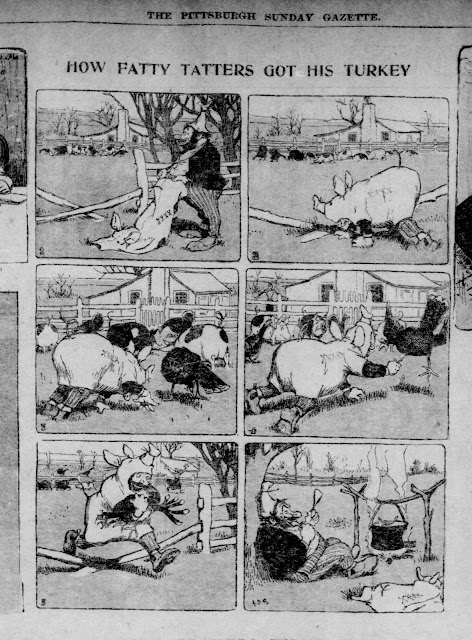 Here I really went off the rails, thinking apparently that, well, 'Fatty', 'Smiling', whatever, probably the same hobo, since he has the same name, right? And he does seem to be a happy, smiling fellow to boot. Getting stuck on requiring perfect consistency from these early cartoonists can land you in just as much hot water as the opposite can. Also, on the microfilm I was indexing those initials in the last panel could very well have been much more obscure and led me to assume they were Fenderson's again. With this version I can see pretty clearly that who we really have here is A.D. Reed, yet another McClure artist! I do have trouble distinguishing between Reed and Fenderson, whose styles are not so distinctively different to me. So what a relief that they both signed their respective strips since they were notorious for not bothering to take credit on their work.

Anyway, all those mea culpas out of the way, take the trusty old marker out and make a great big 'X' through listing #5768!

Comments:
Hello Allan-
Allow me to play Beelzebub's Perry Mason; Could this not still be considered a series, as they are of the same syndicate? Some titles are started by one artist and carried on by another. Even though this lasted only two, or maybe 2½ times, is'nt that technically a series?

Okay, Satan's consigliere, if I consider anything from a syndicate with the same character name to be a series then we're in hip-deep guano. By that token, any Hearst comic strip with a kid named Jimmy is now fused at the hip joint with Mr. Swinnerton's magnum opus?

Your point is well taken, though. If those two and a half hoboes shared more than a happy expression on their faces -- something that signalled that they were supposed to be a running character and not just named as the product of cartoonist laziness, I'd be on board.

Wish You Were Here, from Hans Horina 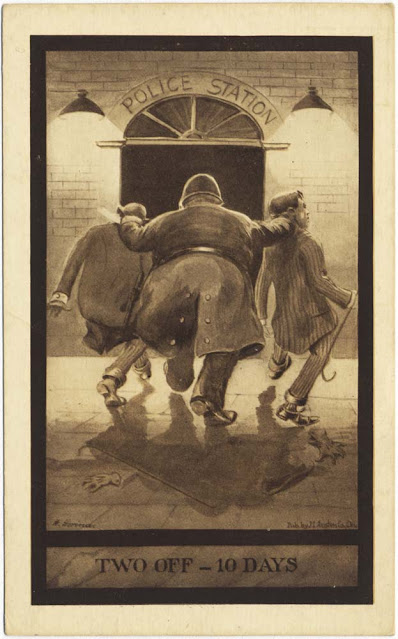 This is card A271 from Hans Horina's series done for the J.I. Austen Company of Chicago. I must confess that whatever humour is supposed to be found here eludes me. I'm guessing this is a play on some bit of period slang.

I am presently working on PhD piece regarding the use of comic art in education. Would you be interested in discussing this and answers some questions on the matter? Am based in Dublin, Ireland (Jolienhampson@yahoo.co.uk)

It sounds like something you'd find in a newspaper sports story, two men will be out for ten days for injuries.