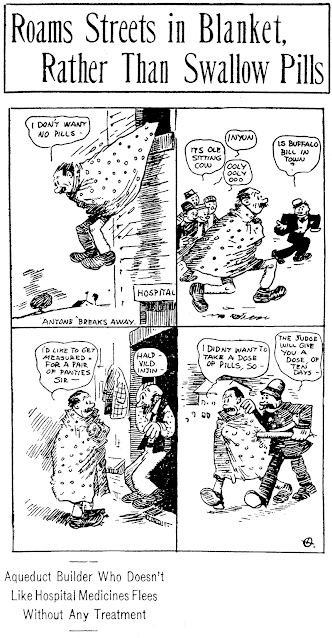 March 27 1910 -- Anton Kunich has been treated for several days at the LA County Hospital. He finally decided that they were quacks and he wasn't going to take any more of their prescribed medicines. Fearing that he would be forced to undergo medical treatment he didn't want, Kunich ran away from the hospital. Only problem was that he couldn't find his clothes, so clad only in a hospital blanket he did not exactly succeed in blending in with the crowd. Mr Kunich did successfully escape the hospital, but landed himself in jail on a public indecency charge.

Obscurity of the Day: Izzy the Iceman

I don't know if the Philadelphia Evening Telegraph went through only a short flirtation with in-house comics, but for some reason I only have an index of their series from 1904. Maybe they didn't do anything interesting except in that single year, or else my research is incomplete. My notes fail to tell me whether the microfilm for other years wasn't available at the Philadelphia Free Library (just about the only library to have more than a reel or two of this paper), or if I ran out of time when in Philly and only managed to look at that single year.

So anyway, here's one of their weekday series from 1904, called Izzy the Ice Man. It's a perfectly fine little strip about the travails of an iceman who can't seem to deliver H2O in solid form.  It ran a handful of times from July 5 to August 11 1904.

The strip was signed with the name Bill Nye. But the Bill Nye was a very famous humorist who died in 1900, so whoever appropriated his name at the Telegraph had quite the cheek to use the name. Even if the fellow's name was actually Bill Nye, he could have gone by Will, or Billy, right? Anyway, this Bill Nye was responsible for working on no less than seven series for the Telegraph in 1904, and while his work isn't virtuoso level, it's pretty darn good for a guy who disappeared without a trace.

Comments:
The Bill Nye wrote one of my favorite jokes in a piece on a western outlaw: "He killed an awful lot of people, considering he wasn't a doctor."

I'm reading a book called American Cornball by Christopher Miller, which is about topics which were once subjects for humor, at least more so than they are now.

There is a section on icemen, who "inspired a lot of raunchy male humor" because they were generally big, strong men who regularly entered women's homes during the day (to drop off a big block of ice in the icebox) when their husbands were at work.

For whatever reason, Bill Nye seems not to have gone anywhere near that subject, at least based on the samples here. 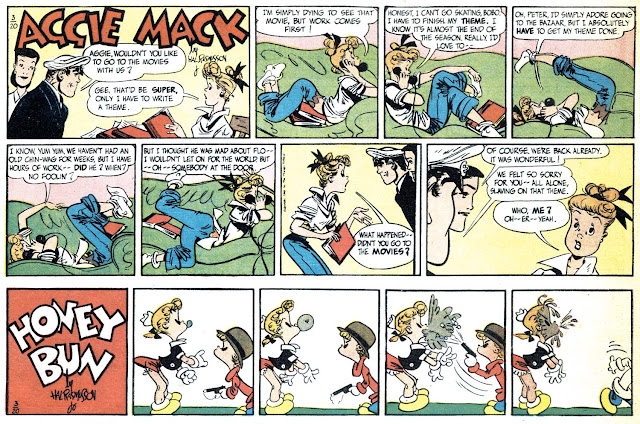 Aggie Mack was a long-running teen girl strip mostly memorable for the sumptuous brushwork of Hal Rasmussen. Especially earlier in the series, as above, Rasmussen's command of line and anatomy, and the playfulness of his posing, makes what would have otherwise been just a me-too sort of affair into a memorable and successful strip.

Aggie Mack debuted in 1946, after the heyday of the toppers, but they were still often thrown in so that a feature could be simply and easily converted from a half to a third page format. The seldom seen topper for Aggie Mack was Honey Bun, which basically starred a pre-teen version of Aggie herslf. As best I can figure out, the Honey Bun character never appeared in the main strip. Rasmussen employed a slightly modified style for the topper, giving it more the look of classic animation. It was as well done as the main strip, though, and I feel sorry for readers who seldom got to see it. Even though the topper was included with the half-page, tab page, and half-tab formats, nearly every paper used the third page, the only format that eliminated it.

Honey Bun started along with the Aggie Mack Sunday on September 15 1946.  The latest sample I have that includes the topper is one from 1960, but it may well have gone on longer. Aggie Mack ran until 1972, and it is possible that the topper was offered until the end. Can anyone find samples later thatn 1960?

For some more great examples of Hal Rasmussen's art, check out John K's blog where he offers samples from a scarce art instruction book by Rasmussen. In John K's words, "he draws pretty girls like a sonuvabitch."

Obscurity of the Day: Grandpa's Story 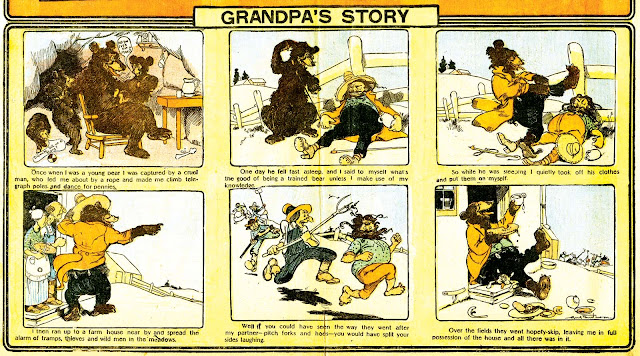 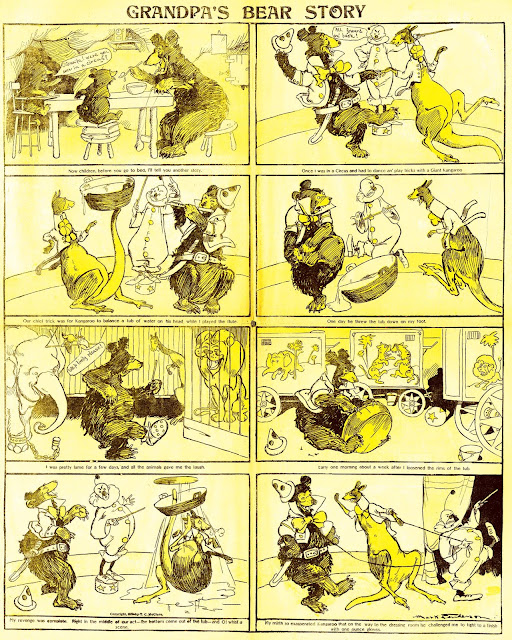 Grandpa's Story by Mark Fenderson ran three times, on February 2, 16 and 23rd 1902* (first and last shown above). It offers a slightly out of the ordinary perspective on animal strips, starring a bear who tells tales of his younger exploits to the grandkids.

I'd wonder why Fenderson didn't stick with this series longer, but not only were long running series uncommon in these early comics sections, but Fenderson in particular didn't seem to like to tie himself down to the same idea each week. Nonetheless, I think in this case there was a richer vein to mine in Grandpa's Story, and it's too bad Fenderson dropped it after a mere three episodes.

Comments:
These are wonderful! Too bad, indeed, that he did so few. By the way, may we see the third one? This strip has huge potential, which is, alas, forever untapped. I wish I'd thought of it myself.

Wish You Were Here, from Carl "Bunny" Schultze 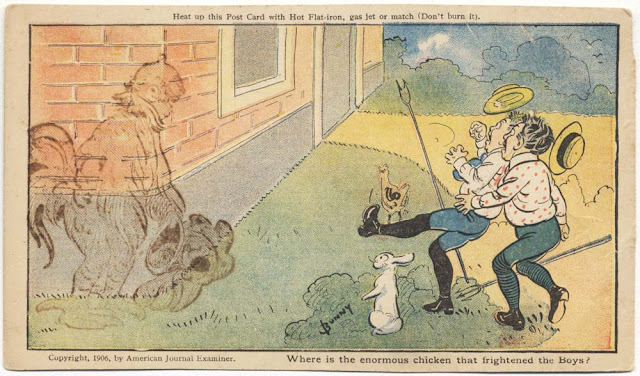 Another entry from the 1906 Little Arsonist series of Hearst freebie cards, this one featuring the characters from Foxy Grandpa. This one at least holds a slight surprise for the flatiron wielding kids, who might not immediately guess that an "enormous chicken" could be Grandpa.

Comments:
Hello Allan-
This is the first card I've seen where it would seem a mistake, albeit a subtle one, is made. Obviously the figure to be revealed is actually a seperate drawing, to be superimposed on the background, printed in the wax or chemical that is used for ink. But here, the Grandpa figure isn't a perfect fit.
Notice the gaze of the boys don't align with the sight they behold, they are looking above him. You'll also note they are nearly the same size as he is, not as we see in the strip.
My guess is that the Foxy figure was, though the correct size to match the boys, was somehow shrunk a bit by an art editor.