March 29 1910 -- If there's anything that can knock the upcoming Battle of the Century off the top of the sports page, it is that magical day in which baseball comes home to roost for a new season. Herriman offers a page-wide cartoon depicting a parade of Los Angeles notables, real and fictional, all heading for opening day.

Fixed, thanks for reporting.

Leave the Blog This Minute!

No, no, not forever please!

But in those forlorn moments of your day when you are not happily and profitably passing the time here on Stripper's Guide, there is after all a whole world out there. And yes, I realize that 90% of it, as Sturgeon's Law tells us, is doo-doo. But today I must tell you about something that is not just within that 10% of the world that is worthwhile, but in that 0.5% that is downright sublime.

In the few moments of my life when I don't have my nose to the grindstone producing endless blog posts here, I stumbled across a Youtube channel run by a fellow named Pete Beard. Mr. Beard is an historian of illustration art who has produced an incredible and prodigious number of beautifully crafted videos about great illustrators.

Mr. Beard has a special fondness for obscure and utterly forgotten illustrators, and has produced over 70 different videos just on the subject of what he calls "Unsung Heroes of Illustration". Since these videos generally cover four illustrators each, that's around 300 different illustrators rescued from the realms of obscurity! Mr. Beard's taste is not just eclectic but well-honed -- the illustrators he discusses are for the most part unknown to me, but their obscurity is most definitely undeserved -- the quality of the work is jaw-droppingly wonderful. How the artists of these works could be anything less than celebrated names is a mystery to me.

Here are a few samples you can try, and I'll be surprised if you're not hooked and wanting many more:

The Art of Illustration, Part I

Comments:
I watched the first of his videos yesterday and greatly enjoyed it. Thank you for the good recommendation.

Thanks so much for the recommendation of Beard's marvelous videos. They are a revelation!

From The Stacks: Teddy in Africa - From Teddy's Diary 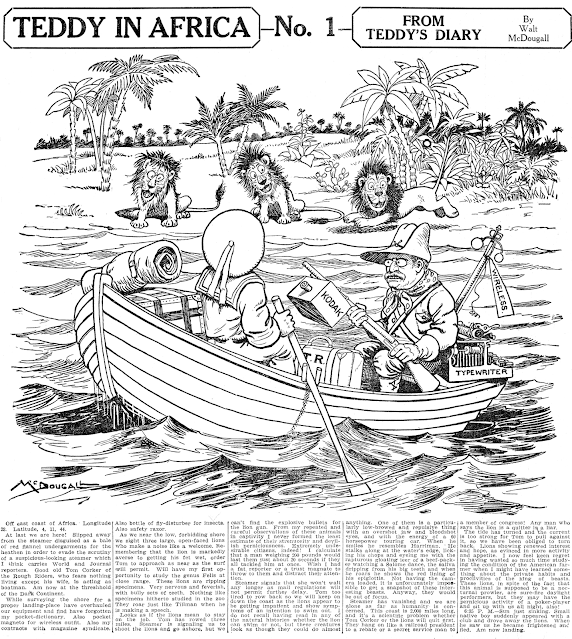 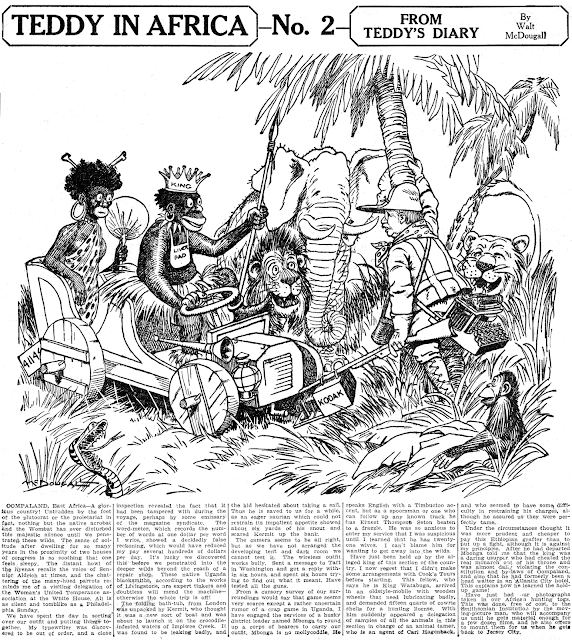 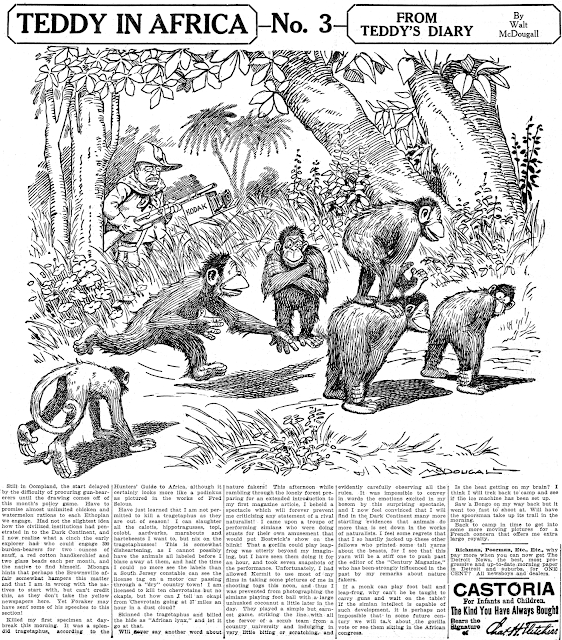 You won't find the series Teddy in Africa in my book because it is too text-heavy to qualify,  but Walt McDougall's series is certainly worth a look here on the blog. Since it bubbled up to the top of the stacks, I present the first three episodes of the series, which ran in 1909 coinciding with the beginning of ex-president Teddy Roosevelt's actual safari/scientific expedition in Africa. Teddy was both a naturalist and a hunter, which he didn't consider to be a logical inconsistency. Because of my admiration of the man on other fronts, I'll not go any further down that rabbit hole.

I can document at least 27 episodes of this series, which seems to have been issued to run about every 2-3 days. It was self-syndicated by McDougall, who had recently left the Philadelphia North American. He tried self-syndicating a few of these series that combine a large panel cartoon or two with lengthy text stories. McDougall mentions this series in his autobiography, saying that he felt it didn't do well because newspaper readers objected to his satirization of T.R. I have to disagree; we all know that T.R., no matter how much we love him, practically begged to be caricatured, and many cartoonists of the 1900s can thank him and his pince-nez for some portion of their paychecks. No, I think that T.R. was so close to being a caricature of himself that McDougall's comedic diary might well have had newspaper readers confused about whether they were reading fiction or fact. 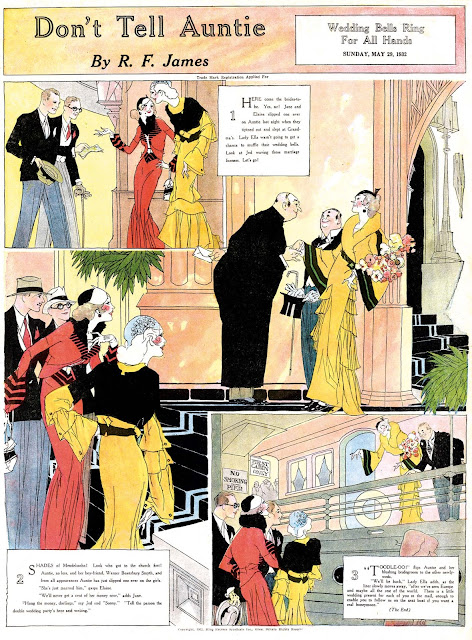 So far we've only covered one other R.F. James magazine cover series here, Let's Run Away, way back in 2010. At the time I remarked on how similar his style was to Russell Patterson's, but I tempered that with the observation that James had a thing-for doll-like white faces for his girls. Finally we have another of his series, Don't Tell Auntie, and yes, those cadaver-esque doll faces seem to be a consistent feature of his work.

Don't Tell Auntie concerns a pair of bratty sisters who try to convince their very rich and strait-laced  aunt that they should inherit her considerable dough. But the young debs have little willpower when it comes to parties, men, smoking, drinking, and just about any other vice you care to name, and thus constantly get in dutch with the dowager. Lots of silly shenanigans ensue in this 16-episode series, but you needn't wonder what happens in the end because the concluding episode is right here above.

Don't Tell Auntie ran from March 13 to May 29 1932 in the Hearst magazine cover series that was in the midst of switching from the Newspaper Feature Service to King Features. 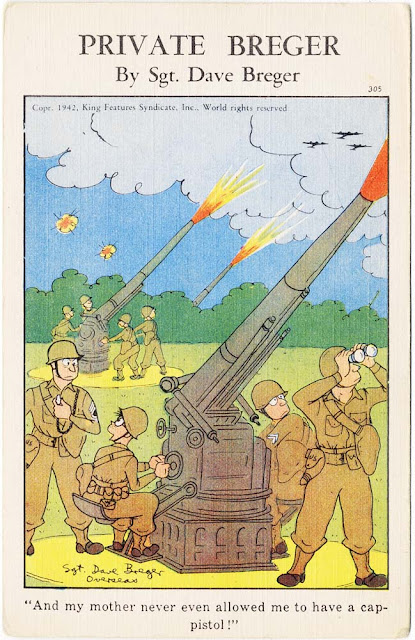 Here's another Private Breger postcard, issued in the war years and simply re-using panels from the newspaper series. Interesting wrinkle here is that my previous Private Breger cards have come from a company called Graycraft, while this and others I turned up recently are from Tichnor. Despite different manufacturer names, they seem to follow the same series numbering. This one is #305 on the front, and "General Comics 66033" on the reverse.

Comments:
Probably the Tichnor company bought out the Graycraft company, or sublicensed their already-prepared masters to bang out their reprints. This could be because Tichnor operated in territory that Graycraft did not, so they wouldn't compete.