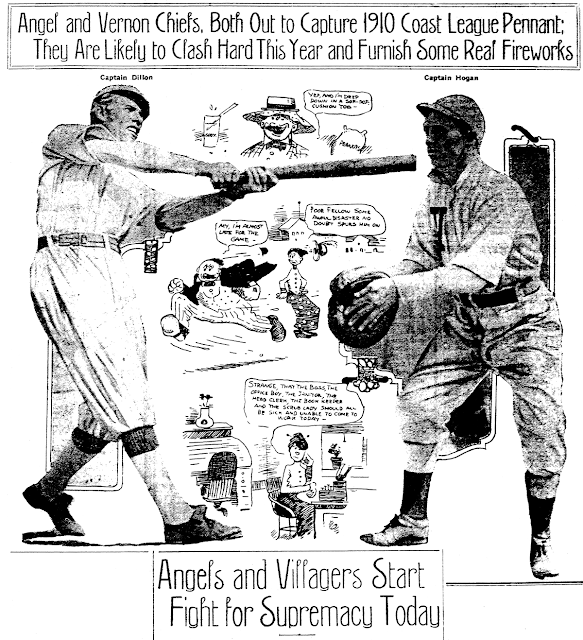 March 30 1910 -- Herriman continues to herald the new baseball season, this time supplying sketches of deliriously happy fans to go along with team captain photos.  They are Pop Dillon of the Angels and Wallace Hogan of the Vernon Tigers (here referred to as the Chiefs and the Villagers, presumably nicknames).

Since Herriman will be moving to New York long before the conclusion of the 1910 season, I'll just come out and tell you that neither team will comport itself particularly well. Team batting averages were severely anemic, keeping relatively decent pitching from putting big numbers in the win columns. Vernon will at least be able to boast a barely winning season, while the Angels will post a season they'll gladly forget, beating only the pathetic Sacramento Seals to stay out of the basement.

William “Will” Vincent Lawler was born on January 12, 1876, in New York, New York. His full name and birth date are from his World War I draft card, however his Social Security application has the day as 14. The Herald Statesman (Yonkers, New York), September 7, 1945, said Lawler’s birthplace was New York City.

The 1880 U.S. Federal Census recorded Lawler as the second of four children born to Thomas, an Irishman and waiter, and Catherine, a Scotswoman. The family resided in Manhattan at 126 Mott Street.

The Herald Statesman said Lawler “was educated in parochial and public schools in New York City.” Information about his art training was not mentioned.

According to the 1900 census, artist Lawler lived with his parents and four siblings in Manhattan at 1668 Second Avenue. His father was a policeman. Lawler was at the same address in the 1905 New York state census.

American Newspaper Comics (2012) said Richard Fenton Outcault created the series Buster Brown, in 1902, for the New York Herald. When Outcault left the Herald, at the end of 1905, he took Buster Brown to Hearst. A court battle decided the Buster Brown series title was owned by the Herald. A number of ghost artists and writers produced Buster Brown from 1906 to January 1911. The Editor & Publisher, September 29, 1928, identified Lawler as one of the artists, “For many years two ‘Buster Browns,’ drawn by different artists, appeared in American newspapers. William Lawler drew the Herald’s ‘Buster Brown’ for many years.”

Lawler has not yet been found in the 1910 census. The Herald Statesman said Lawler was a Yonkers resident beginning in 1909. Yonkers city directories for 1911 and 1912 listed Lawler, a cartoonist, at 38 Randolph. The following year he was at 110 Saratoga Avenue. From 1914 into the early 1930s, Lawler’s address 112 Saratoga Avenue.

The comic artist of today is a power in newspaperdom and in most cases is paid well, and in some handsomely, because his work when good is what attracts readers and readers make circulation. His work not only appears in the paper that pays him his salary but is syndicated in many papers throughout the United States, thus enabling the publisher to not only pay the artists good salaries but also make a profit on their labor.

On September 12, 1918, Lawler signed his World War I draft card. His occupation was advertising cartoonist who had an office at 159 Sixth Avenue in Manhattan. His description was tall, medium build with gray eyes and dark hair.

According to the 1940 census Lawler was a artist with the World Telegram. He was a Yonkers resident at 118 Saratoga Avenue. His highest level of education was the eighth grade.

Lawler passed away September 6, 1945 at his home in Yonkers. The Herald Statesman said he “was formerly a cartoonist for the old New York World, New York Herald and Globe.”

Obscurity of the Day: Sisters of Eve 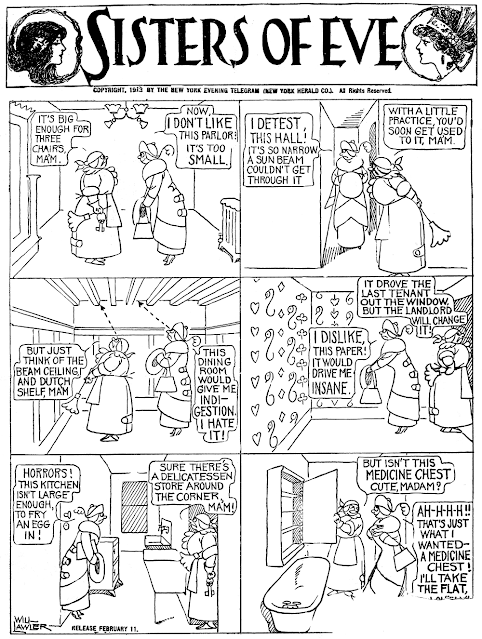 If the name Will Lawler sparks any memories for you, it is pretty certain that you think of him as the poor guy who laboured in anonymity at the New York Herald as the ghost-artist of the "original" Buster Brown.

When R.F. Outcault was wooed away by Hearst in late 1905, the New York Herald retained naming rights for the Buster Brown strip. Outcault could take his character to the New York American, but he was not allowed to use his star's name as the title of the strip. So, just like a decade earlier when Hearst hired Outcault away once before from Pulitzer, the original paper was considered to be free to continue the original strip (in that case Hogan's Alley), while the new paper was allowed to continue using the original characters, but not the original titles.

So in 1906 when Buster Brown (the character) became a Hearst strip, the New York Herald was left with a title but no cartoonist. After several months of trying out various cartoonists on the strip, they settled on Will Lawler. Lawler has no earlier cartooning credits of which I'm aware, so this gig may have been his first high-profile newspaper art job -- but it was also anonymous. He did a perfectly creditable job of aping the atmosphere and look of Outcault's strip, and the "original" Buster Brown lasted another five years in the Herald under his able stewardship. I can certainly imagine that he must have chafed at being incognito while producing the further adventures of one of the most popular of comic strip characters.

Once Lawler's meal ticket had petered out, the Herald strangely seemed to have little interest in offering him a chance at another strip. It isn't until two years later that Lawler reappears in the comic strip realm, this time producing a couple of pretty forgettable weekday strips for the Herald's minor-league evening newspaper, the Evening Telegram. One was Discord in 'A' Flat, the other is our obscurity today, Sisters of Eve.

Sisters of Eve is a perfectly okay comic strip, offering the familiar twitting of female flightiness that working stiffs riding home on the evening train would enjoy. What is strange, and almost creepy, is that Lawler, now free of the shackles of copying Outcault, produced a strip in which the masthead is done in his old familiar Outcault style, and the strip itself is a blatant copy of T.E. Powers' style.

I'm torn between feeling sorry for Lawler and wanting to admonish him for wasting his chance to let his own star shine. Maybe Lawler was just one of those artists who never gets to the point of evolving their own style -- maybe all he could do was copy the styles of others?

In any case, the pair of weekday strips produced by Lawler for the Evening Telegram ran for a little over a year -- not an insubstantial amount of time for a weekday strip of those days. But his work obviously did not become any sort of draw and when these strips ended, Lawler produced nothing further in the comic strip line. Sisters Of Eve ran from December 26 1912 to February 13 1914.

PS -- To make a longish post even longer, I want to mention the origin of the sample above -- the only hardcopy sample of have of this strip. It was found on the reverse of 1913 correspondence from a New York real estate brokerage firm. According to a note on the bottom of the sheet, they liked the cartoon so much that they had bought the rights to reproduce it on their stationery! Evidently the Evening Telegram had supplied them with a syndicate proof sheet of the strip, because you'll notice in the next to last panel the typeset text "RELEASE FEBRUARY 11".

Was there something in the water in the spring of 1913? Seems like. From The Fourth Estate, a trio of articles denouncing the Sunday color comics section:

Cyrus H. K. Curtis, publisher of the Philadelphia Public Ledger, has discontinued the use of the Sunday comic supplement in his newspaper. This section had been a Sunday feature with this newspaper for many years. Recently the Philadelphia Ministers’ Association requested Mr. Curtis to stop his Sunday edition entirely, but that Mr. Curtis refused to do. His relinquishment of the comic section, it is thought, in a way comes from the objections of the ministers.

As noted in The Fourth Estate last week the Philadelphia Public Ledger has discontinued its Sunday comic supplement. Its reason is given in the following statement by its publishers:

“It was concluded that the subject matter and treatment of the comic illustrated serials exercise a
mischievous influence on boys and girls and have demoralizing tendencies. This step was taken in full realization of the fact that these supplements are supposed to have large circulation value.

“The Public Ledger believes, however, that the substitution of other features of superior quality will have more worthy appeal to the intelligence and good taste of the great mass of its readers. It is the
province of a newspaper to undertake to inculcate in its readers appreciation of what is elevating and
artistic, rather than merely to seekvpopularity, and not to encouragevthe circulation of pictorial or othervmatter, the popularity of which isvdue more to the obviousness of itsvappeal than to any inherent meritvof its own.

“The Public Ledger is replacingvthe comic with other features thatvwill have equal interest as well as
superior value. It intends to eliminate journalistic “vaudeville’ andvsubstitute therefore something more in keeping with the higher purpose of an enlightened newspaper.”

Addressing the members of the International Kindergarten Union in Washington, D. C., Miss Anne
Moore of New York City denounced the comic Sunday supplement as injurious to the minds of children.

“The kindergarten must overcome the deleterious influence of the Sunday comic supplement,” she
said. ‘The pictures are in most cases not funny, and the humor that they depict makes an impression on the mind of the child that is not the best thing for the child at a tender age. The portrayal of practical jokes, and the picturing of scenes which appear to the older mind as funny, work harm on a child when imitation is its psychological tendency.

Miss Moore recommended that in place of the comic supplements there should be established for the use of school children a series of weekly color pictures, to be distributed throughout the schools, to be of a wholesome character and appeal to children without teaching them practical jokes.

Comments:
Hello Alan-
Was there some sort of movement aloft to get rid of comics? I believe the St. Louis Star (after all it went through) dropped their Sunday section at about this time, only to bring it back in 1921. 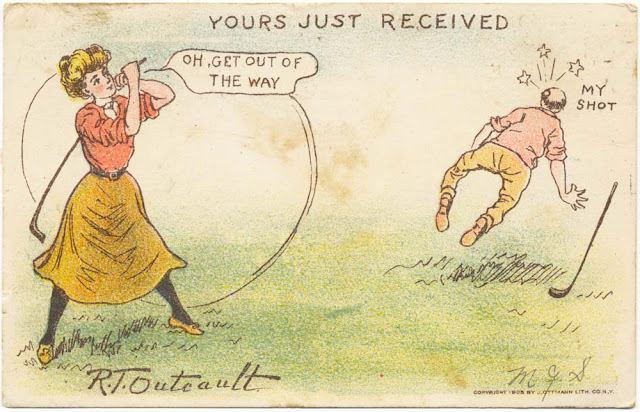 Here's a 1905 card by Outcault for the J. Ottmann company. As wordy as Outcault could be, I've generally found that he is only verbose in service to humour; here the three bits of text all sort of collide into a gag-mess that is unusual for him. In my humble opinion, "Yours Just Received" alone offers us a good gag, and is ruined by all the extraneous bits.

Comments:
Hello Allan-
At least there weren't a plethora of signs, plaques and wiseacre kibitzing animals to contribute as well.