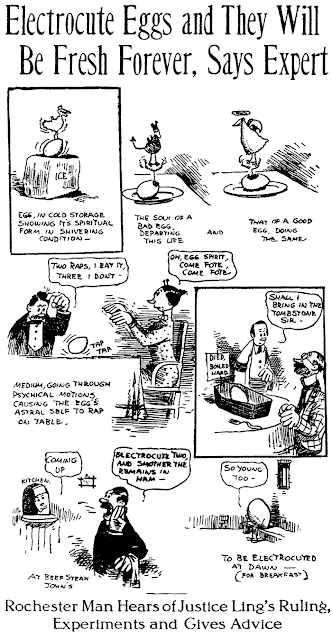 April 9 1910 -- Justice Ling of California has become the go-to guy regarding the freshness of chicken eggs. A short while before this cartoon ran there was a lawsuit between a grocer and an egg supplier regarding the freshness of the eggs they were offering. The shipment of eggs in question, dubbed "fancy fresh eggs", were found to have been laid over two months before in South Dakota before being shipped to California and arriving at the grocer's business.

So is a 2+ month old, very well traveled, but always chilled, egg fresh? That was the question put to Justice Ling. After a great deal of research and expert opinions sought, Ling decided to throw the suit out of court, even though he agreed that the supplier was surely stretching the bounds of "fresh". He decided that candling the eggs is the most foolproof method of determining freshness, and that's what the grocer should have done before accepting the shipment. Solomonic? Pretty darn close, I'd say.

So I had to say all that to explain this cartoon, which is a follow-up to that legal drama. An inventor is now seeking Justice Ling's attention, because he claims to have a method for keeping eggs fresh almost indefinitely. He proclaims that the wonder of the age, electricity, is the key. An electric shock to the egg, to kill the forming chick inside, will keep the contents of the egg from degrading.

Unfortunately, neither Justice Ling nor common sense will propel our inventor to hobnob with the likes of Edison and Marconi. It seems not to have occurred to him that the vast majority of hen fruit are unfertilized because wholesale egg producers don't keep roosters around, considering them a waste of space and feed. And yet, those eggs still degrade, don't they? And even if they are fertilized, the chicken inside will not develop unless the temperature is kept at about 100 degrees Fahrenheit, a very unlikely temperature at which eggs will be stored.

Obscurity of the Day: Some Monkey Fun from Jungle Jinks 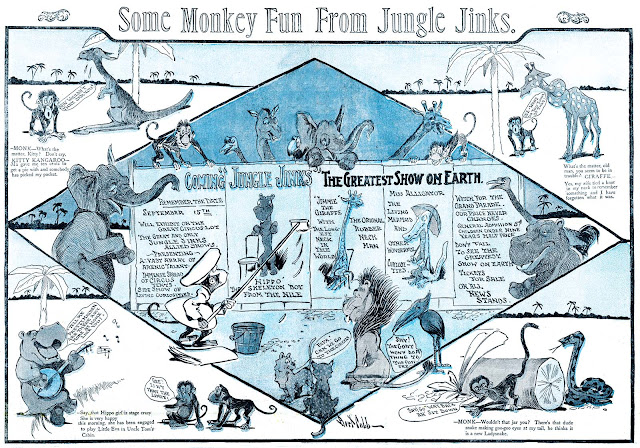 Bert Cobb was a wonderful illustrator/artist/cartoonist, so I bet that's why he rarely took the time to establish a long-running series -- he was always getting offers of work and off he went, hopping from job to job. Out of seven known newspaper series the longest-running one he did, Ambitious Teddy, ran a paltry eight months; it was also his last.

Cobb spent a short time penning material for the McClure Syndicate's newly minted color comics section in 1901. One of his two continuing series was Some Monkey Fun from Jungle Jinks, another one of those jungle animal series. In the first decade of the newspaper color comics section, these things were ubiquitous, easily rivalling the prank-pulling kid strips for popularity.

This ungainly titled series ran from August 25 to October 13 1901*, appearing just four times in that period. 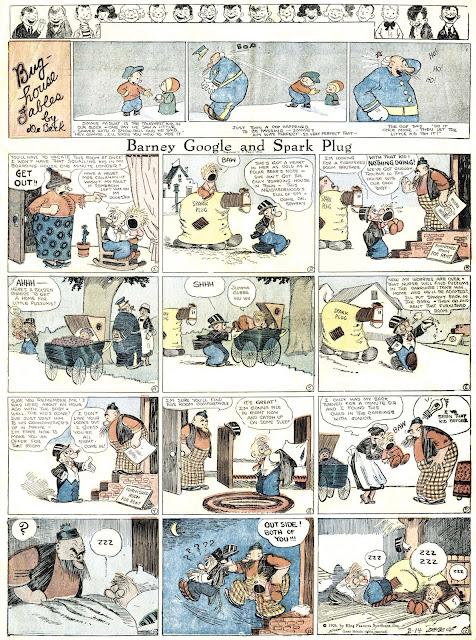 At the beginning of 1926, when the Hearst syndicates decreed that all their Sunday pages would add topper strips, almost all the cartoonists started off with a topper series that was short-lived, and then, after a few months, they came up with series that would run for years. I have no idea why that was, but you can pick pretty much any Hearst Sunday page and you'll see the pattern.

Barney Google is a perfect exemplar of that pattern. Before he settled on the long-running classic topper Parlor, Bedroom and Sink (later Bunky), DeBeck began with a one-shot on January 10 1926 titled Useless. The next week DeBeck decided to inaugurate a Sunday version of his daily panel Bughouse Fables, a feature he'd been doing since 1920. I can certainly imagine DeBeck had a store of ideas for the feature that couldn't really work in the panel format, so a strip version allowed him to use up those otherwise unworkable ideas.

Bughouse Fables was a delightfully wacky feature in which people would react in unexpected ways to situations. The topper strip above is a perfect example. We're all ready for the cop to go ballistic, and the gag is that he goes the opposite way.

Although adapting Bughouse Fables as a topper seems like a great solution to needing an extra feature, DeBeck, like most of the Hearst cartoonists, didn't stick with his first series. The Bughouse Fables topper ended on May 9 1926, replaced by Parlor, Bedroom and Sink.

Obscurity of the Day: Cy! 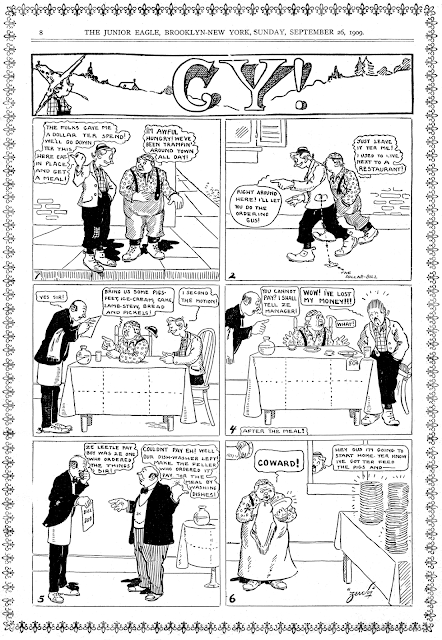 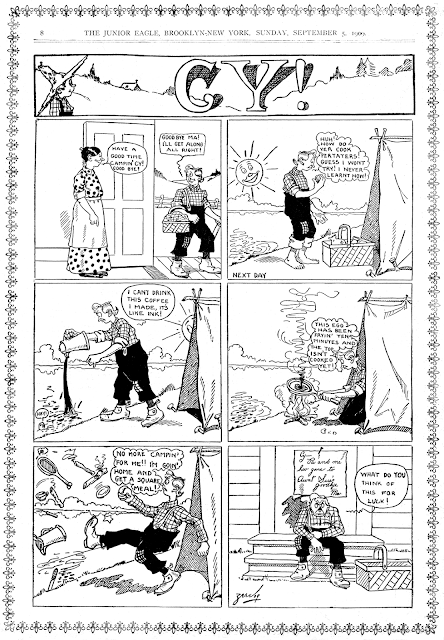 Alfred G. Alblitzer simplified his cartooning nom de plume to Al Zere, but I have to say, I really like the alliteration in his given name. I wonder if, in the way that a flap of a butterfly's wing can change history, could a cartoonist named Alfred Alblitzer have had a different biography just because of his name.

Well, we'll never know the answer to that one. But we do have an answer to the burning question, "What did Al Zere produce at the Brooklyn Eagle from August 30 1908 to December 19 1909?" The answer is today's obscurity, called Cy! (don't forget the exclamation point!!)

The Brooklyn Eagle offered only one Sunday comic each week during this early era, and Al Zere created Cy! as his second attempt to take up permanent residence on that very exclusive stage. It would be on his third try that he'd stick the landing with Buttons and Fatty, which he penned for nine years before being called off to visit Europe's finest trenches, rifle and Army boots provided gratis.

Zere's Cy! fails to live up the exclamation point, offering serviceable but unmemorable gags about a kid named (wait for it) Cy. I think he's supposed to be a country bumpkin -- those big clodhopper shoes and patched jeans are telltales -- but the gags don't often seem to have much to do with that. I don't see it as emblematic of the country bumpkin type that our young man goes camping and to fancy restaurants as seen above. Don't bumpkins chase pigs and smoke corn silk behind the barn? Maybe Al Zere, a Brooklynite born and bred, had a little trouble visulaizing country life, but jeez, he could have stolen gags from only about a million other similar features.

Anyhow, the good citizens of Brooklyn would have to suffer through Cy! (don't forget the exclamation point!) for almost a year and a half before Zere put him out to pasture. Or, to keep in the spirit of things, perhaps in the harbour wearing concrete overshoes? 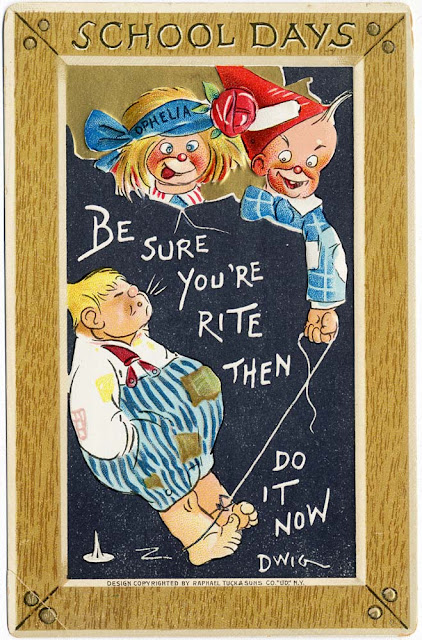 Here's another Dwig "School Days" card, issued by Raphael Tuck. The oddity with this one is that it is marked as Series 49 on the reverse, while my other cards of this type are from Series 110. Thank goodness I don't really care to delve too far into postcard history, or I'd be off on a research expedition now!