April 22 1910 -- With Halley's Comet all over the news, cartoonists suddenly see comets as metaphors for just about everything, Here Herriman offers us Jim Jeffries as the comet, Jack Johnson and friend as stargazers.

Obscurity of the Day: Little Folk of Murray Hill 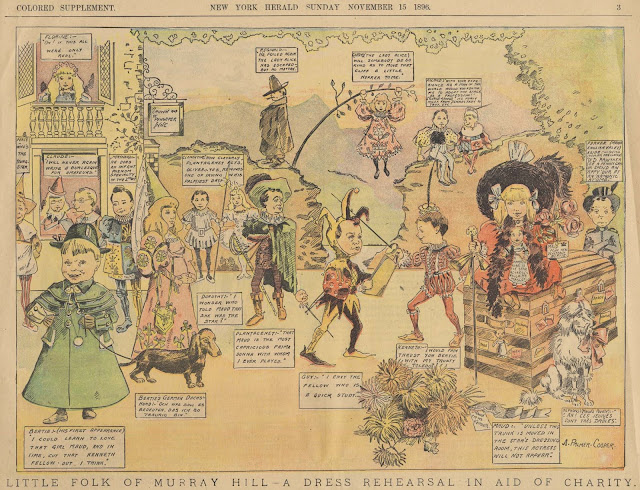 When Pulitzer's New York World made a sensation with Outcault's Yellow Kid, others wanted to get into the act. At the staid and highbrow New York Herald, a cartoonist with the wonderful name of Astley Palmer-Cooper came up with the totally original idea of having a big group of kids from the affluent Murray Hill neighbourhood all in a big one panel cartoon, brim full of bits of comedic business going on. He came up with a sort of mascot character named Bertie who wore a bicorn hat and bright green (not yellow!) fur-collared cloak, and his objet d'amour, Maud, had a vaguely Asian-looking doll which communicated sentiments via lettering on its nightgown (also not yellow!).

To all this creativity Mr. Palmer-Cooper added his not particularly impressive cartooning chops and questionable gagwriting ability. Granted, a hundred and twenty some years later something may get lost in the translation, but I find it hard to discern if most of the characters' utterances are even intended to be funny. They seem to have the structural architecture of gags, but I'll be darned if I can focus in on what's actually supposed to be funny about what they're saying. If the series had been long-running I'd chalk it up to me not being sufficiently familiar with these characters, and you have to know their personalities to get the gags. But the sample above is only the second installment of the series, so that ain't it.

The odd Yellow Kid knockoff Little Folk of Murray Hill only ran for a very short time; it debuted on November 8 1896, and the latest I know it ran is November 29; but it may have run into December. Apparently it is missing from the New York Herald microfilm that Ken Barker used to create his index of that paper, since it does not appear in his list at all.

Here's what I know about Astley Palmer-Cooper: He was born in England and emigrated to the U.S. in 1888 at the age of 20. He worked for awhile at the Philadelphia Inquirer and Baltimore Herald in addition to the New York Herald (probably freelance in that case). In 1897 he moved to Asheville North Carolina because of health issues, but died of them in August 1898 at age 30, leaving a widow and three kids.

Comments:
Hello Allan-
This really is pretty weak stuff, but I guess as we're really at the crack of dawn in comics history, anything was good enough. Mr. Cooper seems to favour giving characters the tight, glassy stare of one about to puke.
The doll is definately Asian, Its yellow-kidesque message conveying garment rather bluntly tells us it's a Kobe Doll, and it is the girl's "mascot". I don't see why an explanation was needed; but most of the rest of the little signs that tell us what the characters say (apparently word balloons weren't an established standard yet)include splashes from their consciousness streams rather than jokes. I guess calling a blade a "Toledo" is supposed to be a sample of Cooper's rapier wit. Ouch!

In doing a quick online newspaper search, I find that A. Palmer Cooper had a sort of minor celebrity, especially in the Baltimore area.
Apparently we was known as a onetime Colorado cowboy. He did lectures and drawing exhibitions, often while telling western stories. He co-wrote a play titled "Esau" in 1895, designed the costumes for a show called "Bluff King Hal" (1896),wrote short stories for newspaper syndication like "Miss Waxter's Missionary Cats" (1896), did book illustrations like "The Ballad of La Jeunesse Doree" by Martha Cunningham,(1895) a collection of poetry published in Baltimore.
According to an obit in the Philadelphia Inquirer (1 Sept. 1898), He was the grandson of an eminent physician, Sir Astley Cooper, and was a schoolmate of Rudyard Kipling.
He was popular and busy, but in all this, he still doesn't rise past mediocrity to my jaded pallette.

I have to wonder if this is some sort of promotional tie-in to a local theatre production, possibly around Christmas. I can’t tell what exactly the production might be, Shakespeare or otherwise. I tried digging around to see if something jumps out, but I came up empty handed. Maybe there are further clues in the other comics from this series? Or maybe not!

For the 1990 survey we lost one more paper, the Daily Register (Red Bank, NJ) in late January became a weekly so we will no longer be able to count this paper. The total papers for this year’s survey is 269 papers.

The end of Bloom County caused a lot of movement in the Top 30. Calvin & Hobbes moves up 5 places from 11 to 6. For Better or For Worse moves from 13 to 10 and Cathy moves from 18 to 15 and joins the 100th club. Cathy replaces Bloom County in the club so our total is still 16 strips that have 100 strips or more.

Sally Forth, Arlo and Janis and Funky Winkerbean entered the Top 30. The three strips that fell out of the Top 30 were Bloom County, Winthrop,  and Gasoline Alley.

With many papers replacing Bloom County with many other already popular strips the universal comic section has its biggest movement:

Three papers, the Central New Jersey Home News (New Brunswick, NJ), Hattiesburg American (MS) and Tampa Tribune (FL) all have the Top 16 strips but none of them had the 17th strip Born Loser. The Hattiesburg America won this year’s Universal Comic Section prize because it had strips 18,19,20.

Here are the remaining strips that appeared in the Top 300 papers, ranked by newspaper count and increase/decrease:

Jeffrey Lindenblatt's Paper Trends: The 300 for 1990 -- Winners and Losers

This year we have something that rarely happens in newspapers: a strip in the top 10 coming to an end. Most comic strips begin with either a small or big debut, reach a peak position and over time lose papers and then when strip is near the bottom the syndicate cancels the strip. In this rare case, though, on August 6, 1989 Berke Breathed decided to end his daily strip Bloom County and transform it to a Sunday-only feature, called Outland.

Since Bloom County’s debut in 1980 it has been gaining papers every single year. In last year’s survey Bloom County was the 9th most popular strip with 133 papers. On the following Monday there were a huge number of open spaces available. So, what did newspaper editors add to their papers? The answer is that except for one rookie practically all of them were veteran strips.

Leading the pack would be Calvin and Hobbies with a whopping 57 papers. Other big winners were Fox Trot with 25 papers, Far Side and For Better or For Worse with 19 papers and Cathy with 18 papers. Here are the rest of strips that gain at least 5 papers:

On the other side of the coin, all the strips that lost 5 papers or more were also veteran strips. Berry’s World took the biggest hit, losing 13 papers. Andy Capp and Nancy continued their losses with 6 and 5 papers respectively. Amazing Spider-Man and Phantom lost 5 papers each, mainly replaced by the new  Batman strip. Here is the complete list of all the strips that lost 5 or more papers:

The soap opera strips are continuing their slow demise, dropping about 6% since last year:

Last year the rookie winner was a revival of the strip that debuted in 1934,  Li'l Abner, returning with reprints of strips from the late 1940’s. This year the top two rookies follow much the same path – they are revivals of classic strips. At least in this case, though, they are coming back with original material.

The top rookie with a strong debut of 32 papers is the revival of Walt Kelly’s Pogo. This new version is  by Larry Doyle and Neal Sternecky and syndicated by Los Angeles Times Syndicate. This is the syndicate’s first rookie top honors since Star Wars in 1979.

Coming in second is a character that believe it or not is having its fourth run in newspapers: The Batman. The reason for the revival was the big success of the new Batman film during the summer of 1989. The strip was originally done by Max Collins and Marshall Rogers; after three months the strip would be taken over by William Messner-Loebs and Carmine Infantino. It was syndicated by Creators Syndicate.

There are three other important debuts this year. Last year King Features introduced their major African American strip with Curtis; this year both Tribune and United enter the fray with Herb and Jamaal (8 papers) and Jump Start (6 papers). Also, we have the debut of a strip that would be a big success in the 1990’s but in this survey it started with a paltry 4 papers: Dilbert.

Wish You Were Here, from Charles Schulz 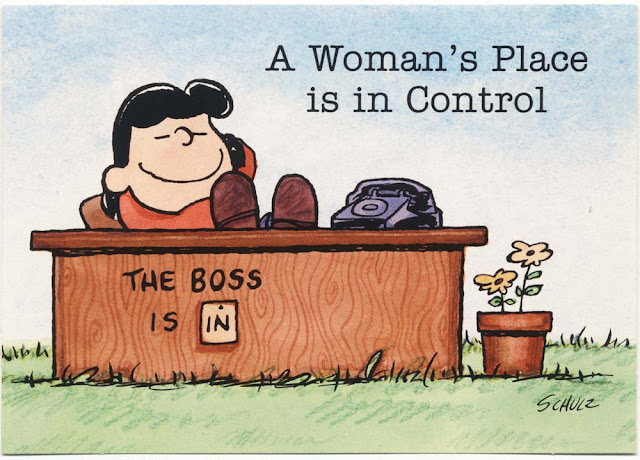 Comments:
Hello Allan-
I wonder if they still sell these today? There's not many postcards at all any more, but they used to be, like Peanuts licensing itself, ubiquitous.

According to my search there are still Hallmark stores in existence in some malls. So maybe.

But I live in a tourist area, and the only postcards sold in souvenir stores here are beauty photos -- no humour cards at all.