April 23 1910 --  In February, Frankie Conley won the batamweight title against Monte Attell, a better fighter who evidently had a bad night. Conley's first defense of his title on April 28 will be against Danny Webster, who had fought Attell the year before but lost on a narrow newspaper decision. The LA Examiner rates the odds as dead even between the two for this upcoming fight, but Herriman seems to side with Conley keeping his crown.

Obscurity of the Day: Double Trouble

Artist Bill MaLean got the brilliant idea to create a comic strip about the travails of raising twins from his wife. When she brought twins Jeannie and Johnnie home from the hospital his noggin got to calculating, and the rest is (obscure) history. MacLean spent awhile shopping around his brainchild, Double Trouble, but didn't find any takers until he got a priceless piece of publicity from Parade magazine, which ran a three page story about his strip (well, actually, it was mostly a picture story about the cute twins, but still...): 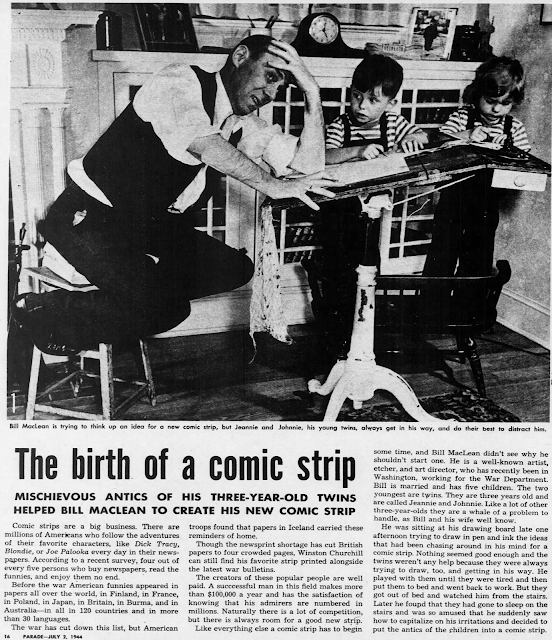 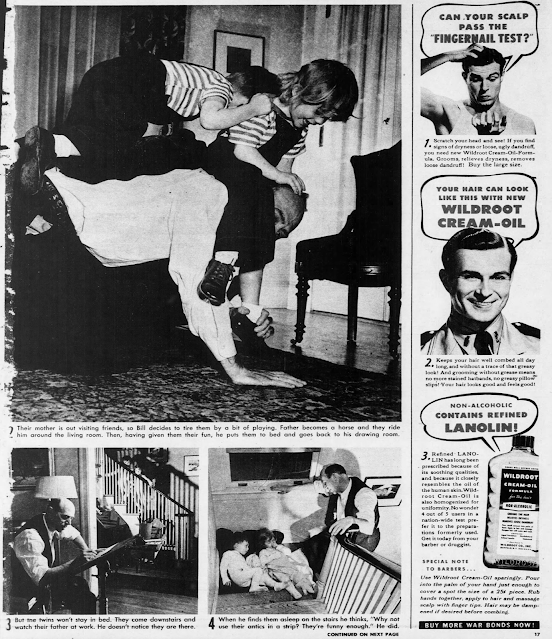 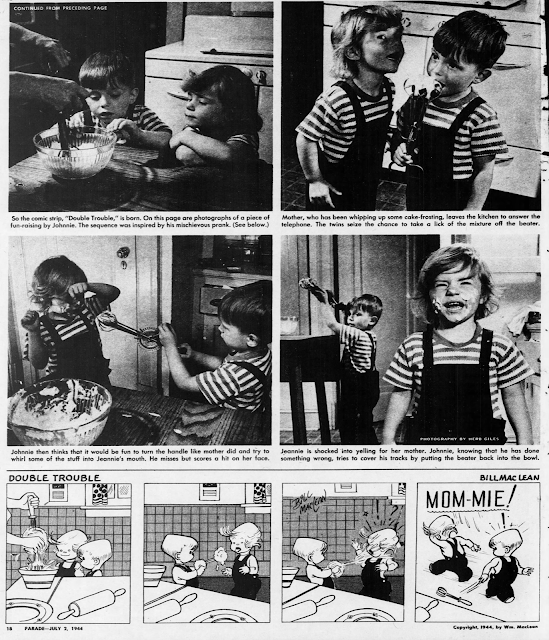 With coverage like that to include in his promo mailings, it wasn't long before he garnered interest in the strip, and from no less than King Features.

The strip debuted on November 2 1944* as a daily-only strip, and despite the very cute shenanigans of Jeannie and Johnnie, the list of clients comig on board was rather small. I can only surmise that the problem was the art style, which is workmanlike enough, but the kids really fail the cute test. Johnnie, especially, with that block head and bizarre premature balding, is a little creepy. On the other hand, the gags are kind of wonderful, in that they usually stay out of the trap of making the kids appear to be outright hellions. Like the later Dennis the Menace, there's rarely any real malice involved, the exuberant kids are just having trouble navigating diplomatic detente with the adults in their lives.

As is often the case with King Features, once they take on a strip, they let it run even when the client numbers are pretty sorrowful. Double Trouble never really found much interest from newspaper editors, but it ran until October 3 1953*, a more than respectable nine year run.

Comments:
I like the artwork, his illustrations are well done. 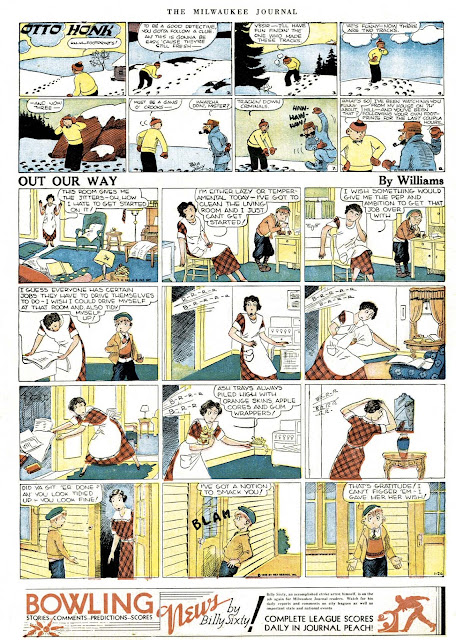 While NEA offered some very fine comic strips among their blanket service offerings, one real stinker was the Sunday version of J.R. Williams' fine daily panel, Out Our Way. The Sunday version took one occasional aspect of the daily, a typical suburban family named the Willets, and made them the star of the Sunday show. Despite the Sunday debuting a mere eight months after the daily in 1922, Williams evidently fely secure enough in his position that he probably never touched the Sunday strip. Instead it was handed off to Neg Cochran, who worked on it anonymously until after the death of Williams in 1957 -- surely some sort of record for longevity in ghosting a strip?

But why did the Out Our Way Sunday last so long, you ask, if it was such a stinker? Well, I'll tell you that Neg Cochran was the son of NEA editor Hal Cochran, and you can draw your own conclusion. But nepotism can't be the whole reason, because the Sunday Out Our Way, as hard as it for me to believe it, was a popular inclusion to Sunday sections for NEA subscribers even though there were other and better Sunday strip options distributed by the syndicate. Perhaps it was simply that newspaper editors didn't really catch on that their very popular daily series was, in its Sunday version, a deathly pale imitation. I dunno.

Anyhow, this post is supposed to be about the topper, not Out Our Way, so excuse my digression. As with most NEA full page Sundays in the 1920s and 30s, Out Our Way's toppers were produced mostly by different creators than the main strip. This interesting innovation allowed other bullpen cartoonists to share the Sunday color section limelight, and meant that the presumably hard-working cartoonist of the main feature was given a bit of slack.

Out Our Way went through several toppers that were Sunday versions of NEA daily strips; the first was Mom 'n' Pop, and that was followed by Roy Crane's Wash Tubbs. After that there was a strange long foray into activity and puzzle features, often wasting the talent of Crane. On August 19 1934* the puzzles were finally dropped and a new topper debuted. This was Otto Honk, featuring a goofball title character who walks into the same sorts of gags that readers older then six have already seen a million times. Penning this was Bela Zaboly, a young NEA bullpenner at this time. It was an inauspicious debut for Zaboly, but you might say that the quality of Otto Honk meshed perfectly with the Sunday Out Our Way.

Zaboly got lucky in 1936 when Gene Ahern, creator of the popular NEA feature Our Boarding House, decided to jump ship. Zaboly got yanked off the Otto Honk assignment to help continue Ahern's orphaned feature; his last Otto Honk ran on March 15 1936**. Left with no creator to handle the topper, NEA opted to assign it to Neg Cochran himself, which finally gave Neg the opportunity to see his name on the Sunday page, albeit only on the topper. Evidently this didn't strike him as that much of an honor, because he dropped Otto Honk as soon as a replacement could be found. The last Otto Honk appeared on June 21 1936**, and on the next Sunday there debuted the best thing there ever was about the Out Our Way Sunday -- George Scarbo's fabulously drawn Comic Zoo topper.

To this day I find myself blurring Out Our Way with Clare Briggs, perhaps because they both used recurring subheads ("The Worry Wart", "Why Mothers Get Gray", and "Heroes Are Made, Not Born" in OOW), had a repertory of recurring characters in different settings, and featured nostalgia, usually involving small town kids.

AND ... Briggs and Williams both had ghosts doing their Sunday series (Mr and Mrs for Briggs), both of which were crap but inexplicably ran in lots of papers!

Obscurity of the Day: The Genius

Magazine cartoonist Dick Oldden took his whack at newspaper comics with The Genius, a delightful strip about a professor and his lab assistants. Oldden's stylized art was a perfect fit for the small 4-column daily strips of the 1970s, and his Sundays fairly leapt off the page with their bold graphics, unusual limited colour palettes, and modern sensibility. So what went wrong? I'm not quite sure, but my bet is that the gags, which sometimes offer disappointly conventional punchlines, fail to follow through on the avant garde look of the strip.

Oldden's cartoons were often seen in The New Yorker and other top flight magzines of the day, and those tended to be more surreal gags, so readers familiar with Oldden might have felt he was phoning it in for the strip. However Oldden was a purchaser of gag material and Sam Gross has claimed that he did much of the gag-writing*. Gross' sense of humour would have been a perfect fit for Oldden's style, but maybe he just couldn't write quality material fast enough for the rigours of a 7-day a week strip.

The King Features daily strip debuted on May 14 1973, with the Sunday following on May 20**. After four years of tepid sales, Oldden and King chalked this one up as a failed experiment on May 8 1977***.

Comments:
I like it! I'm surprised that Oldden didn't find his groove for it. It has super potential. 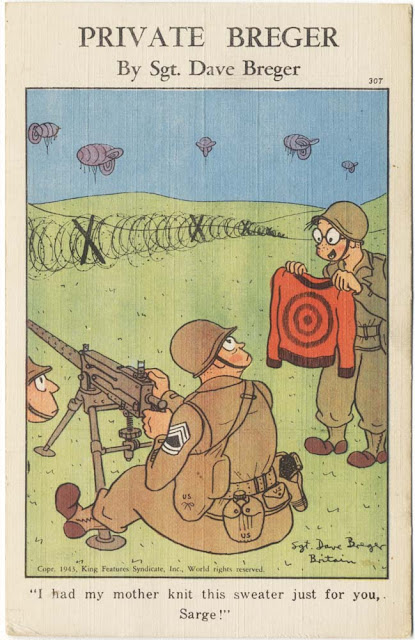 Here's another Private Breger card from Graycraft, this one #307 in the series.