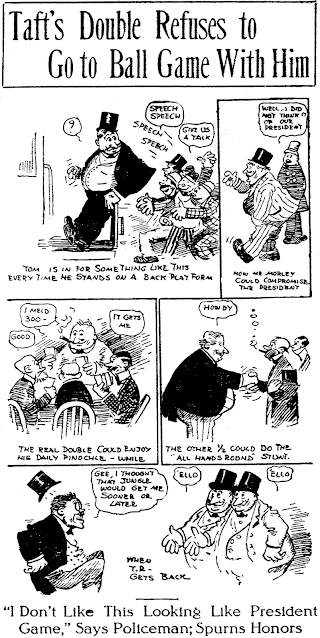 April 28 1910 -- President William Howard Taft has a doppelganger in "Big Tom" Morley, a Pittsburgh police sergeant. But Morley, whose weight was once not nearly that of Taft, but has lately ballooned, is not all that fond of the comparison. In fact, the idea was floated that Taft and Morley could attend a Pirates game together for some cute photo ops when the president was visiting town, and Morley wants none of it. He wishes people would just leave him alone about this presidential double business. 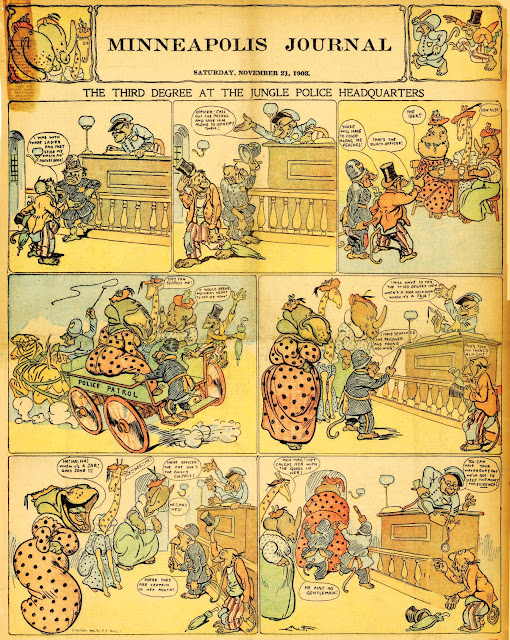 In my book you'll find a listing for a Mark Fenderson series penned for the C.J. Hirt version of the McClure Syndicate Sunday comic section. According to the listing, the series ran April 5 1903 to April 8 1906, it starred jungle animals but seldom had a running title. I chose to list it under In The Jungle because there was a stretch where that phrase was often part of the title. Okay, so that all sounds sort of reasonable, right?

Well, when I decided to cover the feature on the blog I looked over the samples I have on hand. I started feeling like throwing all of Fenderson's animal strips under a single title like that might not have been quite the right thing to do. Part of the problem is that I was relying on Dave Strickler's index of the Chicago Inter-Ocean for much of the information, and he gives me start and end dates, but no detail on what he found in between.

So I decided that since the Inter-Ocean is now available online, it is high time I indexed it myself. It was definitely worthwhile doing, because it is the earliest paper I know of to have adopted the C.J. Hirt version of the McClure section, and as it turned out, by combining it with the Washington Star, and filling in a few miscellaneous gaps with the St. Paul Globe and Columbus Republic, I could trace the entire run of the C.J. Hirt section from earliest known (March 29 1903) to when it was replaced with the Otis F. Wood-copyrighted section on June 24 1906*.

I learned a lot from this exercise, correcting some errors and discovering that I need to be even more careful about vetting newspapers that run material late. For instance, check out the sample reproduced above from the Minneapolis Journal. It ran there on November 21 1903, but that is almost two months late compared to our gold standard for the C.J. Hirt section, the Chicago Inter-Ocean. It is situations like this that invite finding series where none exists. For instance, let's say I happen to have in my collection a copy of the Inter-Ocean of 9/27/1903, and it has a one-shot strip called, let's say, Zippy The Zebra. Later on, I happen to get a copy of the Minneapolis Tribune of 11/21/1903, and see that it, too, has a strip titled Zippy The Zebra. Without seeing the two sections at the same time, and therefore recognizing that they are in fact the same strip, I'm left believing that I've found an undiscovered series by that name. That's a great way to trash my carefully researched listings, in which I try to guarantee that no 'phantom features' appear.

That problem isn't limited to 'phantom features' -- it applies to strips like In The Jungle as well. While it may be a perfectly valid series (more on that later), but if I have a mixture of Minneapolis Journal and Chicago Inter-Ocean material informing my research, I end up thinking that there are a lot more of these strips than there really are, since every single example is duplicated.

End of cautionary tale. Let's get back to the specific case of In The Jungle. Now that I have an almost-perfect index of the entire C.J. Hirt section run, what did I learn? The short answer is that calling all Fenderson's animal strips a series is probably not the way to go. Let's take a detailed look at the strips that comprise Fenderson's so-called In The Jungle strips. Here is every strip that was previously considered (or could be considered) to be part of that series:

I know that's a lot of data to take in, but let's start by noting that there is a very definite series here, called The Jungle Twins (underlined in titles). This series starred two juvenile hippos -- consistent characters, consistent titling, unlike all the other strips. That deserves it's own listing, not to be lumped in with other jungle animal strips. So let's take a second look at the listings once we remove that newly recognized separate series:

First thing I notice is that by 1905 Fenderson seems to have recognized (finally) that he has a series going here. The phrase In The Jungle is used consistently on each episode from January 15 to August 20.  There are seven episodes in an eight month period. By comparison, the nine jungle animal episodes before that are often widely scattered; in one case five months go by without a candidate strip. Yet they all share the same idea, monkeys interacting with other exotic animals. The only outlier is that 1906 episode, in which humans appear and no monkeys -- I think that one really doesn't qualify.

My feeling is that the episodes of 4/5/1903 through 8/20/1905 should be listed as a series under the general title In The Jungle, but with an explanation that before 1905 the titles are inconsistent, and episodes sometimes do not appear for months at a time.

Agree? Disagree? Fell asleep many paragraphs ago? Tell me what you think.

Comments:
I found all of that fascinating and illuminating. Such ardent attention to detail is invaluable! Reconstructing artistic and marketplace decisions is like writing a biography! 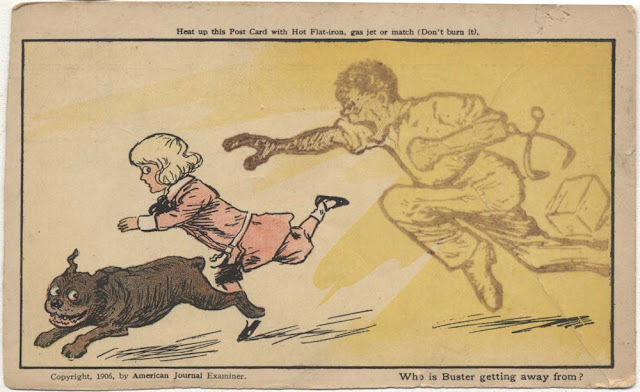 The Hearst 'Li'l Arsonist' series continues with an entry featuring Outcault's Buster Brown. Here's one of the few cases in which the to-be-revealed portion of the picture is not incredibly obvious. Buster, after all, gets chased around by a lot of disgruntled folks. not just the iceman.

Comments:
It doesn't appear that the ice man, or for that matter, Buster and Tige, were drawn by RFO.