May 5 1910  -- Yet another in the seemingly endless well of Herriman gags about the level of public interest in the upcoming Fight of the Century.

Obscurity of the Day: Character Sketches 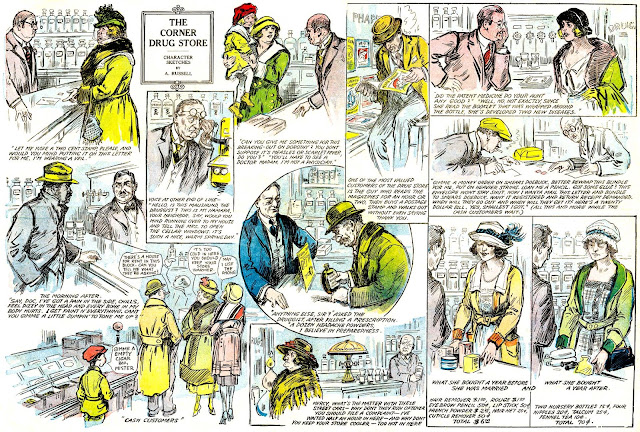 The great W.E. Hill Sunday page, Among Us Mortals, debuted in 1916 to immediate success. The page offered a group of beautifully drawn cartoon vignettes all about one common subject which changed weekly. While that doesn't sound like an earth-shattering new idea, Hill's page was also a little different in that it was offered for use primarily outside of the Sunday comics section, the impressive drawings looking especially handsome when run in the rotogravure section. Newspaper cartoonists who fancied themselves to be somewhat more artistically advanced than their brethren saw that this could be a showcase to show off their chops. Imitations of Among Us Mortals began to pop up all over the place.

One of those me-too features was Character Sketches, by A. Russell (I've not been able to discover what the A stands for). This feature ran only in the St. Louis Globe-Democrat and started there on January 21 1917, just eight months after Among Us Mortals debuted in the New York Tribune. While I would give Mr. Hill the nod for a greater achievement in art, Russell's version was quite impressively drawn, too. Character Sketches did not get prime placement in the rotogravure section; instead he was afforded a color page in the magazine section. Russell wanted people to focus on his linework, so though the page was run through a 4-colour press, he used it sparingly for spot colour.

As best I can tell Character Sketches was not offered in syndication, so it was enjoyed only by readers of the G-D. They got to enjoy it for a long time, too. The feature ran for just short of a full decade, ending on April 18 1926. On April 6 Russell suffered a stroke, from which the paper said he was expected to recover, but evidence seems to indicate the contrary.

[EDIT: EOCostello has lifted the veil on A. Russell, see comments below.]

Comments:
For what it's worth, the January 28, 1922 edition of the Globe-Democrat has a brief article/advertisement, showing a picture of the gentleman, who appears middle-aged.

Gould's 1921 Red Book city directory lists an "Alf Russell," married to an Emma, at 3002 Geyer Avenue, the address listed for Russell in that April 6, 1926 G-D article about his stroke. Further developments as they become apparent. 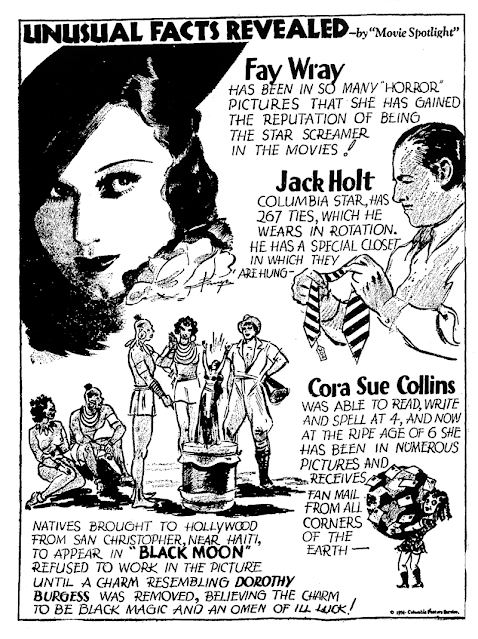 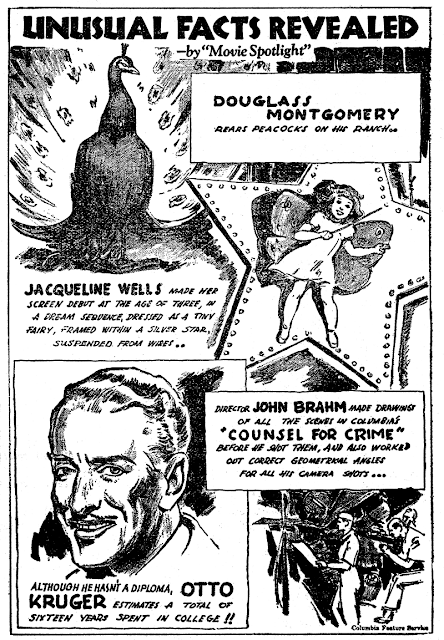 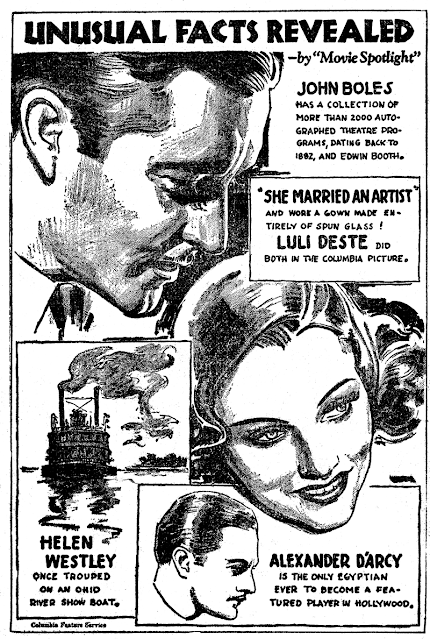 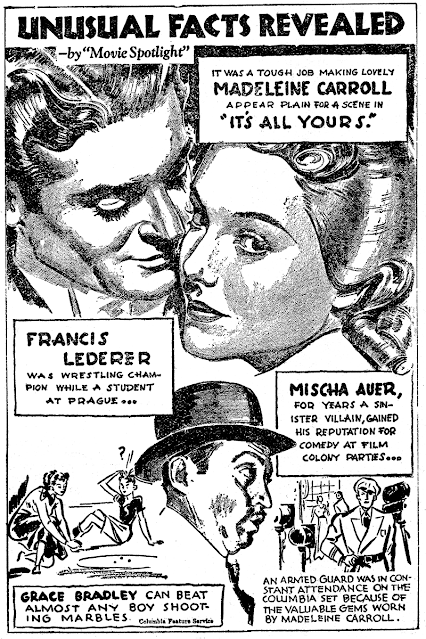 What to do if you are a newspaper editor wanting to add a little Hollywood glamour to your paper, but you don't have the resources to buy a feature like Seein' Stars, Screen Oddities or even a celebrity gossip column? Never fear, Mr. Editor, just check your in-box. There you'll find freebies from some of the major Hollywood studios that fit the bill.

While most of these freebies, ads disguised as entertainment, tried to hide their origin, you've got to give Columbia Pictures points for being forthright about Unusual Facts Revealed. It carried a 'syndicate stamp' for Columbia Feature Service, a nom de plume about as transparent as Hemming Ernestway.

As with most of these freebies, determining start and end dates is pretty well impossible. Even if they came with release dates on the proofs, you can be sure any newspaper that was on the skids enough to use them ran them when they needed to fill a hole, even if it was ten years late, or running a whole page's worth of them in a single edition. I suppose if we wanted to make a life's work out of Unusual Facts Revealed we could examine the movies being flogged, check their release dates, and .... no, it's just too depressing to think about a time sink like that.

My best fix on a start date, December 1 1933, is from the Moorhead County Press. The feature seemed to be available on a more or less weekly frequency through 1943*, I'm guessing with some gaps. It's not as if Columbia Pictures was overly concerned with guaranteeing papers an installment every single week.

The feature was credited as "by Movie Spotlight", and I'm going to go out on a limb and declare that's not someone's real name. Seldom was the art signed, and there were definitely a number of different artists involved, but Barrye Phillips did sign some early episodes (the top sample here is signed by him), and he occasionally admitted his involvement through sometime in 1935. I don't know much about him, but his work appeared on some paperback and magazine covers in the 1950s and 60s. He also did a stint on the Sunday strip Famous Fiction from 1944-46.

After Phillips' departure the panel was unsigned for a long stretch, but then in 1939-40 Erwin Hess signed some. After that the feature was unsigned until its apparent end in 1943.

Obscurity of the Day: Ginger 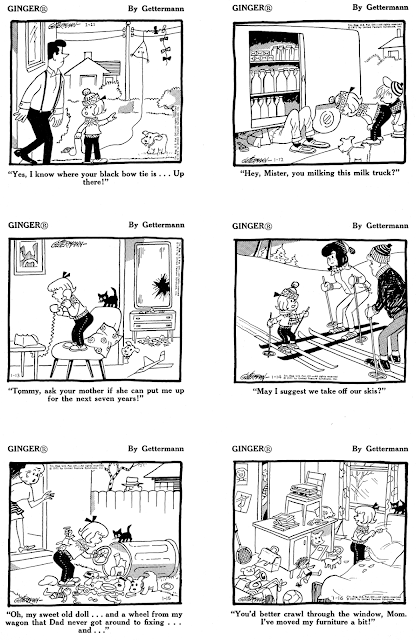 To the admittedly slight extent to which I have considered Ginger, a daily panel about an impish little girl, I always assumed that the creator, Orla Gettermann, was female. Oops! Turns out that we better call him Mister Gettermann, or better yet, Herr Getterman, since he was Danish.

Ginger was just one of many Dennis the Menace competitors who ran rampant on the comics pages starting in the 1950s, and for the life of me I can't see what might set Ginger apart from all the others. The art is okay but nothing to get excited about, and most of the gags feel like they could have been recycled from all the other panels of this type. My problem with these features, generally, is that I sense no actual personality in most of these kids -- they are just automatons, programmed to produce a wearisome formulaic gag every day.

Ginger debuted in Denmark in 1958*, and got picked up for American distribution by United Feature Syndicate the next year, debuting on September 7 1959. The panel was not picked up by very many U.S. papers, but UFS stuck with it, presumably because they were paying a low re-run rate for the work.

Ginger had a surprisingly long run in the U.S., almost twenty years. It was last advertised in Editor & Publisher in 1977, and the latest sample I can find is an appearance in the  Gettysburg Times dated September 23. That places the earliest possible end date as September 24 1977. The Times, who evidently felt that impish kids were a necessary ingredient in the paper, replaced Ginger with yet another of these panels, Gumdrop, also from United Feature.

* Under the title "Gitte" I think, though there is very little information out there, and most of it is of course in Danish. Any Danes out there to tell us more?

Comments:
"Gumdrop" might be a good candidate for Obscurity of the Day, if only for Jerry Scott's involvement with it.

Hello Allan-
It's impressive this panel lasted so long, as either I somehow managed to never see a paper that took it in my life, or it's so amazingly hackneyed it didn't register.
Might you consider that a precursor in the shall we say, distaff Dennis panels like "Sweetie pie" may have been, for at least a while, been a hit with client papers, so it brought about also rans like "Ginger" and "Amy?"
Today's date reminds me of another little girl panel, the uniquely ill-timed "Caroline" panel, about JFK's young daughter, launched in November, 1963. 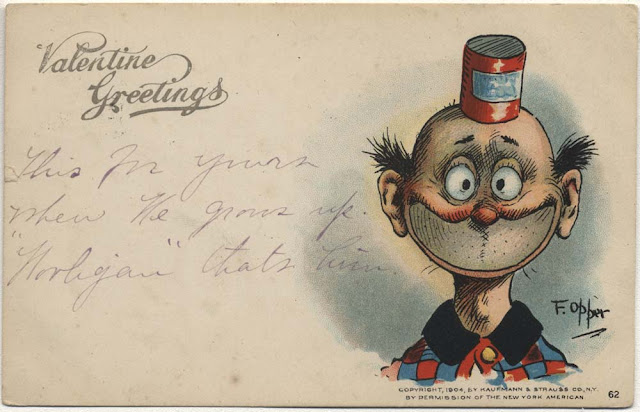 A great bust of Happy Hooligan on this 1904 Kaufmann & Strauss card, #62. Most of this series was Outcault cards, but there were a few from Opper, including this one that I failed to recognize at the time. It was correctly IDed by Mark Johnson, though, so thanks Mark.

Comments:
I have seen this same card, with the "Valentine Greetings" omitted.