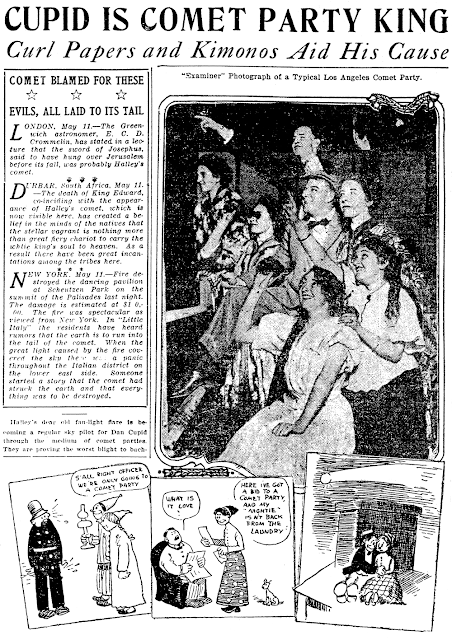 May 12 1910 -- Herriman adds a little colour to this article about the worldwide reactions to the appearance of Halley's Comet.

Obscurity of the Day: Mr. Grouch 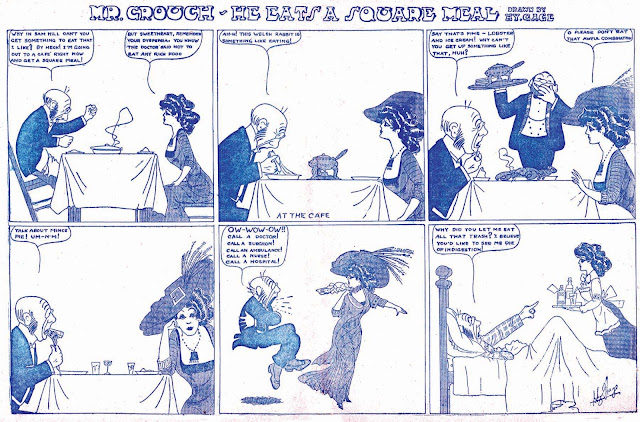 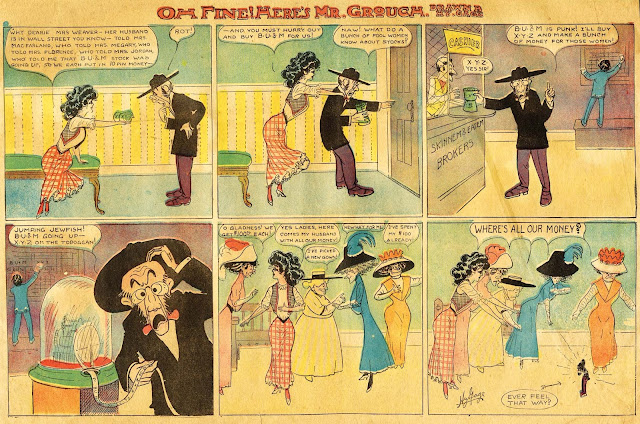 Hy Gage produced a lot of comic strips over a long career, primarily for the Philadelphia papers. He worked most closely with the Philadelphia Press from 1906-1913, where his headline strip was Mrs. Rummage the Bargain Fiend. His secondary strip was this obscurity, Mr. Grouch.

Mr. Grouch is just that, a pruny old fussbudget who is certain he knows best, and flies into a tantrum at the drop of a hat. Inexplicably, he has a gorgeous young wife who puts up with his anything but loveable antics.

As with all of Hy Gage's work, the cartooning seems quite basic and flat yet shows a command of action and expression that really amps up the humour. Gage could take a tired old gag and make it worth seeing anew purely for the treatment he gives it.

The Philadelphia Press also apparently had an agreement with the McClure Syndicate to share material with them in 1908-09. While McClure chose from the Press lineup mostly Gage's #1 strip, Mrs. Rummage, and Hugh Doyle's John Poor John to pad their sections, Mr. Grouch also made occasional appearances. 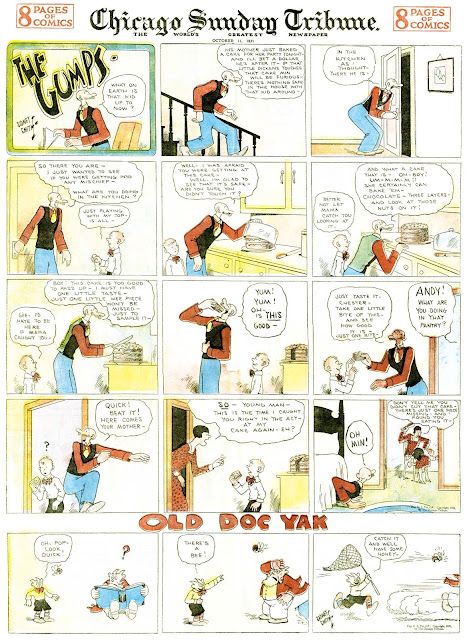 The Chicago Tribune-New York News Syndicate was a johnny-come-lately to the world of toppers, but when they finally caved in to peer pressre in late 1930, their cartoonists behaved much as those at other syndicates and many just revived one of their old strips as the new bonus attraction.

Before Sidney Smith became one of the most widely known and richest cartoonists in the world for his huge smash hit The Gumps, he had already been a mainstay in the Tribune Sunday section for years with, among other features, Old Doc Yak. The strip starred ... yes ... a yak. But Doc had very few yak-like properties; his schtick was mainly speeding around in his jalopy, Old Number 348, trying to collect on his doctoring bills, coming up with money-making schemes, or jousting with his son, Yutch.

Despite Old Doc Yak being a Tribune reader favorite, in 1917 Smith came up with the idea for The Gumps, and he felt so strongly that it would be a big success that he actually had Old Doc Yak lose his house to The Gumps when they took over the daily strip. In 1919, with The Gumps obviously the wave of the future, Yak sold his Old Number 348 to them in his final Sunday. The virtual handshake to turn over the reins to the new kids in town was completed.

So when Smith was called on in 1930 to add a topper, Old Doc Yak was taken out of the mothballs Starting with the Sunday of December 7 1930, half-hearted strips like that above were grudgingly added. They certainly didn't have the magic of the original Doc Yak strips, and Smith used his clout with the syndicate to finally dump the topper a little over three years later. The last Old Doc Yak topper ran on February 25 1934. Until long after Smith's death The Gumps Sundays were never again saddled with toppers.

If Old Doc Yak sounds intriguing to you (the original, not the topper), head on over to Barnacle Press, where they have a substantial collection of Old Doc Yak strips, including the dailies which are (IMO) the most fun.

Comments:
Hello Alan-
For many years, I've heard that most of the Chicago Tribune characters were devised by Colonel Paterson himself, and the artists just followed instructions, whether they had much interest or not, but would be guaranteed strong backing by the powerful syndicate. That would explain so much mediocrity over there.
Could the Gumps have started out that way, and that's why Doc Yak had to give up his home and belongings in what seems almost like a surrender ceremony?

My time machine's on the blink again, so who can say. But Smith was an unadulterated comic genius, no two ways about it, and if Patterson had the idea for a comedy - adventure - soap mashup that's all well and good but in lesser hands than Smith's it probably would have gone nowhere. In fact it did, because there were somewhat Gumps-like strips earlier on that rate only obscurity status.

In fact I've always been a little mystified by Goulart, Horn et al claiming that The Gumps was groundbreaking, the first continuity strip, etc etc. In fact there was darn little continuity in the strip early on, and it followed a path well worn by other 'family' strips that employed light continuity. Seems like it's more that it rang a bell with the Trib readers, and was available just as the Trib syndication sales force was waking up and beginning to knock on doors.

Obviously, the ChiTrib strips often would gravitate to sudsy continuities after establishing themselves as gag-a-days at the start. Guess Roger Bean was the first daily soap opera family melodrama, but the Gumps was the first really well distributed big syndicate one, and that changed the comics world. It was a new and exciting formula, especially for editors, as it proved a compelling hook to sell tomorrow's papers with. Note that Toots and Casper was changed to become a knockoff of the Gumps beginning in the early 20s.

Obscurity of the Day: The Pranks of Pantomime Pete 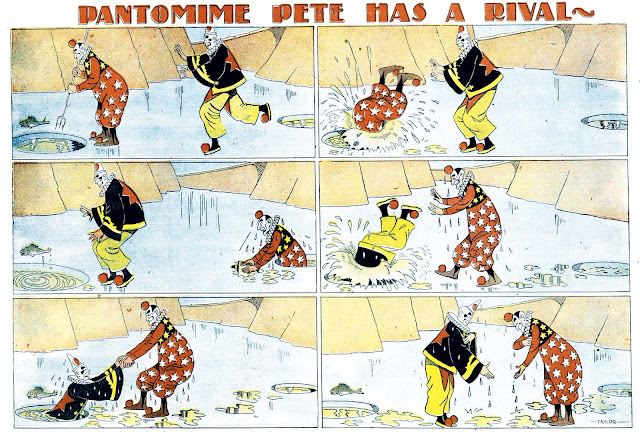 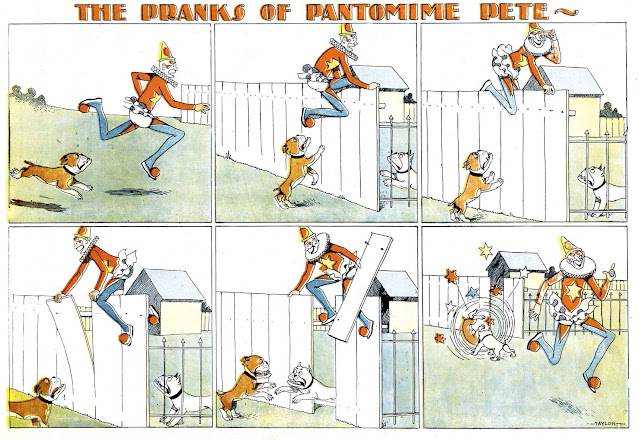 I've always said that if I got to go back in time to interview just one cartoonist, it might have to be Roy W. Taylor. Taylor worked at just about every major paper in New York and Chicago, so just imagine the stories he could tell. Taylor had a lovely clean style, and if his gags were not really top-notch you tended to forgive him because his strips look so gosh-darn inviting.

Today we feature Taylor's The Pranks of Pantomime Pete, a strip that he did while on a stint with the Chicago Tribune (though you can bet he was submitting material elsewhere at the same time). Walter Bradford pretty much dominated the Trib's funnies section in the first half of the 1900s, but Taylor, in his short stints there in 1901-02 and 1905-06, gave him a run for his money. Unfortunately they both kinda got the bum's rush in 1906 when the Tribune decided to have a bunch of German cartoonists produce the majority of the section.

The Pranks of Pantomime Pete ran from December 3 1905 to April 29 1906; in the latter part of the run the strip only appeared sporadically (... darn Germans). If you have a hankering for the whole run of Pete, albeit in living black and white, head on over to Barnacle Press for the full monty. 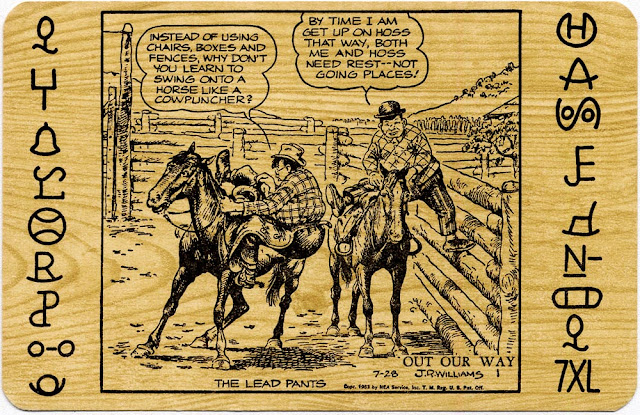 Here's another postcard from J.R. Williams, this one featuring two city slickers (I think) debating the better way to mount a horse. Why the second fellow speaks broken English is a mystery to me -- it seems to have nothing to do with the gag.

This card is W-530 of the second series of Standley-May Out Our Way cards.

Comments:
I think they're both supposed to be Chinese.

Just the character on the right is supposed to be Chinese; he's the replacement for the earlier tall, large footed black guy that was the bunkhouse cook/washer/handyman for so many years.
It would seem Williams eased him out in favor of the Chinaman, but it would seem he never prepared well, because not only does the new fellow's appearance fail to make him distinctly Chinese, (What kind of duds are those?), JRW has a poor grasp of what Pidgin patois sounds like.
In other panels using him, Williams forgets entirely to attempt any dialect at all.