May 13 1910 -- If you have been following Herriman's work lately, you only need to read the first panel; you can easily fill in the rest yourself.

Obscurity of the Day: P.J. McFey 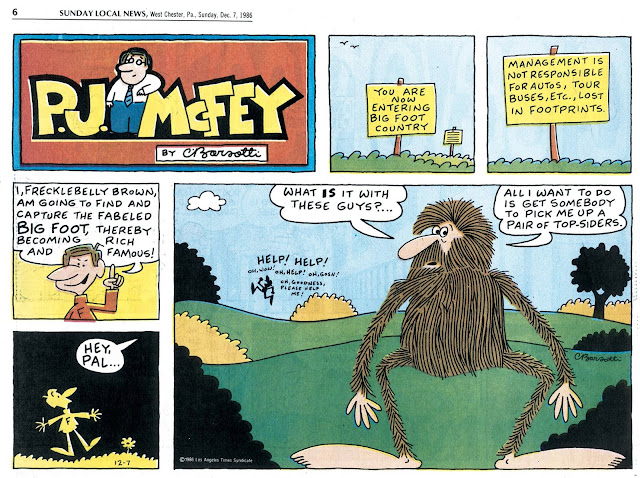 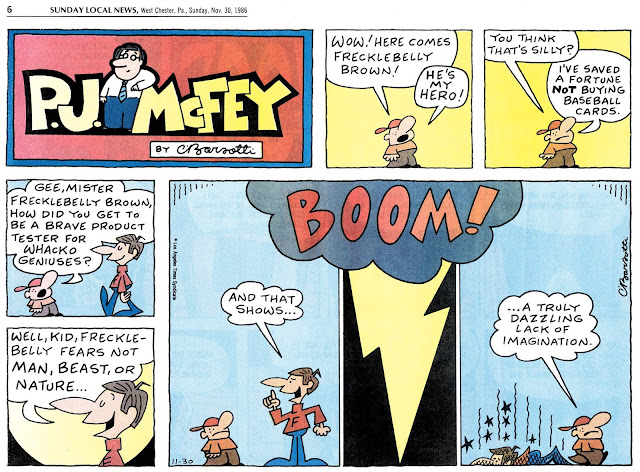 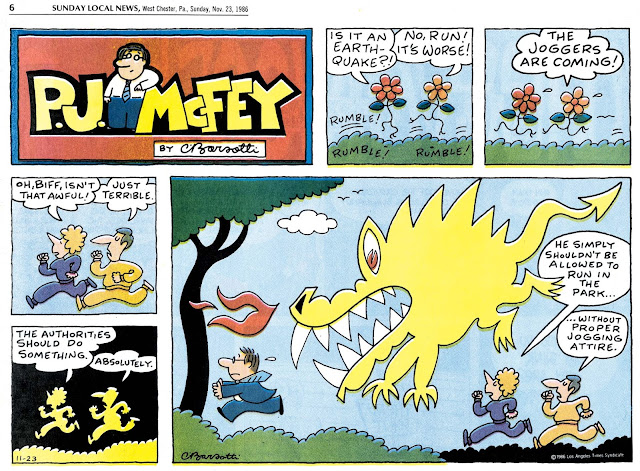 Charles Barsotti was a well-respected, inventive and prolific magazine gag cartoonist, best known for his regular appearances in The New Yorker and Playboy. But Barsotti obviously pined for a dependable and ongoing gig, so he tried to break into the ranks of the newspaper cartoonists a number of times.

The last attempt I know of is with the strip P.J. McFey, which was picked up for syndication by the LA Times Syndicate. This strip was a gag-a-day affair starring a put-upon corporate drone who has to deal with the strange behavior of the executives, the tech people and the marketing folk. It sort of sounds like Dilbert, but what was missing were the consistent and strong personalities, as opposed to basically generic gags that happen to use a few of the same weakly defined characters.

The daily and Sunday strip debuted on January 12 1986*, and within six months Barsotti wasn't even sticking with his initial direction, now sometimes having McFey appear as just a generic 'everyman' figure, sometimes abandoned to being a background object in a gag having nothing to do with him. Barsotti even started dropping him altogether from the Sunday strip, as can be seen in the samples above.

P.J. McFey didn't make it to the first anniversary mark, killed by mutual consent between syndicate and creator on December 13 1986. The day after that, a major profile article about Barsotti appeared in the Kansas City Star, and the strip was discussed:

“Mickey Mouse is kind of an icon,” [Barsotti] says. “It shows you these things can work.” The “things” are cartoon characters. One of Barsotti’s that won't is PJ McFey. “I just hate to say it,” Barsotti said one evening not long ago. If he wouldn't, then Lou Schwartz of the Los Angeles Times Syndicate would. “In the wonderful world of comic strips, ‘PJ McFey’ has had his run.” Officially, the last of the strips died yesterday but Barsotti had stopped drawing about two months before. The strip, in which McFey, a middle-aged, middle-class office worker, wrestled with life's demons, never hit stride. At the end it ran in about 30 papers, including The Star, “Doonesbury” appears in about 750. “I'm very upset about it,” says Barsotti, kneading a blackened eraser between his fingers. “It was obvious to everyone else I had too much to do, although I don’t think I sloughed off.” Work was winging out of his house via Federal Express sometimes seven days a week. He was doing drawings for the magazines, plus cartoons for his daily and weekend spaces in USA Today and USA Weekend, plus seven McFeys in 2 to three days. In coming up with the name, Barsotti pulled the PJ from PJ Clarke's, a watering hole in New York. The Mc was an add-on but the “fey” derived from the more positive meanings of that word, such as being clairvoyant. In the end, it fit the preferred use of the word: “Fated to die soon.”

Comments:
I recall it happening in later installments of "Sally Bananas", an earlier Barsotti strip. Sally hardly appeared except for occasional appearances, instead featuring her niece or random side characters.

It's a shame "Sally Bananaas" never took off. I thought that strip was fun.

I enjoyed seeing these examples of the "P.J. McFey" Sunday strip. They make me curious about the daily version of the strip.

Have you run across any interesting dailies on this -- perhaps strips featuring the title character?

Here's a bunch of random dailies I found. Much of these are from later in the run, although some of them still feature the main character - https://imgur.com/a/zbcOdsT

Thanks for the help Brubaker. I notice that your samples also tend to veer kinda sharply away from the stated subject of the strip!

I agree with Allan -- even given these good examples of the daily strip, it's still difficult to focus on McFey. I look at these and wonder, "Gosh, what was this strip supposed to be about?" 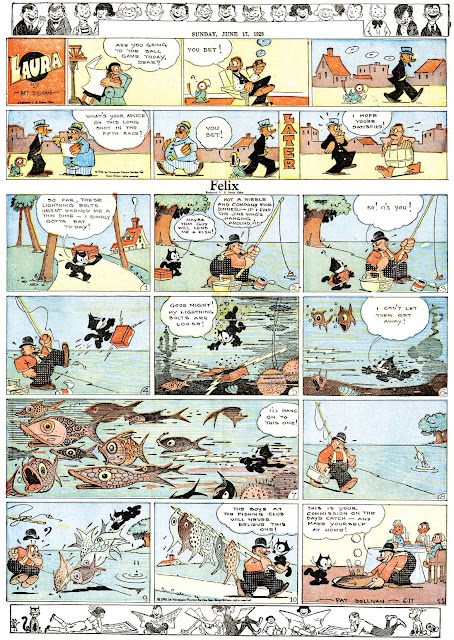 Felix the cat, one of the biggest of the early animation stars, made the transition to newspaper comics in 1923 with King Features. The strip, which was credited to animation studio head Pat Sullivan, was mostly ghosted by Otto Messmer for the first two decades of its existence.

When Hearst strips began carrying toppers, Felix was unusual in that it didn't go through a few different test run top strips before settling on one for the long run. Felix added the strip Laura as its first topper on June 6 1926* and stuck with it for nine years, finally changing to a new strip after the Sunday of June 16 1935**.

While many toppers reused old characters from the creator's oeuvre, Laura seems to have been a brand new creation. The strip starred a parrot who quickly learns bits of speech from her owners and repeats them at inopportune moments. The strip was pretty much a one-joke affair for its entire existence, but the gag was pulled off with originality and playfulness that kept it from getting too stale.

According to some online sources, Laura, or a parrot that resembles her, was later incorporated  into some of Felix's film shorts.

Comments:
I've seen lots of the Felix cartoons from 1919-37, and though a parrot may show up in one along the way, there never was a role built up for it. That was pretty much one of Felix's character traits; he was Chaplinesque; he was homeless loner.
If you read the early dailies (began 1927) you will see for many months, they are based entirely on aepisodes in specific, named, actual animated films. That eventually stopped, and that was really the only time the strips made a point of identifying with the screen version. Just as well; the strip outlasted the films by many years.

Obscurity of the Day: Switchboard Sally

Hard to believe that King Features would offer a third-rate strip like Switchboard Sally*, the theoretically humorous tale of a hotsy-totsy, smart-mouthed hotel telephone operator. In the 1920s the Hearst organization had the Premier Syndicate imprint in which to throw this sort of junk up against the wall to see if it might stick, and why this did not get flung there I dunno.

Even junk like this can be interesting, though, and in this instance it is the creators who are memorable. The author of Switchboard Sally was H.C. Witwer, who must have been dashing off this tripe purely for the quick buck. Witwer was a popular and prolific writer who made a name for himself with humorous novels, magazine stories and movie screenplays. He was obviously engaged to write the strip purely for the name recognition. Apparently Witwer didn't care much about the potential damage to his reputation.

The artist is the notorious Wesley Morse, who would later win everlasting infamy as the king of the Tijuana Bibles, those x-rated eight-pagers sold under the counter at the corner store in the 1930s-50s. Switchboard Sally gives him ample opportunity to work on his female figure drawing, for which I must admit he had a knack. It's everything else in the strip that he seems to not have an interest in fleshing out; the strip mainly features blank backgrounds and the most minimal props necessary.

Switchboard Sally seems to have debuted on June 15 1925**, and was pretty much a gag-a-day affair. Since the gags weren't very good, there were also some half-baked storylines that went nowhere, so if you disliked the gags you could also be annoyed by the ill-conceived continuity. The latest I can find the strip running is January 2 1926 in the San Francisco Examiner, where daily strips came and went as quickly as mayflies -- can anyone supply a later end date?

One minor footnote is that the strip was advertised as being by Russ Westover in the 1925 E&P listings; obviously this was a typo.

* At least one paper ran it as "Sally of the Switchboard"

Comments:
I never made the connection that Morse was one of the "Tijuana Bibles" artists, but looking at the drawings I can see the resemblance. One of the more wholesome creations Morse was involved in were those "Bazooka Joe" comics that came with the bubble gums.

"It drives me nuts when artists/letterers put quotation marks around dialogue in balloons." 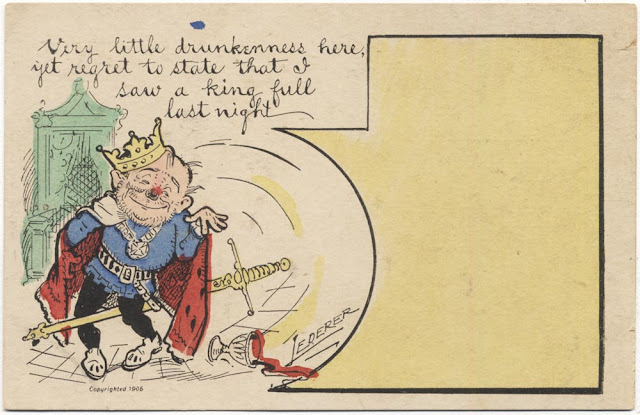 Here's a card from Charles Lederer, dated 1906, but presumably published in 1907 since it is a divided back. No maker is credited but it is likely to be the Monarch Book Company, which published his other cards of this same style.

These Lederer cards all offer gags using wordplay and slang. This one, I have to admit, mystifies me. If there's some slang meaning to "king full" I don't know what it is; in poker it would be a full house with kings high, but what that would have to do with a gag about drinking I dunno. Little help?

Comments:
There is a drinking game called Kings that involves a playing cards, but I don't think this is in relation to this.

This may be explained by a joke that seems to have been popular in the early 1890s. I find it in several newspapers. The gist of it is there some King who gets drunk and beats his three wives. He gets taken before a judge who exonerates because "a king full always beats three queens". I suppose "a king full" means what in today's poker we'd call a full house, probably with kings.

I also wanted to look through some slang dictionaries of the period. Thought I had them bookmarked somewhere on my machine, but can't find them.