May 14 1910 -- Herriman runs the prejudice gauntlet here, calling Jack Johnson -- if I get this right -- a womanizer, a glutton, a scofflaw, a dandy, a money-grubber, a laughingstock, and a pretender to wisdom. All of which, in this cartoon, are looked upon as positive character traits by black mothers.

Nice job George, hope you slept well after drawing this one.

Comments:
Jackson as a dandy trailed by worshipful children seems to echo this 1904 Charles Dana Gibson drawing. A deliberate reference to a popular image or were they both drawing on a real-life cliche?

Obscurity of the Day: Howie 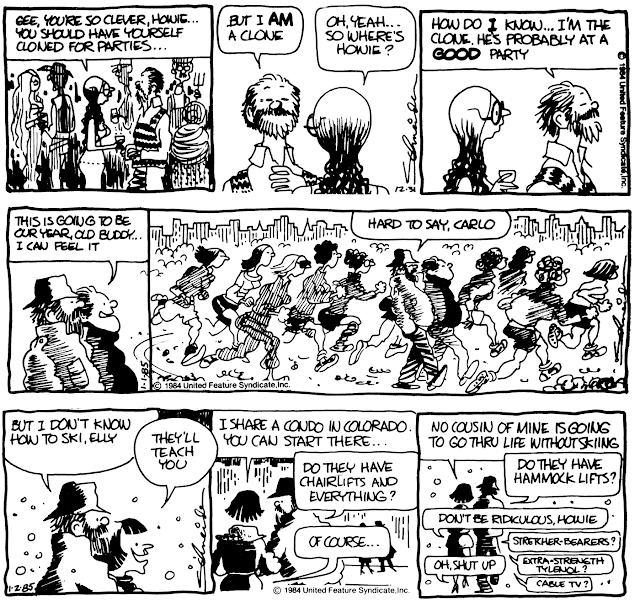 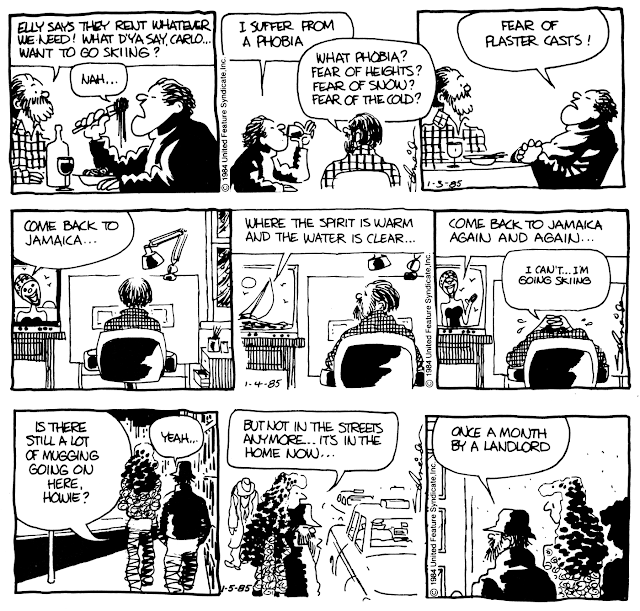 Howie Schneider's claim to fame is the popular NEA comic strip Eek and Meek, which ran from 1965 to 2000. But Schneider made other attempts to get into the newspaper strip hall of fame, least successfully with the self-titled strip, Howie.

United Feature Syndicate, the big brother of NEA, took the strip on despite finding very few clients, evidently feeling that the popularity might build over time. It didn't, but you have to give them points for giving it a try. Howie is a quasi-autobiographical daily only comic strip about a cartoonist interacting with family and friends, or just waxing philosophical. The strip was very well-drawn, using a more detailed, less cartoony version of Schneider's normal style. Theoretically the strip followed his life day by day (the strip was sometimes subtitled A Comic Journal), so not too surpringly it often portrayed him sitting at his drawing board trying to come up with ideas for his comic strip.

Perhaps newspaper editors couldn't see readers identifying with a cartoonist, or maybe they just saw it as a too-egocentric exercise. In any case, Schneider and UFS gave it a year to catch on, and it didn't. The strip began on November 12 1984 and ended on December 2 1985*.

Comments:
Big fan of Howie Schneider. Had no idea this strip existed (loved "Eek & Meek" and "Bimbo's Circus", tho). Art is definitely more detailed than his other work, but it's very much him. 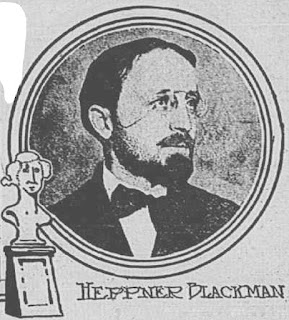 Heppner “Hep” Blackman was born in Heppner, Oregon, on April 4, 1882. His birthplace was mentioned in The Oregonian, (Portland, Oregon), January 6, 1907, and his birth date was on his World War I draft card.
In the 1900 U.S. Census, Blackman was the oldest of three children born to Henry and Fanny. They lived in Heppner on Main Street.
The Oregonian profiled Blackman and said:

…“Hep” was the first white boy born in Heppner after the town was incorporated. That occurred in 1882. His dad was Mayor of the town at the moment, so “Hep” was ushered into this world auspiciously. He graduated at the Heppner High School in 1899, and afterward attended the Portland High School; and subsequently took a course in Armstrong’s Business College. Next he studied law at Heppner in the office of C.E. Redfield, and was ready to take his law examination, but had not yet reached the age for eligibility. He worked as a typo on the Heppner Gazette under Colonel John Watermelon Reddington, and in that publication appeared his first drawings. Then he went to San Francisco, where he worked as private secretary for Judge J.C. Campbell for five years, and during the same time studied art under the Partington’s, and, at length, he worked nights in the art-room of the San Francisco Call. Here is where he really got his first important start and began to show cleverness that counted in his comic cartoons and ideas generally. Last February he started on his brilliant series of “epitaphs” on well-known characters in the San Francisco Bulletin, and just three weeks before the earthquake the first of these fine, telling, strong and irresistibly droll “tombstones” was published in the Bulletin. They were running when the earthquake robbed the boy of all he had and all his chance in the Golden Gate city….

The 1904 California Voter Registration, at Ancestry.com, said Blackman lived at 418 Sutter in San Francisco, California. Blackman was in California when the Arizona Republican, November 7, 1905, published the legal notice for Articles of Incorporation of the Manhattan-Nevada Mines Syndicate, which showed him as a partner.
After the April 1906 San Francisco earthquake and fire, Blackman moved to New York City. American Newspaper Comics (2012) said Blackman’s Rawhide Bill ran in the New York World from September 6 to October 24, 1906. The World, September 7, 1906, printed Blackman’s Epitaph of a Live One, which, apparently, was the basis for the series, Epitaphs for Live Ones. According to American Newspaper Comics, Epitaphs for Live Ones ran from November 10, 1906 to August 5, 1907 in the New York Evening Telegram which also published his Rube the Rotten Rhymester from April 12 to September 14, 1907. 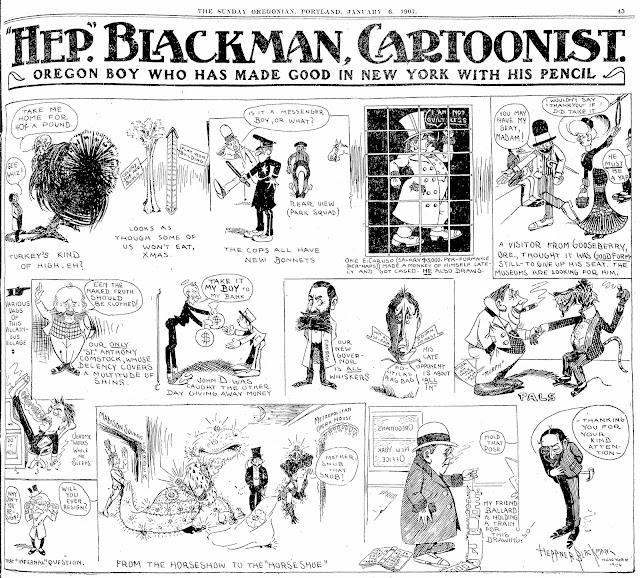 The Oregonian, 1/6/1907
In the 1910 census, Blackman made his home in Fort Worth, Texas at 1011 Burnett. The newspaper cartoonist was married to Irene. Texas Painters, Sculptors & Graphic Artists: A Biographical Dictionary of Artists in Texas Before 1942 (2000) said “Blackman furnished cartoons to the Brenham Daily News between 1911 and 1913.”
The Star-Telegram, February 4, 1916, reported Blackman’s move to California.

Well Known Fort Worth Cartoonist to California.
Fort Worth, Texas, Feb. 3.—Announcement was made tonight that Heppner Blackman, cartoonist of the Star-Telegram and editor of the “Sunday Sandwich,” a Sunday feature of that paper, would leave shortly for California, where he will enter the moving picture business. He has been with the local paper for several years and enjoyed the distinction of being one of the leading cartoonists of the State.
He has considered entering the moving picture field for several months, but only announced his final decision today.

The Editor & Publisher, September 2, 1916, noted Blackman’s return to Fort Worth.

Heppner Blackman, formerly cartoonist and Sunday editor of the Fort Worth (Tex.) Star-Telegram, who recently resigned to enter the moving picture field on the Pacific Coast, has returned to Forth Worth to reengage in newspaper work on the Live Stock Reporter and North Fort Worth Sunday News.

On September 12, 1918, Blackman signed his World War I draft card. His address was 203 Martin in San Antonio, Texas. Blackman was described as medium height and build, with gray eyes and black hair. He named his wife as next of kin. Blackman was a first lieutenant.
According to the 1920 census, Blackman was a Manhattan, New York City resident at 304 West 31st Street. He was a newspaper writer.
The Oregonian (Portland, Oregon), April 1, 1928, reported Blackman’s new job.

One Time Oregonian Joins Fox Publicity Staff.
Heppner Blackman Signs Up for Position in Hollywood.
Heppner Blackman, New York city newspaper man and former Oregonian, has joined the publicity staff at William Fox’s west coast studios, Hollywood.
Blackman was a member of the editorial staff of the New York Daily News for more than three years, serving in the capacity of reporter, labor editor and night city editor. For eight years he acted as current event cartoonist and columnist on the Fort Worth, Tex., Star-Telegram, and has worked at various times on the staffs of the New York American, International News service and on San Antonio, San Francisco and Los Angeles newspapers.
He is a son of the Henry Blackman, internal revenue collector of Oregon, Washington and Alaska during one of the Cleveland administrations.

In the 1930 census enumeration, newspaper writer Blackman and his wife lived in Los Angeles, California at 320 Alvarado.
The 1940 census recorded Blackman in San Francisco where he was a WPA writer. His address was 1080 Post Street. He earned $900 in 1939.
He had the same address when he signed his World War II draft card. Blackman’s employer was the WPA at 260 Market Street. His description was five feet eight-and-a-half inches, 190 pounds, with gray eyes and hair.
The 1950 census counted Blackman and his wife at the same address. He had no occupation.
Blackman passed away on March 13, 1951 in San Francisco. The Heppner Gazette Times (Oregon), March 22, 1951, reported his death.

Former Resident Passes
A short note from Abe Blackman in Portland informed this paper that his brother, Heppner Blackman, passed away in San Francisco March 13 at the age of 68 years. Hep will be remembered by the older residents hereabouts as the family resided in Heppner many years. His father, the late Henry Blackman, was associated in the mercantile business with Henry Heppner, the town’s founder. Hep took up cartooning as a career, working on papers in Texas and other southern states, later engaging in commercial art work in Los Angeles and San Francisco. He was a cousin of Harold Cohn of Heppner.

Blackman was laid to rest at Cypress Lawn Memorial Park.

Obscurity of the Day: Epitaphs For Live Ones

Heppner Blackman seems to have only pursued newspaper cartooning in New York City for a short period, but he penned one quite interesting feature in his short foray there, plus a few that are less memorable. Epitaphs For Live Ones was a series of cartoons in which we see famous peoples' final resting places along with a humorous take on what might be chiselled thereon.

The weekday series was done for the New York Herald, but only one episode was printed in that morning paper, on September 7 1906. After that the series was moved to their evening paper, the Telegram, where it ran from November 10 1906  to August 5 1907.

If you're wondering who the bewhiskered chap above is, James Bryce was appointed Britain's ambassador to the United States in 1907 at the time of this cartoon. He was also a noted historian, and had earlier written a very influential book about the U.S. titled The American Commonwealth. The epitaph Blackman came up with seeks to wring humour out of all these aspects of this accomplished fellow, and succeeds for an audience more than a century removed in producing mostly head-scratching.

Come on back on Wednesday when Alex Jay will enlighten us more about Mr. Blackman's life story. 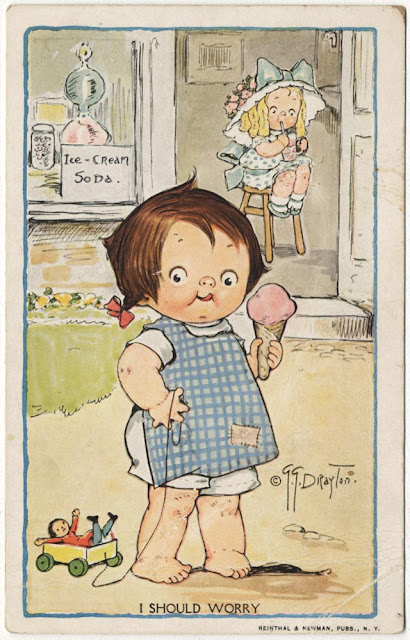 I find the cards in Drayton's Reinthal and Newman series to generally be very funny, but this one ... ? Sorry, I don't get it. Oddly the cards we've run for the past three weeks feature gags or elements that challenge my limited intelligence, so I guess I'm doing an unintentional sub-series of Wish You Were Here. I imagine I could keep this up and show you just how consistently dense I can be.
But I digress. This Reinthal & Newman card is number 497, while all the other cards I've featured so far were numbered in the 100s. Guess Drayton was brought back to do a later series, because I daresay she didn't produce 400+ card designs for them.

Comments:
The gag is probably something along the lines of the poor girl doesn't care if the rich girl gets ice cream, so long as she gets ice cream too. Frosty dairy novelties are the great equaliser.