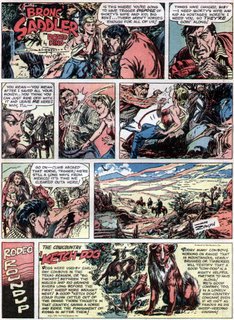 Bronc Saddler, The Rodeo King by Del and Herb Rayburn, writer and cartoonist respectively, ran just one year (1/14/51 - 1/6/52) from the New York Post Syndicate. The Post had a pretty good line-up of strips, but they just couldn't seem to sell them to many papers. This feature, entering a market that was already glutted with cowboy strips, didn't have much of a chance even though both the art and the writing were quite good. I don't know much about the Rayburns, but Del had written some western fiction for the pulps and produced a booklet titled The Rodeo Kings just before starting this strip. Herb Rayburn, whose art style on the strip was strongly pulp-influenced, went on to do some art for kid's books.

Far more rare than the Post Syndicate run of the strip is a second run that ran in the ultra-rare Arrow Comic Weekly comic section. This preprint section, apparently marketed mainly to small weekly papers, is so rare that a complete run of it has not yet been found. Jeffrey Lindenblatt has indexed the only partial run we've ever found, in the Manhasset Press. I have a total of just one incomplete section in my own collection. Bronc Saddler ran in this section from 10/29/53 or earlier until 12/17/53, this time credited to William Allison. My guess is that the name is a pseudonym for the Rayburns, but not having seen with my own orbs a single example of this strip in the second run I can't even make a guess on that count.

Comments:
My guess as to the identity of William
Allison was going to be the Harry "A"
Chesler shop artist and writer who did
some comic books in 1936/37, and was
good enough to be assigned covers (a
few of them are shown in Ron Goulart's
Comic Book Culture book).

William Merle Allison according to Jerry Bail's Who's Who and the askart.com site was born in 1880.
Unfortunately one has him dying in
1934 and the other in 1946.

So whether it is an alias on the 1953 Bronc Saddler is still a guess.

Hi DD. I think there's a much better chance that it is a pseudonym for the Raybuurns. First, they had the copyright on the strip in the first run, and it certainly wasn't such a hot property that someone would be likely to buy the rights. Second, the name William Allison could very well be a combination of two old West gunslinger names - William Bonney (Billy the Kid) and Clay Allison, making it an excellent pseudonym for a western strip.

I have one and and came here to find some more info. I picked it out of my pile of stuff because it has a 1953 Bruce Gentry strip on the front, signed by Scap (?) in a faux Ray Bailey style. Possibly a restart of the strip because of the succes of the movie serial? I will scan the whole thing in and give it some attention next week. Where can I acces the index by Jeffrey?

Hi Ger --
I am slated to write an article for the next Hogan's Alley about the Arrow Comic Weekly. I'm anxious to see your section since they are really, really rare!

Mine's from a differet paper than the one you mentioned. Possibly one more route to find copies or microfiche rolls? Eh... the name escapes me now. I'd have to go upstairs and have a look.

I looked up mine. It's a Walden paper from 1953-11-26. I can't make out the date on your sample, but it seems one year earlier with it's 11-18 date. On my Stright Arrow page is a number 5 in one of the first panels. Other strips are Debbie Dean, Gulliver's Travels, Bronc Saddler, Bruce Gentry and Son of the Buccaneer.

The paper is The Walden Citizen Herald, which seems to be still in business. at least the Library of Congress mentions some libraries holding the relevant years... so they may still be out there!

I am almost ready to put my scans up. With Bronc Saddler, Bruce Gentry, Straight Arrow and Debbie Dean we have for strips that were discontinued earlier, but restarted for this paper insert. Son of the Buccaneer seems like foreign strip and Guliver's Travels is by Funnies Inc, so it could be the Classics Illustrated version. And then there's the sf strip Galaxywhich I am still looking for.

just a note that William M. Allison was a regular on westerns for Jacquet. And certainly the style is similar - someone could compare more examples than i did to determine if it is the same Allison.

I have found what seems to be all eight Arrow sections on fultonhistory.co, a site that speecializes in in New York State papers. They start on October 29 1953 and run to December 17, with no new section on December 24 or 31 (even though in the last one a Scroogle adaptation is started that is supposed to be continued in the next issue).

Hi I have artwork that was drawn by herb and wanted to know how to contact his family. Would u have that info or know how I can get it?

I have finally come around to using the Arrow scans I have on my blog. I am putting them up starting from tomorrow, all eight of them. Interesting that my dates are the same as the ones you mention, which makes me wonder what the reason is for mention uncertain dates. As far as I can se it, it just ran for eight weeks.