Obscurity of the Day: The Pioneers 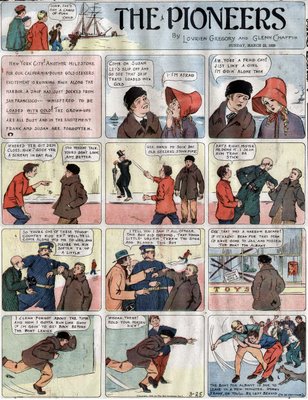 The Pioneers should be mentioned in any discussion of early adventure strips, though its short run and storybook style writing is enough to keep it from being much more than a curiosity. It is, though, only mentioned in one of the standard references, Goulart's Encyclopedia of American Comics (of which more shortly).

The story concerned itself with the trek of a group of families who leave the wilds of Maine to strike it rich in the California gold rush. This is a tale full of possibilities, but in the hands of writer Glenn Chaffin (later to create Tailspin Tommy) it is a real yawner. The art by someone named Lovrien Gregory (also sometimes spelled Louvrien) doesn't do much to help the cause. Initially the story was told exclusively in captions, but occasional word balloons began popping up later. Our sample strip is one of the few that used word balloons for most of the strip.

I must confess that I've not read the strip through to the end, despite having the opportunity, so I can't say whether it concluded with the group arriving in California or got cancelled in mid-odyssey; my guess is that the strip was intentionally closed-end. The run of the strip comprises 49 episodes based on my dating, so I wonder if there was perhaps an even 50 episodes in actuality (my dates come from a run in the Columbus Dispatch). Being from Bell Syndicate, it should come as no surprise that the strip continued to be sold after its initial running dates, so you may find later ones; the latest I've seen run in late 1929.

Jay Maeder, writing in Goulart's Encyclopedia of American Comics, claims that the strip was running in 1926, and that Glenn Chaffin was not the first writer. If Jay is reading the blog, perhaps he could tell us if this was indeed the case. I've never found the strip running earlier than the cited running dates, but maybe I have just never come upon the right sources. Jay, you out there?

Comments:
Hi Allan -- From an interview someday to appear in Hogan's Alley, here's Glenn Chaffin on THE PIONEERS:

"It wasn't much of a page. It was this historical drama. Lester Lear was writing the thing and he had this girl cousin who was drawing it, and then Bell took it over and Lester got too busy to write it and he asked me to do it. At the time I took it over the story had to do with the Erie Canal. I bought a book and read up on the Erie Canal. Can't remember much else about the thing. As I recall, the girl became ill and caved in or something. The page wasn't making any money anyway, and Bell just dropped it."

Lester Lear was Bell's Los Angeles rep, previously the guy who had hired Chaffin to write a Hollywood gossip column, subsequently the guy who introduced him to Hal Forrest. "Bell took it over" perhaps suggests the page might have earlier been running just locally someplace. Anyway, I guess I can't at this moment firmly document the 1926 start date, but that was certainly my impression.
jm

I guess the thing must have been running in some paper out in California, which makes sense then that the story is about trying to get there for the gold rush.

Just goes to show, for every question you answer you generate more to replace it.

Thanks very much for the great info Jay!

Well, come to think of it, the mid-20s would have been the 75th anniversary of the 1849-52 gold rush, yes? I suppose any number of boom communities would have been proudly celebrating their diamond jubilees, and I'd bet there's half a chance Lear sold his strip to more than just one small-town paper.
jm

Just for the record, Lovrien Gregory (1888-1972) was the half sister of Lester Lear's wife, Isadora Schmidt Lear. Lovrien's husband, master architect Julius Gregory, was the grandson of French immigrants who came to Sacramento during the Gold Rush, which may have inspired the story. Julius's father, Eugene, was briefly mayor of Sacramento. Lovrien is my grandmother, and to read about her life and artistic achievements, google "annogram" and "lovrien price".