Obscurity of the Day: Silly Philly 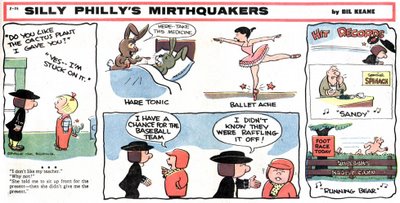 Before Bil Keane became an American institution with Family Circus, he was on staff at the Philadelphia Bulletin for many years, and produced the long-running local feature Silly Philly. The title character was a quaker, emblematic of the city of brotherly love.

The feature started in the back pages of the paper's Sunday Fun Book on 4/27/1947. The Fun Book featured Will Eisner's The Spirit plus additional local features like Sports Stars and It's Philadelphia (both of which will probably pop up here eventually as obscurities of the day).

The Fun Book eventually folded, and Silly Philly was promoted into the paper's regular Sunday comic section. There it ran until 9/3/1961. Presumably Keane decided to end the feature as the Family Circus gravy train started rolling.

Comments:
Bill Keane also did a gag sunday about television called Channel Chuckles in the late fifties ealry sixties. I have one in an imageshack account. Here's the link: http://img369.imageshack.us/my.php?image=billkeanechannelchuckles0ge.jpg

Well, let me ask in advance then if there is a connection between the two syndicates and how and why he should work for them.

Couple years ago, there was a "Family Circus" Sunday where Billy was watching "Silly Philly" on television. I think I still have that somewhere.

Hi Ger-
There is no connection between the Philadelphia Bulletin and the Register & Tribune Syndicate (which is based in Des Moines Iowa).