Obscurity of the Day: Conquest of the Air 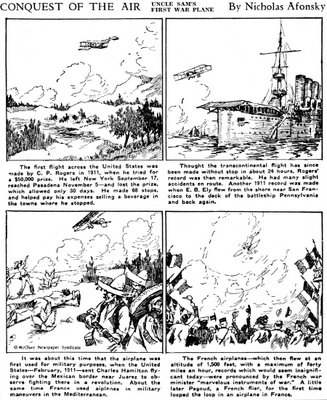 Blogging once again took a back-seat to that bugaboo, real life, this week. My dad has been experiencing chest pains for the last few months, and finally went in to see a doctor last week. He was diagnosed as having plaque in the veins around his heart, and the cure was to put in some stints via arthroscopic surgery. That procedure was attempted on Friday with no success, then again on Saturday when the doctor poked a hole in the vein while trying to get his instrument through the plaque. That led to open-heart surgery yesterday. Dad is now the proud owner of a double bypass, and is expected to fully recover. So what with the 40 mile commute to the hospital, blogging has once again had to take its rightful place somewhere well down on the priority list.

So today just a quickie. Here's a sample from Nick Afonsky's Conquest Of The Air, a historical series chronicling man's quest for flight. Flying was on everybody's mind in the 1920s, especially after Lindbergh's trans-Atlantic flight in May 1927. McClure Syndicate attempted to capitalize on it with this 48 part closed end series of strips. The original run seems to have been August 1 through September 24 1927, but McClure continued to sell the series at least as late as 1931.