Obscurity of the Day: Buckley 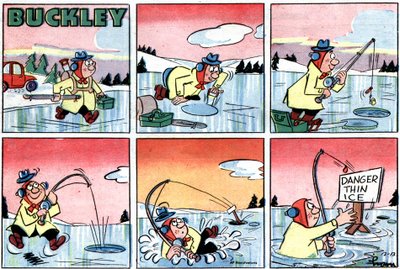 Going back to the AP beat today, we have Buckley by Joe Cunningham. The daily version of the feature, a panel cartoon, began on January 6 1947 as Hit 'n Run. The Sunday followed, starting on January 26. Sometime around 1951, at least according to the E&P listings, the strip was renamed Slice 'o Ham, a reference to Cunningham's signature on the feature, which was 'ham'. The Sunday was, however, named Buckley by 1950 (my earliest example), and my guess is that the Sunday was probably so titled from its inception.

Again going from the E&P listings, the strip was renamed to Buckley on both the Sunday and daily in 1953, and the title hopscotch was now put to rest. The Sunday ended on 3/6/1955, but the daily continued on to 1961, probably surviving until the end of comic syndication by the AP on 12/30/1961.

My files on this feature are awfully spotty, so if anyone has any dailies or Sundays in their collection that would help to pin down the titles I'd love to hear from you.