Obscurity of the Day: Bruno and Pietro 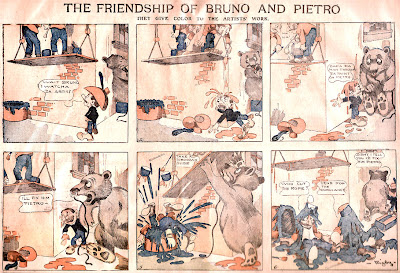 Sorry for the awful scan on this one. It seems that if an old paper has the least little bit of wrinkling to it that no matter how flat you press it on the scanner the wrinkles somehow prevail and insist on being the star of the show.

This simple but cute strip about a performing bear and his master is well drawn by another of those unjustly forgotten cartoonists, Clarence Rigby. Rigby spent most of his comic stripping years at World Color Printing, where he was one of the few artists who stuck with the company for a long stretch.

It's not hard to believe that for the rural folk who formed most of the audience for the WCP sections this strip about a circus duo was a particular delight. The arrival of the small itinerant circuses of the day, many of which would have featured bear acts much like this duo (sans the ursine loquacity), was an eagerly anticipated event for young and old in these towns. A weekly reminder of those joys in the comic section would be most welcome indeed.

Rigby must have had his own particular fondness for Bruno and Pietro because he produced three separate series of the strip. The first was in 1904 from July 3 to November 6. Our sample above comes from that first run. He returned to the strip in 1906, from March 25 to May 13, and then again in 1908, from October 18 to January 31 1909.

Comments:
Hello, Allan-----Were BRUNO AND PIETRO ever shown as part of a circus? I think Pietro is more of a street performer. I've seen many images of Italian organ grinders with trained bears at the turn of the century, much as they would later be exclusively monkeys. ---Cole Johnson.

Excellent point Cole. I wasn't certain either. When I was writing the post I initially said he was a hurdy-gurdy man, but then I checked Alfredo Castelli's book and he shows a sample where they are indeed in a circus. I have to agree, though, that the circus was often not the location of the action, or at least it was often not central to the plot, such as it was.

Really nice, congratulations!
I invite you to visit my work at:
www.ruisousaartworks.blogspot.com