Obscurity of the Day: Professor Gesla 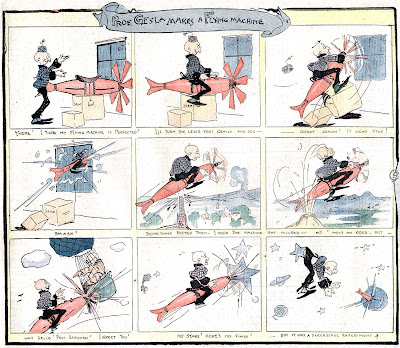 Here's a nice early mad scientist strip, in fact darn close to the earliest I can think of. The Chicago Daily News' The Absent-Minded Man, which featured a forgetful scientist, edges it out by about a month, but the accent in that strip was more on his poor memory, and Willie Westinghouse Edison Smith, about a boy inventor, beats it by about 7 months.

Anyhow, of the three Professor Gesla is certainly the most typical of the mad scientist strips that would be very popular in the decade of the 1900s, so we can probably give it the nod as the first to fit neatly in that genre.

The strip was penned by the great, though sadly almost forgotten, Clare Victor "Dwig" Dwiggins, one of the most popular creators of the first few decades of the century. His wispy, delicate linework and boisterous characters were much imitated and his services were highly sought, and so he flitted from syndicate to syndicate, presumably lured on from place to place by offers from covetous editors.

He produced Professor Gesla for the Philadelphia Inquirer, which as far as I know was the very first syndicate he worked for. He produced continuing strips for the Inquirer from 1900-1902, then disappeared for awhile from newspaper comics. He got pretty heavily into illustrating books for a time before returning to the fourth estate.

Professor Gesla appeared on an infrequent basis between February 3 1901 and March 30 1902. Dwig produced just 10 episodes in all of the series.

Thanks very much to Cole Johnson who supplied the sample of this strip.

Comments:
You're absolutely right, Dwig has been unfairly forgotten. Allan, do you think that "Gesla" might have been a play on Tesla?

Hi Hugo --
Absolutely; Tesla was much in the news in those days. Cole also pointed that out when he sent me the sample. Leave it to my sieve-brain to forget to mention it.