Obscurity of the Day: Be Scientific with Ol' Doc Dabble 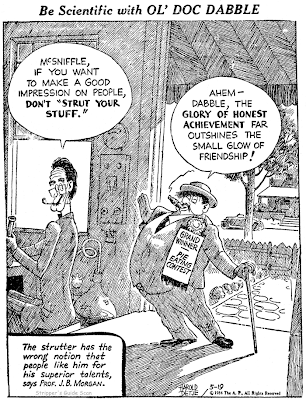 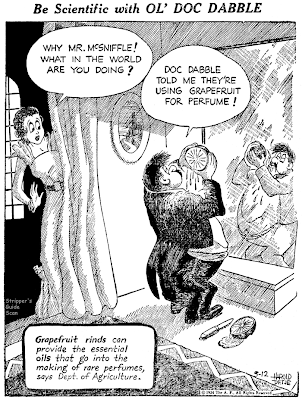 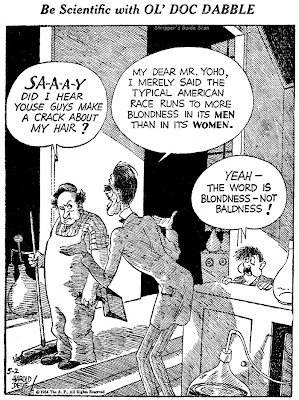 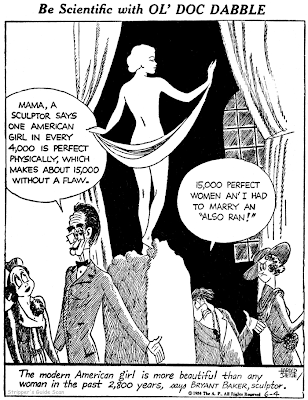 In the 1930s it seemed like every Artie, Inky and Chalkie was pressed into service to duplicate the success of Robert Ripley's huge hit, Believe It or Not. When the inevitable time came for the Associated Press to add yet another 'me-too' feature to their comics page offerings, though, bless their hearts for taking the road less travelled.

Be Scientific, as the feature was initially called, started out as pretty much a straight clone of the Ripley feature. The only differences were that the daily panel (there was no Sunday for any AP feature until much later) concentrated on one subject per day instead of the scattershot approach favored by Ripley, and the accent was on science factoids rather than on oddities.

Harold Detje, the creator of the feature, soon tired of his clone act and introduced a pair of characters to his panel, Doc Dabble and his sidekick, McSniffle. The panel got a new name, Be Scientific with Ol' Doc Dabble, and the factoid of the day was now the subject of the day's gag. Some gags worked well, some didn't, but at least Detje was doing something different than the rest of the pack. The new format also showcased Detje's cartooning skills rather than his technical drawing, which wasn't exactly making for a graphically interesting panel.

The AP had a set number of features, and Be Scientific replaced Al Burtis' cartoon panel when he was reassigned to producing a strip, The Dillys. Be Scientific debuted on June 6 1932 and ran until June 15 1935, when it was in turn replaced by Oaky Doaks.

According to my admittedly quite fallible memory, Detje dropped the feature to become syndicate editor for the AP. I'm pretty sure I read that somewhere, but I can't come up with the source at the moment.

My name is Jennifer Thelen-deGreef and I am the great granddaughter of Harold Detje. I was so pleased to read the info you have here and to see some of his works that I never have before. I do believe that your info is correct regarding Harold becoming syndicate editor for the AP. If I can add anything later I will gladly contact you in the future.

Thanks for writing Jennifer! Anything else you can tell us about great grandpa would be warmly welcomed.