Obscurity of the Day: The Cynic's Corner 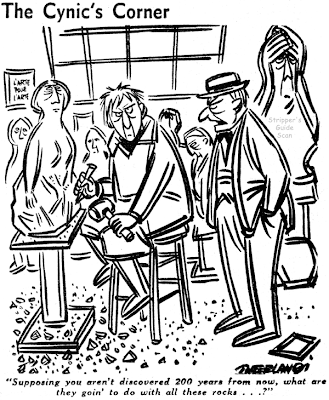 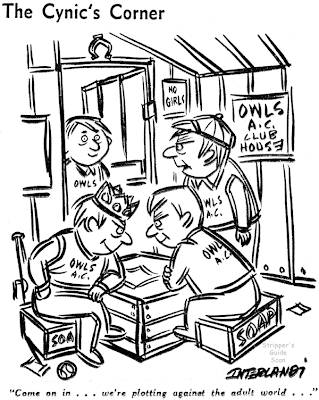 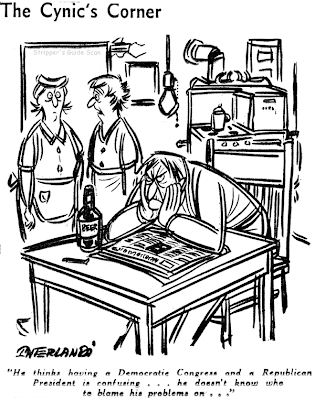 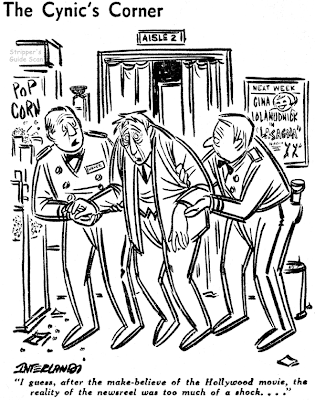 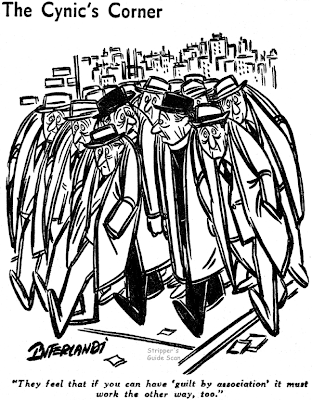 We seem to be in 'lesser-known brother' mode here at Stripper's Guide this week. The Cynic's Corner was penned not by Phil Interlandi, the famed Playboy cartoonist, but brother Frank.

Frank was primarily an editorial cartoonist; he worked for the Des Moines Register in the fifties, and then the LA Times in the sixties. Unfortunately I lose track of his career after that -- anyone know what Frank was up to later on?

The Cynic's Corner was drawn using a fascinating double-line technique. I've seen cartoonists employ similar conceits, but Frank Interlandi really used it to great advantage -- the cartoons just seem to pop right off the page. Combine that interesting art with the delightfully pungent gag lines and you have to wonder why in the world this is an obscurity.

My guess is that the Register and Tribune Syndicate's salesmen just didn't push the feature. Perhaps they though the cartoon series was just a sop to the staff editorial cartoonist and of little consequence. 'Tis a shame.

The Cynic's Corner, which was often run as an untitled feature (and the listings in E&P didn't suggest a name) ran from October 12 1953 until sometime in 1956.

Comments:
Perhaps the common wisdom of the time saw more humor in depressed, neurotic children (Peanuts) rather than adults. These grown up cynics may have been a little too close for comfort.

While researching the war work of Harvey Kurtzman I found that Frank Interlandi was also the staff cartoonist at the Paris, Texas training camp paper, the Maxey Times.

Here's what I know: He received a fine arts degree from the University of Iowa in the 1950s. He began his career at the Des Moines Register, while pursing a master’s degree. He then worked as the second cartoonist to Paul Conrad at the Los Angeles Times, where he worked from 1962 to 1981. The focus of his work was more social than political. He made his home in Laguna Beach, California for nearly 50 years, moving there around 1962 to be near his brother. His twin brother, Phil Interlandi, was also a cartoonist. He belonged to a group of Laguna Beach cartoonists that met on a regular basis, and included: Virgil (VIP) Partch, John Dempsey, Dick Oldden, Ed Nofziger, Don Tobin and Roger Armstrong. When not cartooning, Interlandi painted. He died on April 4, 2010.

PS - Had the opportunity to talk to him at length in 2006 when Martha and I prepared Cartoon America. Wish I had taken better notes.

I remember reading/looking at, and greatly enjoying the Cynic's Corner in the Toledo Blade back in the late fifties and early sixties.
Here's a link that includes a cartoon from 1963: http://news.google.com/newspapers?nid=2199&dat=19631017&id=fi4yAAAAIBAJ&sjid=t-UFAAAAIBAJ&pg=2192,1464170