Obscurity of the Day: The Giddy Goblins - Hans and Hassan in Fableland 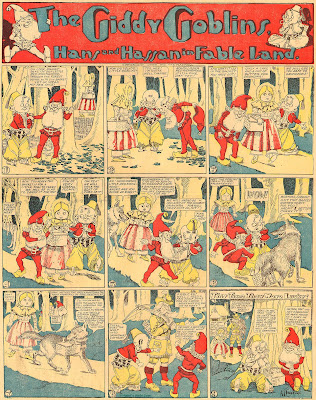 Here's yet another example of the good art/bad writing combination that was a hallmark of the Boston Herald's syndicated Sunday sections. Here we have The Giddy Goblins - Hans and Hassan in Fableland, a strip about a pair of elfen mischief makers, one a German and the other -- well, I'm not sure. A turk? An arab? Anyway, the strip injects these two fellows into well-known children's stories with not very hilarious results. The emphasis seems to be on how much dialogue can be squeezed onto a page rather than what humor might be wrung from the story.

A.T. "Crite" Crichton, who had a distinctive unvarnished style, was the perpetrator of this series, which ran from January 18 to August 30 1908. Crite was a freelancer who also had a few strips appear in the New York World, the New York Herald and the World Color Printing section in a cartooning career that I can track from 1904-1911. What he did before and after that I dunno.

Comments:
Cretin, I mean, Crichton also did a thing for the Philadelphia North American Company called "Little Growling Bird in Windego Land" about a precious little blonde girl who is shown the precious ways of the red man by a precious little indian brave and his precious little animal pals. The verbose captions gave everything multi-syllabic, phoney-baloney tribal names as they explained the little to nothing that happened over the full page stories. Dig some up and you'll enjoy them as much as I have.