Obscurity of the Day: Desperate Desmond 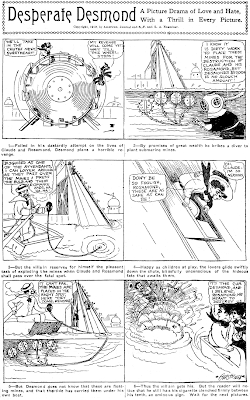 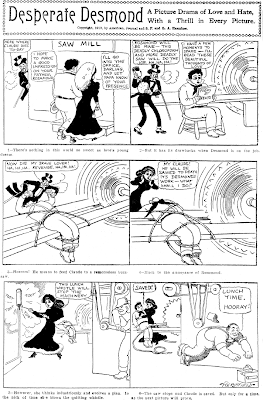 Most everything I wanted to say about this feature, and more, has already been said over on Don Markstein's Toonopedia, so I think I'll just take the easy way out and direct you over to that page for information on Desperate Desmond.

I'll stick around only long enough to disagree with a few bookkeeping details; according to my info the strip started on March 11 1910, not March 10, and ended October 15 1912, not June 13. I also wondered if Desmond really did continue by that name in the Dauntless Durham strip, but since I'm unable at the moment to locate the reprint book of that strip I'll demur. As regards syndication of the strip, the Hearst company National News Association was in charge.

Comments:
Such a huge departure from Abie the Agent!

Josh Lambert. “"Wait for the Next Pictures": Intertextuality and Cliffhanger Continuity in Early Cinema and Comic Strips.” Cinema Journal 48, no. 2 (2008): 3-25.

...I could send you a copy if you're interested...

Hi Tad --
Thanks for the offer, but when I see words like "intertextuality" in the title of an article I know I have no desire to go further. I'm allergic to academese.

I'm going to have to call you on this one Allan.
If you direct me to a Toonopedia page or, say, page 202 of Horn's Encyclopedia then I think you're extending the meaning of 'obscurity' a bit too much.

Though the idea of creating another titled posting about correcting mistakes in the books sounds intriguing.

Hey DD --
Cut me some slack, buddy! Strip ran for two years 99 years ago and it doesn't qualify as an obscurity? You are a stern taskmaster.

Actually I just really wanted to share those two great samples, obscurity or not. The uber-classic buzz-saw strip and the way cool strip set at Coney Island. That's a heck of a lot better than those blurry single panels you got over at Toonopedia or in Horn's book wasn't it?

Hello, Allan----I suppose that since the 1970's, with the Hyperion collections and the World Encyclopedia of Comics, many strips that were actual obscurities are now better-known than they were back in their day. One of the most obscure oddities ever were the 1906 Feininger strips for the Chicago Tribune. It was hardly a success, but today they're considered a towering achievement of the art form. ("Success" doesn't always mean good. Some strips that nobody today could possibly care about, i.e. THE OLD HOME TOWN, MR. AND MRS., FRECKLES, etc. went on for yearsnyearsnyears.)-------Intertextually yours, Cole Johnson.