Obscurity of the Day: What Can a Poor Woman Do? 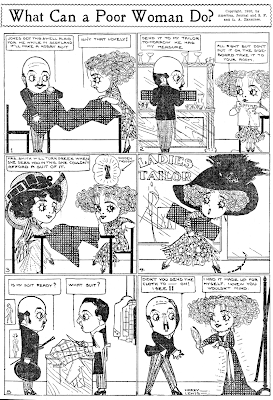 Harry Lewis had one of those styles that is easiest to describe in terms of his contemporaries. Take equal measures of F.M. Howarth and William Marriner, then combine with a dollop of Nell Brinkley. Harry liked to apply his skills to drawing pretty girls, or at least what a pretty girl might look like if she had a giant head (or are those normal size heads on tiny, withered bodies? Such existential questions no doubt plagued him as they do me).

His odd creations were all over the Hearst papers for a short while, mostly confined to 1909-10. What Can a Poor Woman Do? was his longest-running strip in the period, it ran in the New York Journal from April 16 1909 to September 8 1910.

Lewis' work also popped up frequently in the humor magazines and he was a mainstay with his newspaper Sunday magazine illustrations.

Comments:
Hello, Allan----So why was it important that we know that the bolt of cloth was moved to the man's room? Then the girls are hanging out in the husband's room, I suppose? ----Cole Johnson.

I get the feeling when I'm reading these that I'm looking at Betty Boop's less well endowed grandmother ...

Kinda looked to me like Lewis started out with a different gag in mind, then switched gears. Since it ended up a pretty weak gag anyway, the original idea must have really been a stinker.