Obscurity of the Day: Professor Prestochange 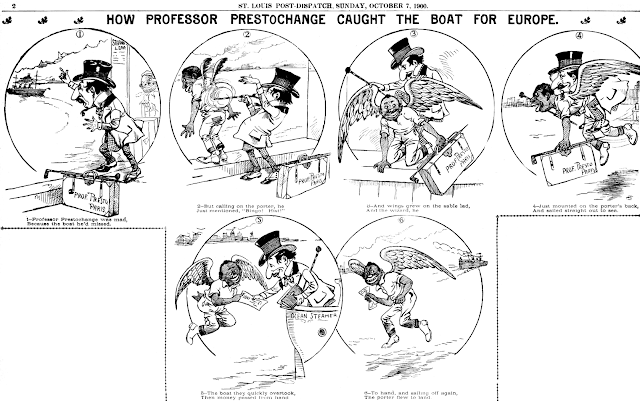 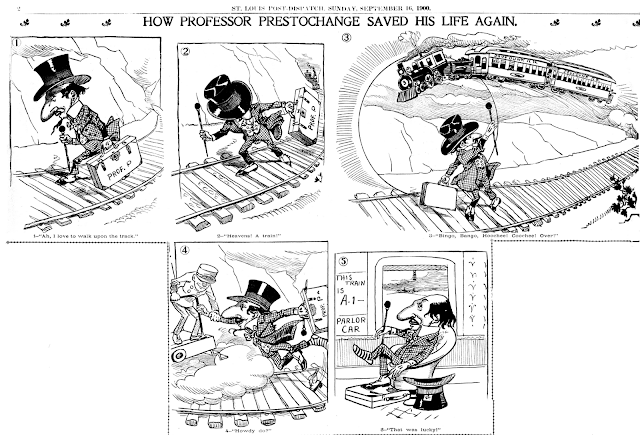 Here's a real moldy oldie from the files of Cole Johnson, a New York World Sunday series that somehow managed to fly under the radar of Ken Barker's index of that paper. Or perhaps not -- since Barker indexed by artist, he just might never have seen one of these signed, as these two examples aren't, and so it didn't qualify for his index. Professor Prestochange, a magician strip which ran from July 22 to October 21 1900, is, Cole tells me, by a fellow who signed himself C. Howard. Beyond that I haven't much to say other than the strip certainly is graphically fine and shows a pretty good grasp of comic strip conventions and timing for a fellow who has only this one credit to his name.

Comments:
Hello, Allan---The artist was Charles J. Howard, who's main claim to fame was the creator of the comic, or "Vinegar" Valentine in the 1870's. He drew hundreds of these for McLaughlin Bros. printers in Brooklyn, for more than thirty years. ---Cole Johnson.

This blog has to be one of the most important and exciting art sites on the net. I'm amazed that you and Cole Johnson are able to find so many treasures that nobody else knows about.