Obscurity of the Day: Easy Edgar 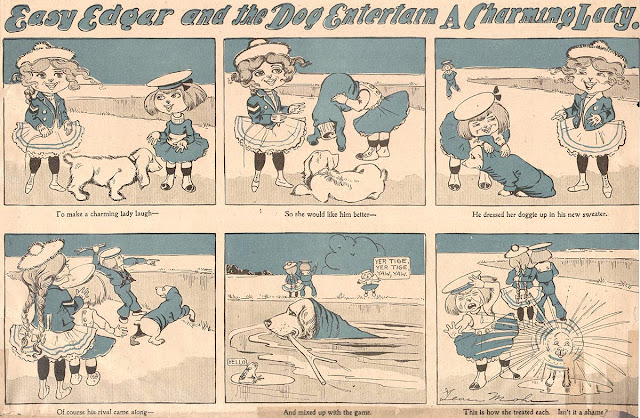 The word 'easy' here in Easy Edgar is used in the sense of vulnerability, as in an easy target. Poor little Edgar, dressed by his mama in what for all the world looks to be a tutu, is trying to impress (no mean feat when you're wearing a tutu) only to have the rug pulled out from under him.

This series ran for only five episodes in the Philadelphia North American between November 23 1902 and May 3 1903. Jean Mohr, the cartoonist, used her space for her Sallie Slick strip much more often.

Still no definitve word on whether Jean Mohr was a man or a woman.

Comments:
Eugene Noble Mohr was born on April 30, 1877 in Lycoming County, Pennsylvania, according to his World War I draft card. He was the only child of William and Emma. Mohr's middle name was his mother's maiden name.

Mohr resided in Philadelphia when the 1900 census was recorded. He worked as an artist for a newspaper. His parents lived in Muncy, Pennsylvania. The Gazette and Bulletin (Williamsport, Pennsylvania) published this item on October 8, 1902: "Jean Mohr, of Avon-by-the Sea, N. J., is visiting his mother, Mrs. Emma Mohr, on North Main street."

In the 1910 census, Mohr's mother, a widow, was still in Muncy. The Gazette and Bulletin published this brief item on January 5, 1911: "Jean Mohr has gone to Philadelphia, where he will spend the winter." When Mohr registered for the draft in 1918, he was living with his mother. On the draft card hIs occupation was "newspaper artist, various employers".

In the 1920 census they lived on North Main Street in Muncy. His occupation was "artist, at home". "Jean Mohr" was the name recorded in the 1930 census. His mother was 72 years old. Mohr gave his occupation as "illustrator" in the "magazine" industry.

The Lycoming County Genealogy Project recorded some of the names at the Muncy Cemetery. Mohr and his mother were buried there; he died in 1961.

In addition to the coverlet and quilt makers, there are other
artists featured at 40 N. Main Street. Lining the front stairway
wall is the Jean Mohr Collection which includes examples of
his work in pencil, charcoal, watercolor, and oil.

Leave it to our friend Alex Jay to solve a long-standing puzzle as this one! Good work!----C.J.

1907
Nov. 15, page 8: Jean M. [sic] Mohr, the well known cartoonist, one of the art staff of a New York daily, has decided to make Muncy his permanent home. Mr. Mohr will continue to sketch for the New York papers, and will also manage the insurance business of his late father, W. E. Mohr.

1910
Feb. 8, page 3: A number of excellent illustrations in the current issue of Good Housekeeping were drawn by Jean Mahr [sic] whose home is at this place [Muncy].

Thanks for all that great info Alex. Sounds like Gene/Jean Mohr was a bit of a momma's boy.

I guess Trina's going to have to expunge Mohr from future editions of her women cartoonists books.

Would a reader in 1902 have had the same reaction I did to the first panel -- along the lines of "Which of these two characters, both with long hair and wearing dresses, is supposed to be the boy?" Or would Edgar's appearance have been perceived as recognizably male by the standards of that era?

Good question, Anon. Edgar's 'skirt' was certainly not standard issue to boys beyond the baby stage. The telltale sign is the hair. Fashionable little girls wore their hair long, in limp curls, whereas Edgar has a boy's bowl cut. No self-respecting little (upper class) girl would have had that haircut.

As for the skirt, well, from Alex's bio I would say that Jean might just have liked the idea of boys wearing girly clothes, if you catch my drift.