Obscurity of the Day: Drowsy Dick 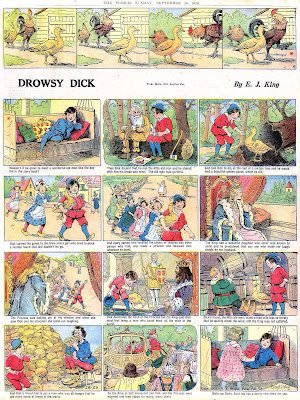 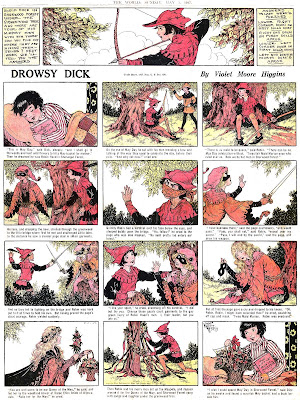 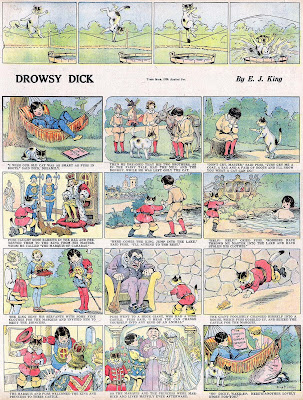 No, no, it's not a strip about the benefits of Viagra, though this snoozer might have benefited from a little blue pill.

When the New York World expanded its Sunday comics section in 1926, Drowsy Dick was one of the new additions on September 12. In a concept that had been done before, and done better, a kid is injected into various classic fairy tales. Unlike strips that managed to muster up an actual point of view, though, the kid doesn't seem to have any effect on the telling of the stories. He simply takes the place of a character, or tags along for the ride in the awkwardly adapted tales.

The original creator was Ernest J. King, a fellow who  has no other credits that I can find. While his art isn't all that memorable, it's pretty darn impressive stuff for a guy who seems to have left no tracks other than four Sundays he did for this series.

Yep, that's right. He was canned after a mere four pages, barely had his feet, or rather his brush, wet. The good news is that his replacement wielded a pretty fabulous pen. Violet Moore Higgins, a criminally under-celebrated cartoonist and children's book illustrator, took over on October 10. Her lush brushwork almost makes us forget that the stories continue to be stilted and unoriginal. At least we have plenty of eye candy to look at. As Higgins settled in, she seemed to at least wield enough control over the feature that the stories were made more manageable. Rather than trying to retell an entire fairy tale story in twelve panels, her version more often focused on a single vignette as in the example shown here.

My assumption is that neither King or Higgins did the writing on this strip, but rather it was the work of some anonymous staff writer, one who seemed to have no feel at all for comic strip pacing. No great loss that the writer took no credit since it would not have done his or her resume any good.

Drowsy Dick continued as a Sunday page until May 29 1927. But Dick wasn't sent off for the eternal slumber just yet. On September 30 he reappeared, this time in a daily strip that, as best I can  tell, appeared only in the New York Evening World. Dick continued his snoozy adventures in the new format until April 14 1928.

The following information is from the family history book, "The Wights: Volume 2" (Gateway Press, 1977), page 52:

Violet Idelle Moore, born November 28, 1886, Elgin, Illinois, married March 12,
1910, Edward Roberts Higgins, born September 26, 1877, San Francisco,
California. He was a Captain in the Philippines Constabulary during and after
the Spanish-American War. He became a newspaper artist and worked for
many years for the N.E.A. division of the Scripps-Howard chain. He died New
York City, February 3, 1949, Violet died July 30, 1967, New York City. She
had for many years been a writer and artist of children's books. She produced
a comic strip for the New York World for many years called "Drowsy Dick". In
the late fifties and early sixties she produced a daily children's feature called
Junior Editors, syndicated in more than 150 United States newspapers. She
wrote and illustrated more than a dozen books and illustrated many more.

In the 1910 U.S. Federal Census, the couple and her mother lived in Chicago, Illinois at 3528 West Van Buren Street. Edward was an artist at a newspaper; Violet was an artist. The Higgins eventually moved to Cleveland, Ohio. Her illustrations appeared in books as early as 1916. The Cleveland Plain Dealer reported on October 4, 1919 that the Higgins spent their summer in New York City.

In 1920 the couple lived in Cleveland at 3518 Prospect Avenue. Their occupation was artist at a newspaper. They soon moved to New York City where their son, Lindley, was born on October 17, 1922. Violet took over the comic strip, "Drowsy Dick," on October 10, 1926. The identity of Ernest J. King, the previous artist on the strip, will be explored in Part 2.

In 1930 the Higgins lived in the Bronx, New York at 5661 Post Road. His occupation was commercial artist; her occupation was illustrator. The couple worked together on at least one project, "The Three Musketeers," which was edited by Violet and illustrated by Edward. It was published by the John C. Winston Company in 1931.

Mrs. Violet Moore Higgins, a retired newspaper artist and children's book
illustrator, died Friday at Montefiore Hospital in the Bronx after a long illness.
She was 80 years old and lived at 5661 Post Road, the Bronx. She was the
widow of Edward R. Higgins, also an artist.

Mrs. Higgins, a native of Elgin, Ill., created the comic strip known as
"Drowsy Dick," which ran in the New York World in the 1920's. She drew
a two-column children's feature called "Junior Editors" for the Associated
Press from 1954 until her retirement in 1963.

She was the illustrator for a number of children's books, including "Heidi"
and "Hans Brinker" and she wrote and illustrated "The Real Story of a Real
Doll."

The New York World was aware or made aware of Violet's children's book illustrations and approached her to draw the strip, "Drowsy Dick." She was busy illustrating books and may not have had enough time to complete the first four Sundays, so she arranged for her husband to fill in for her, probably with the World's approval. Maybe she laid out the panels and he did the finished art. Edward chose to use the pseudonym, Ernest J. King.

Ernest Joseph King was born in Lorain, Ohio on November 23, 1878. During the Spanish-American War, King served as a cadet aboard the USS San Francisco. Edward also served during the Spanish-American War, so it's possible he and Ernest crossed paths. If they did not meet at that time, perhaps it was later in Ohio where the Higgins resided. Ernest moved to Annapolis, Maryland where he graduated and taught at the naval academy. He may have visited Ohio to see friends and relatives, and might have met the Higgins at some social event. But if they did not meet in Ohio, maybe it was in New York City. They may have met at a reunion of Spanish-American War veterans.

I think Edward knew Ernest and acknowledged him by signing his name on the strip. Ernest would go on to distinguish himself. According to the web site Ohio History Central, it was during World War II that "President Franklin Delano Roosevelt combined the office of Commander in Chief of the U.S. Fleet and the Chief of Naval Operations. He appointed King to this position. King was the only person to hold this office. In 1944, he attained the rank of fleet admiral."

Hi Alex --
An interesting possibility that Edward Higgins was involved. Comparing this to his NEA work I do sort of see similarities. However, I don't really see the sense in using the King name as an homage to the navy man. Stranger thangs have happened tho...

Thanks for the bios!

Hello, I just discovered who drew a piece of art I have. E.R. Higgins with possible collaborations with his wife Violet Moore Higgins! It comes from a book titled Helter Skelter Land, published in 1921 authored by Olive Roberts Barton in the Nancy & Nick series by Olive Barton. I haphazardly stumbled on the book via ebay and noticed the striking similarity in the art I own titled on the bottom which now I can make out as Helter Skelter Land. I then noted via the book that the illustrator is E.R. HIGGINS but could not find anything about E.R. Higgins however via askart I saw there was another Higgins with strikingly similar art in the childrens picture book field during that same era. Earlier today I thought E.R. Higgins may be a pen name for Violet Higgins, then found out through researching her that her husband is E.R. Higgins which led me here. The art in the Nancy & Nick Series by Barton was reviewed as "Fantastic" back in the day, but was confused how such an artist could disappear. AMAZING! Perhaps after you look into this a bit, you can give credit or link to the books mentioned, as they are quite collectible and do have wonderful pictures. They deserve the proper recognition. Thank you for your insight into the history of this husband and wife team!