Obscurity of the Day: Star Trek 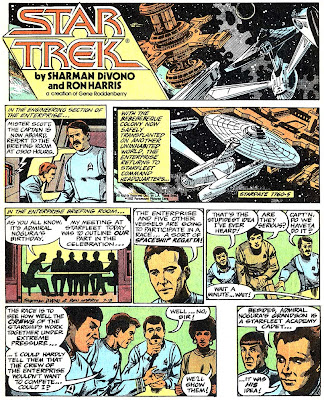 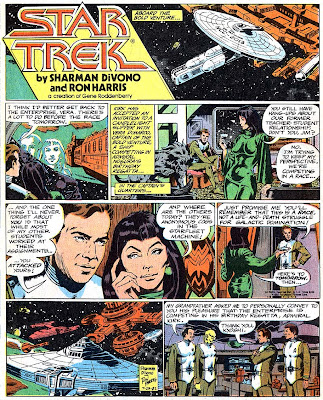 Armies of Trekkers worldwide waited with bated breath for the release of Star Trek: The Motion Picture in December 1979. Released a full decade after the end of the original television series, the project was bolstered in Hollywood by the phenomenal success of Star Wars, signalling that an SF film with a built-in fanbase could be a profit bonanza of huge proportions.

The first Star Trek film was released with all the fanfare of the Second Coming, which it practically was to its legions of fans. Every imaginable marketing gimmick was put in play, including a newspaper comic strip series that debuted the week before the film's release.

Titled simply Star Trek, the daily and Sunday strip distributed by the LA Times Syndicate began on December 2 1979 and was at first written and drawn by Thomas Warkentin with a considerable amount of both credited and uncredited assistance. The pressure to produce a strip about the Star Trek franchise was enormous, and Warkentin really worked hard to rise to the challenge. Though the art was uneven, at least most of the character faces were all eminently recognizable, which is half the battle in these features. The stories were rather ridiculously simple, but what can one expect from three panels a day, with all plot points regurgitated on Sundays.

Unfortunately the Star Trek comic strip came about at a bad time which only stacked the deck against it. The Star Wars strip had debuted earlier in the year, as had the new series of Buck Rogers. The market being glutted (if three strips can be considered a glut), Star Trek attracted few newspaper editors. With a small client list, and thus small profits, the strip soon took to looking cobbled together, very much in the same way as the ill-fated Dallas strip, which shared many of the Star Trek strip's creative team.

Warkentin's run on the strip extended a little less than a year and a half, ending April 1981. Among the art assists he received were from Ron Harris, who received sporadic credit as early as August 1980, Mark Rice (credited in July 1980), Dan Spiegle, Duke Riley, Kurt Warkentin, and someone named Yang. Art Lortie says that Yang was an office boy who occasionally got a credit for inking backgrounds and lettering. Warkentin often failed to sign the strip during his tenure, leading me to assume that there were plenty of uncredited assists as well.One uncredited writing assist was from Tom Durkin, a copy editor at the LA Times.

Warkentin was replaced by the team of writer Sharman DiVono and artist Ron Harris, which also lasted a little under a year and a half, ending September 1982. Harris did a better job with the art than Warkentin and company, and DiVono was a more accomplished writer, so the strip looks and reads better during this period though it continues to be uneven. Harris called for art assists from Tom Warkentin, Paul Chadwick, Terry Robinson, Alan Munro and Laurie Newell during his stint, and DiVono snagged famed SF author Larry Niven to help with the writing on her last story.

Star Trek: The Motion Picture was considered a major flop, artistically if not at the box office, and the comic strip series was really limping along by 1982. However, the second Trek film, Star Trek: The Wrath of Khan was released in June 1982 to critical and fan accolades, giving the strip a second chance to become a hot property.

Unfortunately the strip went into a tailspin. In September 1982 comic book writer Marty Pasko and artist Padraic Shigetani took over, and the Sunday was cancelled on October 24. The writing by Pasko was passable, but the Shigetani art was, frankly, painful to look at. Pasko and Shigetani bailed on February 12 1983, to be replaced by another comic book writer, Gerry Conway. Shigetani was replaced by LA Times staffer Bob Myers (my notes have him assisting Shigetani, but I gather I have that wrong) . I've only seen a single example of Myers' art, which looks to be passable but uninspired. Then excellent comic book artist Ernie Colon came on board May 9 for one story. Colon may be great, but his, er, exotic interpretation of the Star Trek universe was way too oddball for newspapers. Colon received art assists from Alfredo Alcala and someone named Serc Soc (?). The final cartoonist on the strip was Dick Kulpa, starting July 4 1983. Kulpa can do appealing work, but he was hopelessly over his head on this material. In my opinion, though, the Shigetani run had long ago blown any chances the Trek strip might have had for a revival. The strip ended on December 3 1983.

Comments:
I remember this one turning up for maybe two Sundays in the San Francisco Chronicle, plainly drawn with some story about a literally two-faced alien monarch. The Lone Ranger and Star Wars, both with a lush comic-book look, also made fleeting appearances. They all felt like the last gasps of that particular type of movie tie-in.